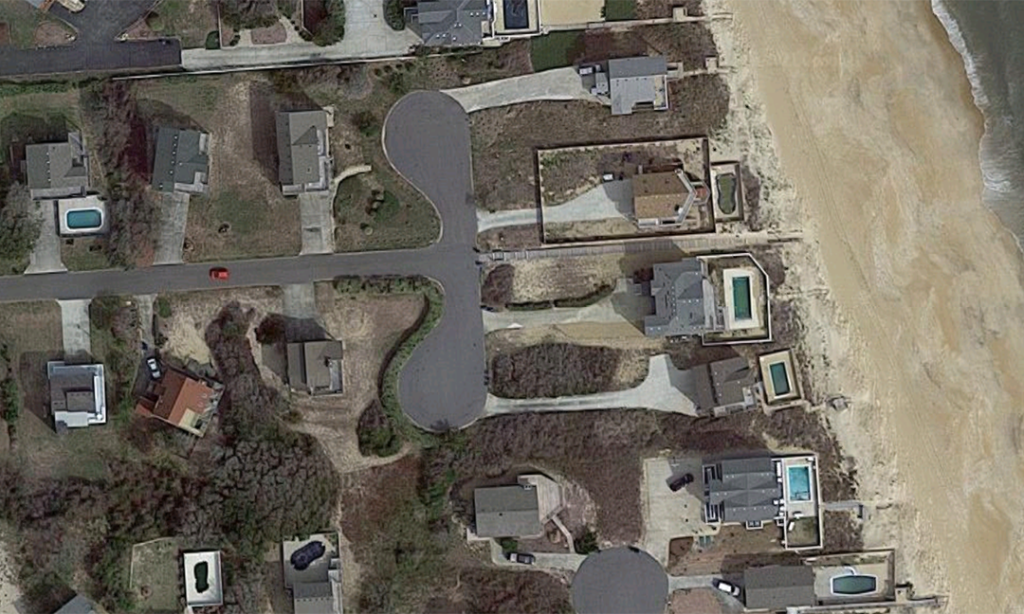 The area of the beach access in question in Duck. Google Maps image

A North Carolina Court of Appeals opinion issued April 6 says private beach accesses in Duck are private and not open to public use.

The case originated after Robert E. Hovey was taken into custody at Seabreeze Drive on May 29, 2019, and charged with second-degree trespass. Hovey maintained that the beach access had been deeded to the public years ago and the public was allowed free access. The Sand Dollar Shores Homeowners Association, Inc., disputed that claim and said it was all private property for use by homeowners only. A video of the arrest incident was shared on social media, drawing considerable attention.

After Hovey and his wife, Tanya, purchased a house across the highway from Sand Dollar Shores in 2002, they began renting it out on a weekly basis during the summer months, and started a beach equipment rental business to serve their residential renters and other vacationers, stated the court documents, which also said the Hoveys and their customers used the Sand Dollar Shores pedestrian walkway to get to the beach.

The Hoveys maintained that the plat map dedicating “all roads, alleys, walks, parks, and other sites to public or private use” made the easement open to the public and continued to use it.

A statement released by the Town of Duck shortly after the arrest explained that “The Town of Duck does not restrict an individual’s use of the public beach, but it does not own or maintain any beach access locations in the town. Because the accesses are privately owned and maintained, the Town cannot grant permission for their use and unauthorized use could be deemed trespass as it would with any other private property.”

In February 2020, the Hoveys prevailed in superior court with a ruling that Sand Dollar Shores beach accesses to the Atlantic Ocean had indeed been designated as open to public use.

The ruling was in line with others in North Carolina where courts have consistently ruled that beaches are public. However, by the time Duck was incorporated in 2002, all oceanfront property other than the U.S. Army Corps of Engineers Field Research Facility had already been platted as private property. Most beach accesses in Duck were located in subdivisions governed and maintained by homeowner associations.

The HOA appealed the Superior Court decision and, in an 18 page opinion, the Court of Appeals held that because a plat map fails to show an unambiguous intention to dedicate the walkway easement to public use, the trial court erred in granting summary judgment for the Hoveys.

The April 6 opinion says that although the plat map states an intention to dedicate “all roads, alleys, walks, parks, and other sites to public or private use as noted,” the document contains no note dedicating the easement as for public use.

It was noted also that while the public is entitled to walk on the beach, wade in the ocean and otherwise use the natural resources, there the boundaries of these properties, the land between the beach and public streets and highways belongs to private landowners and the court must uphold private property rights under the law. And, while the Hoveys are not barred from the beach, they could negotiate for access or, failing that, drive to nearby municipalities or any unincorporated areas in the county to the north and south that maintain public beach accesses, the document stated.

For various reasons stated, the Court of Appeals reversed the judgment of the trial court and remanded it back to the lower court with instructions to enter summary judgment for Sand Dollar Shores Homeowners Association, Inc.