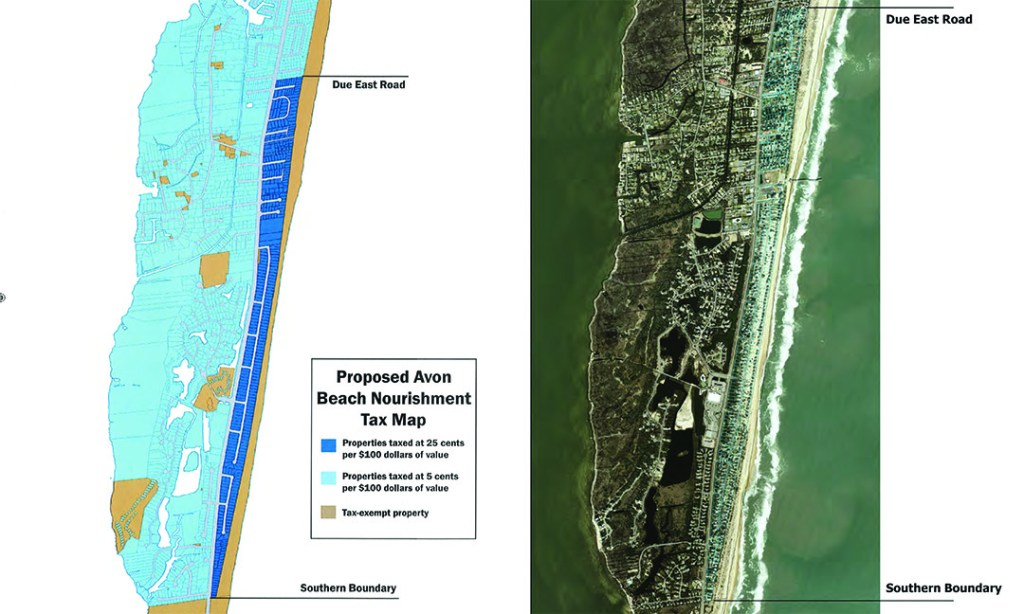 County manager Robert L. Outten read the findings, which apply to both service districts proposed to fund 30% of the project. The findings state:

– it is impossible or impracticable to provide these services on a countywide basis;

– it is economically feasible to provide the proposed beach erosion control and flood and hurricane protection works services in the district without an unreasonable or burdensome annual tax level;

– there is demonstrable demand for the proposed services by persons residing in the district.

District A runs from Due East southward to the end of Avon on the Oceanside. At the April 19 meeting, Outten explained that this district is expected to have a tax rate of 20 cents plus five cents applied to all of Avon for a total of 25 cents per $100 assessed value.

District B is all the rest of Avon, which may be taxed at five cents per $100 assessed value. The tax rates have not been set by the Board of Commissioners.

Outten said if a mailing to all property owners in Avon is mailed in a timely fashion, the required hearing will be held May 17. If not, the hearing will be shoved to June 7. A report about the proposed service district is required to be available four weeks before the public hearing. The notice of the public hearing must be mailed four weeks before the hearing.

An online petition, found at nonewpropertytaxes.org, went live Feb. 13. By Feb. 23, it had garnered 51 signatures. The petition, as of April 22, has 74 names opposing the tax increase for beach nourishment. Day reported the petition was emailed to Outten on Feb. 23. On March 17, the county, when asked by Day, reported 22 not in favor of the tax increase.

On Tuesday, April 20, Day received an email from Dorothy Hester, the county’s public information officer and the person who handles FOIA requests. She told Day she was in the process of collecting materials and would let him know when they were available for review.

The subject was the Avon Kinnakeet Mine, a 38-acre sand mine located a quarter mile from the eroded Avon beach. The email says the “mine appears to have sufficient sand to complete the Avon Renourishment project.” The email says permits are nearly in place to allow the sand to be used this year. Hollowell, who owns the mine, “believes this solution can also save Dare County and Avon residents as much as $3 million.”

Outten quickly said that he had responded multiple times to this solution. He said issues are how to get the sand to the beach and that the mine’s sand grain size is not compatible with the beach.