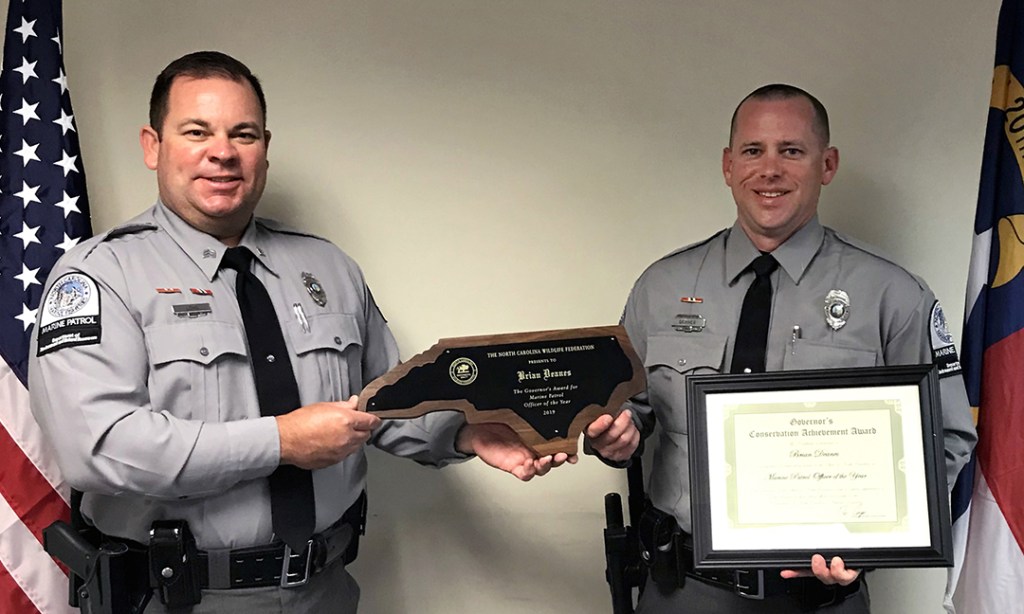 Brian Deanes is the Marine Patrol Officer of the Year for 2020, but when he first learned he was chosen, he was a little surprised.

“I thought it was great to even be considered for it,” Deanes said. “I never thought I’d actually get it.”

Being named as the North Carolina Wildlife Federations’ Governor’s Conservation Achievement Awards Marine Patrol Officer of the Year is quite an honor, since it means that the colleagues and supervisors who nominated him think he is doing a good job, Deanes said.

That is exactly why Retired Marine Patrol Captain Donovan Twyne nominated Deanes for the award prior to his retirement.

“Officer Deanes is an officer who enjoys the job, enjoys patrolling and getting out and getting his hands dirty!” Twyne wrote. “Through the years, he has made large amounts of cases for our agency and has done an exceedingly good job of it.”

Marine Patrol Sergeant Brian Long presented the award to Deanes on April 1 in a small ceremony at the Marine Patrol District 1 Office in Manteo. Typically, the Wildlife Federation presents the Governor’s Conservation Achievement Awards during a banquet held in September, but the 2020 banquet was not held due to COVID-19.

Marine Patrol District 1 runs from the Virginia state line to Ocracoke Inlet. It includes waters around Manteo, Swan Quarter, the Outer Banks and Ocracoke. It is where Deanes has distinguished himself in the 18 years since he became a Marine Patrol officer in May 2003.

Deanes began his career with Marine Patrol stationed in Dare County on the agency’s 48-foot patrol vessel Roanoke, then in 2005, he transferred to a patrol position in Pasquotank and Camden counties.

These waters support a large commercial blue crab fishery, and some of Deanes’ most noteworthy achievements were solving cases involving larceny of crab pots in which thousands of dollars worth of crab pots were recovered and the thieves were brought to justice and ordered to pay restitution to the victims. In one of the cases, Deanes worked with law enforcement in Virginia to recover crab pots that were stolen from North Carolina.

Deanes graduated from Hertford County High School in 1998 and received a Bachelor of Science degree from East Carolina University in December 2002. He also holds a Basic Law Enforcement Certification from Pitt Community College, an Advanced Law Enforcement Certificate through the North Carolina Criminal Justice Training and Standards Commission and a General Instructor Certificate. He is a certified ASP Baton Instructor and Field Training Officer and he frequently provides training to other officers.

He and his wife Michelle live with their two children in Camden County.