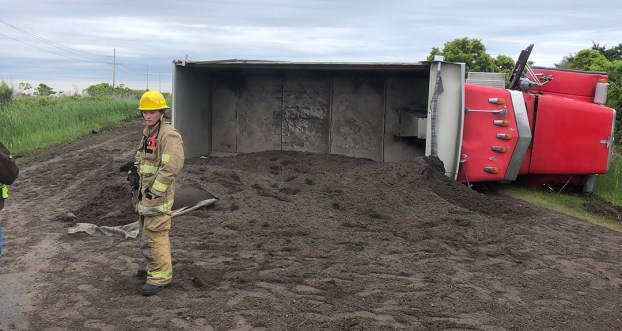 Mid-afternoon on Tuesday, May 11, 2021, Chicamacomico Banks volunteer firefighter Ben Abe stood at an overturned dump truck on NC 12 about one and a half miles north of the construction site for the Rodanthe bridge. Courtesy Chicamacomico Banks Volunteer Fire Department

At 2:15 p.m. on Tuesday, May 11, 2021, the Chicamacomico Banks Volunteer Fire Department was called out for a wreck on NC 12 about 1.5 miles north of the under-construction Rodanthe Bridge.

A dump truck filled with top soil and heading south on NC 12 dropped wheels off the pavement. The driver overcorrected and the truck tipped over. The truck ended up facing east, blocking both lanes of vehicular traffic. No one was injured.

To clear the mess, Phillip Edwards from Rodanthe used his Skidster to push enough dirt off the road for the wrecker from Seto’s Towing to work. To turn the dump truck upright, the wrecker’s big boom was used. The Seto’s wrecker, which arrived around 3 p.m., hauled the dump truck northward.

NCDOT sent a Croatan Contractors front end loader from Oregon Inlet to finish clearing the road so traffic could resume.

Backed-up traffic started slowly moving around 4 p.m. By 4:30 p.m., traffic northbound was creeping along, but then just stopped, as did traffic southbound. Traffic remained slow going southbound through Rodanthe.

Responding to the incident in addition to the volunteer firefighters were a crew from Dare County Emergency Medical Services, a Dare County Sheriff’s Office deputy and a trooper with the State Highway Patrol.