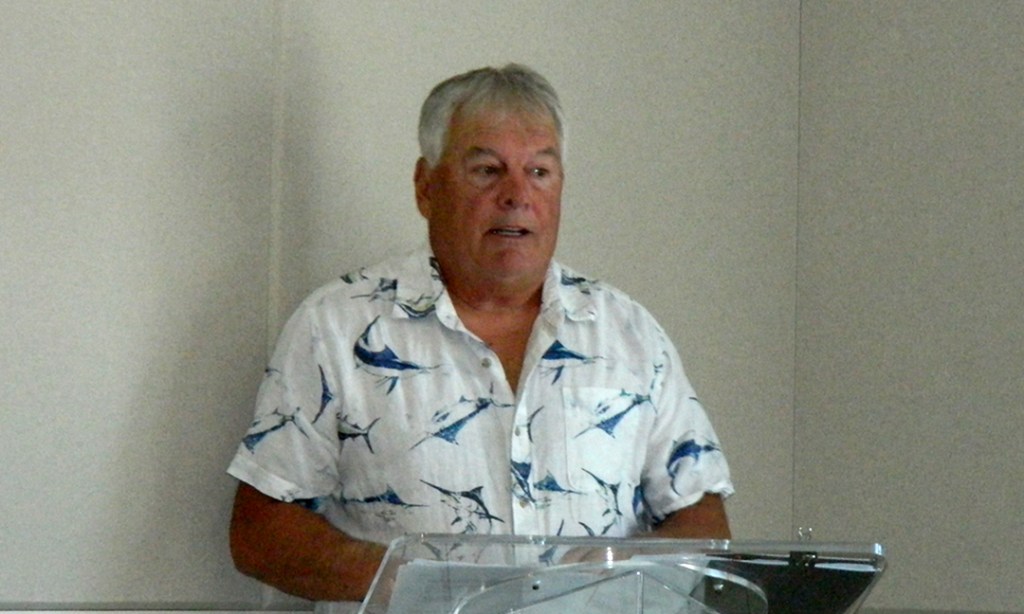 Scott Garber provided a detailed presentation on pickleball during the May 20 Dare County Tourism Board meeting in Manteo. Philip S. Ruckle Jr. photo

Business items covered during the May 20  Dare County Tourism Board included review of the current budget, approving a new budget, and a report on the popularity of pickleball.

Providing a look at current budget revenues and expenses, Finance Committee Chair Ervin Bateman said with March receipts for occupancy up 817.97 percent
and meals up 159.46 percent over 2020 the numbers, it looked like they were from Fantasy Island.

According to Bateman, those numbers translate to total to date revenue increases of 29.8 percent and 0.09 percent, respectively. In addition, the February retail sales tax collections at $4,749,304 were higher than any amounts reported in the previous five years.

During public comments local resident Scott Garber made a detailed presentation on pickleball. Providing a brief history of what he called the fastest growing sport, Garber said there are some 3.3 million participants in the U.S.

Incorporating several elements from badminton, tennis and ping pong, the hand-paddle sport was invented in the mid-1960s as a children’s backyard pastime. Using large solid paddles, players hit a plastic ball with holes similar to a Wiffle ball over a modified tennis net.

No longer a simple kid’s game, pickleball has evolved from a backyard family activity into a popular sport played internationally with its own set of official rules, rankings, promotional materials, and tournaments. The USA Pickleball Association, a nonprofit 501(c)(3) corporation, was organized to promote the growth and development of the sport.

Garber said providing a pickleball facility on the Outer Banks is a sure way to draw in more visitors. In support of that position, he said in April more than 2,000 registered players participated in a U.S. open tournament in Naples, Florida. Further, a recent Virginia tournament had 64 North Carolina residents, including seven from Dare County.

Garber went on to say that a solid partnership with local governments and the Tourism Bureau would have a solid economic impact for the Outer Banks as it does in other areas, adding that the addition of pickleball court facilities here would enable championship tournaments to be held which would boost tourism.

During a discussion after the presentation, Tourism Board executive director Lee Nettles advised that pickleball is already included as one of the uses being discussed as part of an event center being considered at the Soundside Event Site in Nags head.

After a very brief public hearing on a proposed $13,241,270 fiscal year 2021-22 budget, the board approved the financial document with a roll call vote.

In other business for the day, the board approved minutes from the April 15 meeting and authorized an $18,500 contract with Coastal Engineering and Surveying Inc. for renovations to the Outer Banks Visitors Bureau offices.

Nettles advised that much of the work will be in the marketing area where several employees are located and was needed before COVID restrictions limited area activities. Plans call for Coastal Engineering to oversee detailed engineering and construction by a licensed general contractor for a new work area layout with two additional office spaces, a new computer server location and a larger storage and printer room with the potential use as a small meeting area.

With board approval, the contract will now go to the Dare County Board of Commissioners for its approval.

Nettles also reported that a contract is under review for the Tourism Board to buy all Nags Head ownership interest in the Soundside Event Site. The $2.33 million transaction includes a $600,000 payment this year with the remainder paid out over a 10 year period. W. Jay Wheless, legal counsel for the board, explained that each payment is a purchase in ownership interest and that money is not being borrowed nor is the transaction being financed.

At the end of business, board members agreed to schedule the next meeting for 9 a.m. on Thursday, June 17 in the Curtis H. Creech Memorial Boardroom at the Outer Banks Welcome Center Building in Manteo.