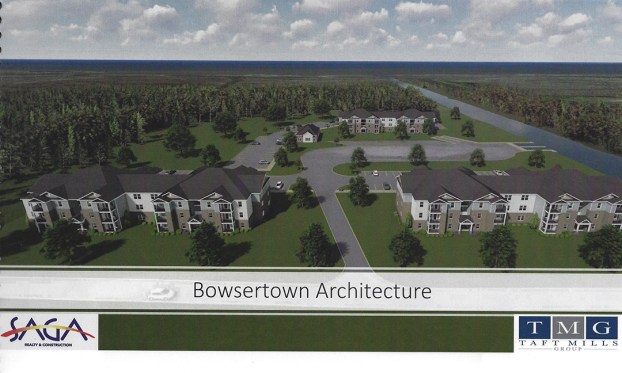 A proposal has been submitted for a housing development on Dare’s Bowsertown property. Image from proposal submitted to Dare County

On Tuesday, June 1, Dare County Board of Commissioners will meet to discuss housing alternatives.

Essential housing for full-time residents has long been on the board’s agenda.

The proposal, submitted by SAGA Realty and Construction and the Taft Mills Group, asks for a $4.5 million loan from Dare County, reduction of water connection and impact fees and a “payment in lieu of taxes” of $200 per unit per year, increasing 2% per year. The proposal is open until June 7.

The proposal was discussed at the commissioners May 3 budget workshop. Another party was interested in submitting a proposal.

At that time, distributing a Request for Proposals was considered. 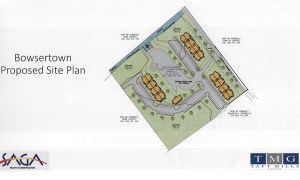 At the board’s mid-May meeting, Dave Hallac, superintendent of National Parks in Eastern North Carolina, presented a 2020 report and outlined work for the next three years.

The commissioners have scheduled a public hearing for 5 p.m. on June 21 regarding updates to Dare County’s Code of Ordinances required by legislation passed by the state’s General Assembly and other changes suggested by a review of the ordinances.

Dare County’s Planning Board has reviewed the changes and recommends approval.

The various revisions are available for review at darenc.com under Board of Commissioners and the agenda for May 17, 2021.

The second action requests through the Water Resources Reform and Development Act of 2014, Section 7001, to add the Hatteras Inlet Bar as a part of the Rollinson and Hatteras Federal Authorization.

County Manager Robert L. Outten asked and the commissioners agreed to a one-year contract instead of a five-year contract with Sandski, LLC to provide lifeguard services at the “Ole Swimming Hole” located on Roanoke Island. Contract is between hours of 10:30 a.m. and 6 p.m. seven days a week beginning Saturday, May 29, 2021 through and including Monday September 1, 2025.

Outten is also asking the contractor to keep a record of the daily use of the facility. The beach profile drops off quickly. Outten said the site is now used infrequently. He said there are probably other areas that could benefit from lifeguard service, such as the Rodanthe Beach Access.

Outten presented a list of one-time items to be paid for in the current fiscal year. The list was reviewed at the May 3 budget workshop. The budget amendment uses $5.11 million of the $6.16 million available in the unassigned fund balance. The major expenditure is $2.48 million to fund the Law Enforcement Officers’ Special Separation Allowance. The move eliminates the related liability.

On May 17, the commissioners made the following appointments:

– Reappointed Kaye White and Susanne Kelly to the Senior Tar Heel Legislature for a two-year term.

– Reappointed David Reide Corbett to College of The Albemarle Board of Trustees.

Little Free Libraries are a global phenomenon. The small, front-yard book exchanges number more than 100,000 around the world in... read more