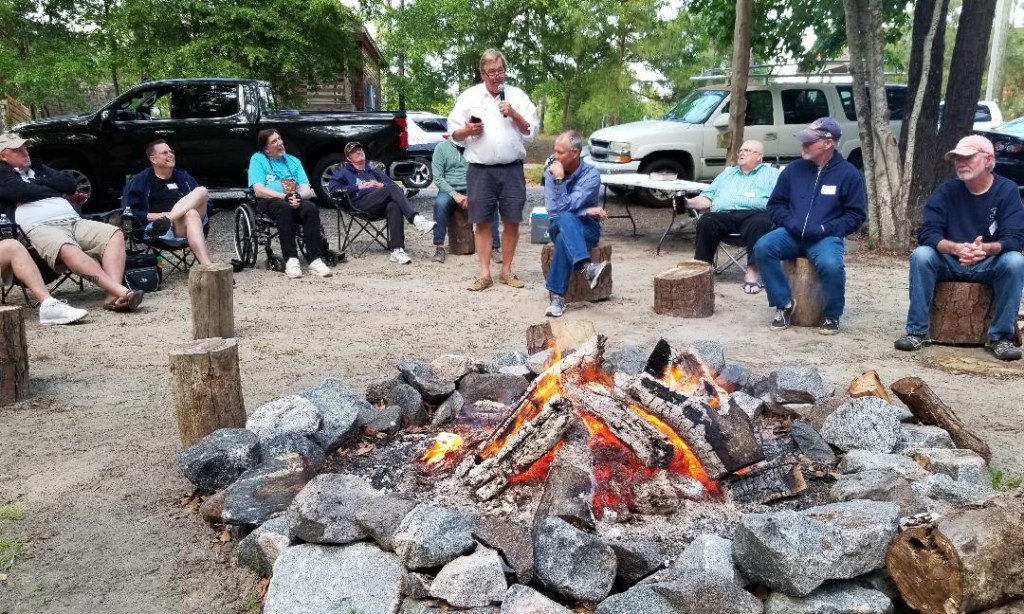 Participants in the Outer Banks Christian Men’s Fellowship Dinner gathered around the campfire after their meal together. Art Toalston photo

Around a campfire, more than 50 men ended a 15-month COVID-19 hiatus, resuming their Outer Banks gatherings to talk about their faith and to pray for those weathering illness, hardship and heartbreak in their lives or their families.

“It’s what we’re starving for,” said Rick, who was identified, like all the others, by a nametag that kindled a freedom to speak as good friends.

“We’ve been hungry for fellowship with one another,” said Rick, a member of Moyock United Methodist Church who worked in the Norfolk Naval Station’s engineering department for 35 years. He has attended the monthly Outer Banks Christian Men’s Fellowship Dinner for nearly 10 years of its 24-year history.

“The cool thing is, there is no script,” said Dave Stormont, a homebuilder who maintains an email list of 250 to relay when and where the next meeting will be held.

“It’s all about what the Lord wants,” said Stormont, a member of Liberty Christian Fellowship in Kill Devil Hills.

Planning for each session is handled by Stormont and others by phone, text and email – checking who has offered their facilities and who can provide the meal.

The group has met at office buildings, fire stations, warehouses, athletic fields – and churches – from Moyock and Corolla south to Buxton and west to Elizabeth City. Attendance has ranged from a dozen to more than 100.

The gathering on Monday, May 17 was held at Liberty’s Camp Emmanuel, beginning with hot dogs, beans, cole slaw, potato salad and banana pudding served in the pavilion, then taking seats around the fire pit in the amphitheater. 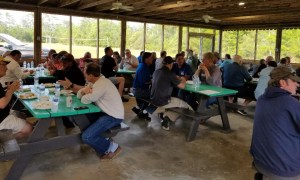 Hot dogs and side dishes were served to 50-plus men who resumed the 24-year monthly Outer Banks Christian Men’s Fellowship Dinner for the first time since the COVID-19 pandemic. Art Toalston photo

Larris, a retired commercial fisherman and charter boat captain, was honored for driving the farthest – 90 miles from Jamesville, west of Plymouth.

“Being here is all the prize I need,” said Larris, a member of Jamesville and Siloam United Methodist churches.

The last gathering before the COVID-19 shutdown was held in February 2020 at the Dare County Administration Building in Manteo, with about 65 men in attendance.

The two hours at the campfire May 17 began with the sound of a shofar, a ram’s horn used by the ancient Israelites, lifted skyward by Marty, a Realtor and member of Coastal Family Church in Nags Head, followed by such songs as “What a Friend We Have in Jesus,” “Amazing Grace” and “I Saw the Light.”

Various men addressed the group, some soft-spoken, others in exhortations akin to a football coach or preacher.

Ian, a member of Church of the Outer Banks in Manteo, spoke of the traumatic brain injury he sustained in falling nearly 20 feet from a ladder two years ago at a job checking for window leaks and not remembering anything from a month in the hospital.

Through 100-plus doctor visits and rehab sessions in learning to walk again, Ian said, “The Lord Jesus is slowly putting me back together. I’m not what I once was. I’m who he is making me now . . . Lord Jesus, I’m not going to let go of you. He’s all we’ve got . . . And that is more than enough.”

David, a wheelchair-bound Navy retiree and member of Liberty Christian Fellowship, told of unexpectedly falling to the floor at a dinner for first-responders last June, necessitating visits to seven specialists for the diagnosis of a condition attacking the nerves in his body.

Even so, David said of his faith, “It’s my attitude that’s making a difference in people’s lives.”

In times of prayer, the group gathered around several men, interceding for one whose troubled college-age son had blamed him for being born, yet subsequently gave him a hug, and another whose daughter needs a kidney transplant and son is struggling with a Xanax addiction.

The evening ended with communion – grape juice in small paper cups and small chunks of bread.

The initial gathering in 1998, Stormont recounted, was initiated by several coworkers who “enjoyed each other’s company” but felt spiritually separated on Sundays. Thirty-five men from seven different faith expressions attended a midweek spaghetti dinner at a construction office in Kitty Hawk. “The Holy Spirit showed up that first night,” he said. “The power of God fell on that place.”

Matt, a second-time attendee and fellow Liberty member, said his initial experience with the group, before COVID-19, was “a life-saver. It gave me a sense of community . . . seeing how fertile the ground is here on the Outer Banks.”

To be added to Stormont’s list for the Outer Banks Christian Men’s Fellowship Dinner, email dave@stormcoasthomes.com.

Art Toalston is a writer based in Nashville, Tenn.