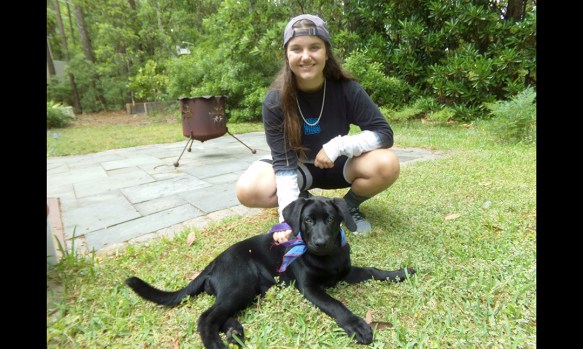 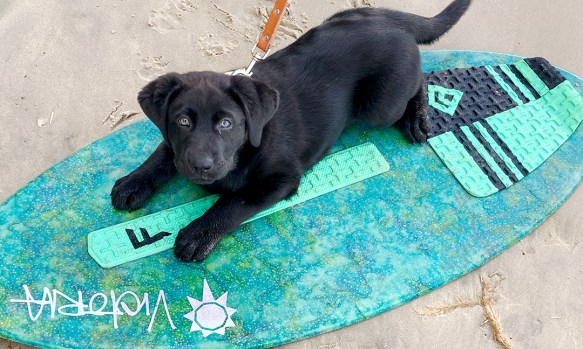 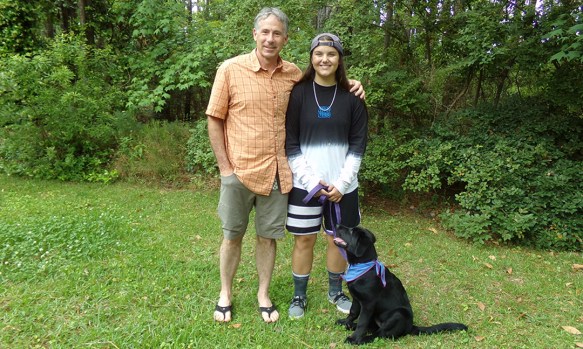 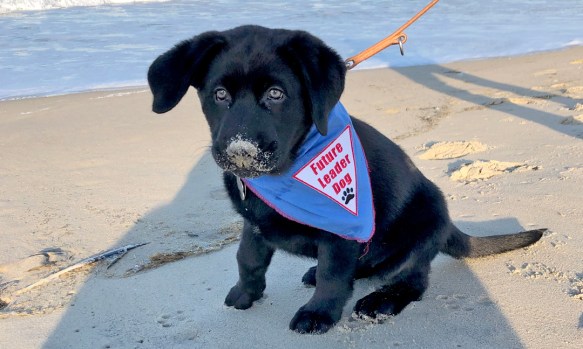 Manteo High School junior Elle Vandzura is earning her community service credit in a unique way – by raising a puppy to be a future guide dog.

In April, when many students were enjoying a week of spring break, Vandzura traveled with her father to Leader Dogs headquarters in Rochester Hills, Michigan to pick up nine-week-old Scout, a black Labrador/German shepherd mix puppy.

For the next 12-14 months, Vandzura, her parents and her brother Hart are tasked with the job of socializing Scout and exposing her to a variety of experiences to prepare her to be a leader dog for the blind. They take her places like Lowe’s, Food-A-Rama, Oretega’z Southwestern Grill, the beach, even church. “She does amazingly well at church,” Elle’s father Boone Vandzura said. He is the chief ranger with Cape Hatteras National Seashore.

When she’s out in public, Scout wears a harness or a bandana that says, “Do not pet I’m working” to discourage understandable petting of an adorable puppy. Seeing eye dog etiquette says that you do not pet a dog while he or she is working because it can distract the dog from noticing hazards. Scout, who loves new people like any four-month-old puppy, is being trained to wait until a new person asks for permission to pet her. The person will stand upright (not reach for the dog) until Scout sits – which is her way of asking to be petted – and then the attention can begin!

Each week, Elle participates in Zoom meetings that teach her about Scout’s development and how to conduct training. Leader Dogs also offers a coach who is available by phone or email any time of day to help with any issues Scout is having. Elle and her family serve as volunteers and all of Scout’s food and medical care are their responsibility, though Roanoke Island Animal Clinic has discounted Scout’s care.

The Vandzuras are constantly training Scout with the mindset of her future role as a leader dog. They must use a set of commands set by Leader Dogs and use specific chew toys to ease Scout’s transition to her future owners. For example, the command for urinating/defecating is “park” – how many phrases do typical dog owners use to say the same thing? One of the most important skills Scout can learn is how to “settle” or sit quietly near her owners. Leader Dogs selects breeds of dogs who are naturally calm, a good size and healthy. Most of their dogs are golden retrievers, Labradors and German shepherds.

Places with loud noises like baseball games, skateparks and concerts are important to visit so Scout can become familiar with new sounds, with the comfort and security of her caretakers. “We don’t want her to be startled. It’s important to know when your dog is scared so you can offer reassurance,” Boone said.

As important as it is to expose Scout to new experiences, the Vandzuras also must be conscious not to form habits or expectations in Scout that she might not have with future owners. “We play frisbee with her but it’s important that we don’t play frisbee with her every day so she doesn’t come to expect it,” said Boone. Even seemingly innocent things like letting Scout jump onto the couch or letting her playfully gnaw on fingers need to be considered for their future implications. “It’s cute now but is it cute when she’s 70 pounds?” Elle said.

COVID-19 has actually opened up more possibilities for people to serve as “puppy raisers.” Previously, all training was conducted on site in Rochester Hills, so trainers needed to live near Leader Dogs headquarters and attend weekly training in person. Since all training is now on Zoom or prerecorded videos, families like the Vandzuras can now participate in the puppy raiser program. This benefits vision impaired individuals, too, because it means Leader Dogs can better match a dog’s experiences with its final owner, for example, for someone who lives near the ocean or in the mountains or in a busy city.

Scout’s training with the Vandzuras is just one step of her journey. Next summer she will return to Michigan and begin extensive training to be a leader dog. When her training is complete, she will be placed with a visually impaired person.

For Elle, it’s difficult to love a dog knowing that the day is coming when she must return her to Leader Dogs. “But it makes me feel good because I’m helping other people. They need her more than I do,” she said.

Her father agreed. When he was growing up, he participated as a puppy raiser with three different dogs and desired the same experiences for his children. His eyes brimmed with tears as he looked at his daughter with Scout settled contentedly underneath her chair. “Just knowing what we’re doing…” he trailed off. “We’re going to be sad.”

But it’s a worthwhile sacrifice for the Vandzura family, for the long-term goal of providing a dog for someone in need, and also for the opportunity to raise a puppy. They love Scout for the same reasons all pet owners love their dogs: “When you come home and she’s exited to see you, and wants to be next to you.” Even though she’s training for a very important job, “she’s not a robot,” Elle said. “She’s very energetic and loving.”