The initial call came in around 4 a.m. to a rental house in the 2000 block of South Virginia Dare Trail. Dare County tax records show the structure has 18 bedrooms. Occupants of that property and surrounding properties were evacuated and no injuries have been reported.

Fire spread to the adjacent TownePlace Suites pool house to the north of the rental property and damage was also reported to some of the Miller’s cottages, which are adjacent to the south. Multiple vehicles were reported to have been damaged or destroyed by the fire. 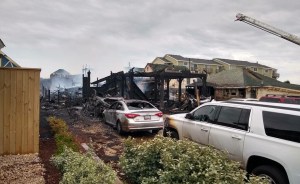 Responding to the scene were fire crews from Kill Devil Hills, Nags Head, Roanoke Island, Colington, Kitty Hawk, Southern Shores as well as Dare EMS and Kill Devil Hills and Nags Head police departments. Dominion Power and Piedmont Gas were also on scene to assist with their respective utilities. An excavator from Hatchell’s Concrete, Inc. cleared debris so the rest of the hot spots could be extinguished. Pop-A-Lock assisted with accessing vehicles to make room for the excavator and Seto’s was also on scene moving vehicles.

Affected occupants are being assisted by the American Red Cross – 42 people from the primary structure and eight from a neighboring structure, according to Rachel Tackett, public information officer with the Town of Kill Devil Hills. 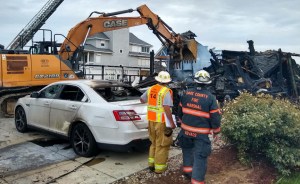 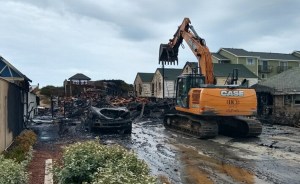