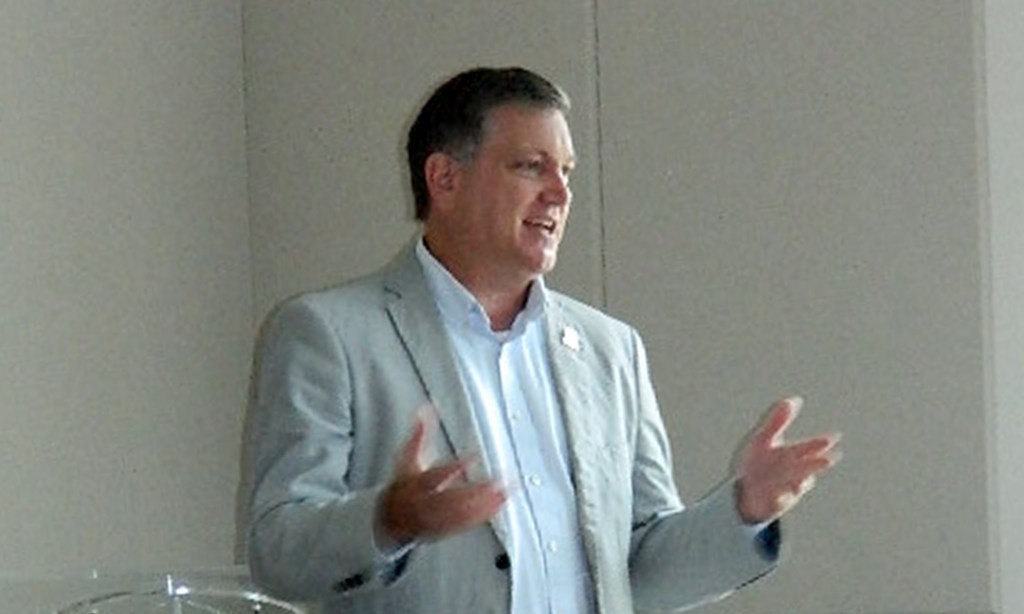 College of The Albemarle President Dr. Jack Bagwell spoke at the June 17 Dare County Tourism Board meeting about current COA activities and some of the school's future plans. Philip S. Ruckle Jr. photo

Following a lengthy June 17 discussion on auditing procedures, the Dare County Tourism Board voted at its regular monthly meeting to continue using Johnson, Mizelle, Straub and Murphy as its auditing firm.

Executive director Lee Nettles opened the conversation, saying it is always a good operational policy to put services out to bid and that two responses came in for audit services.

Nettles explained that the books are reviewed every year and that Johnson, Mizelle, Straub and Murphy has been the audit company for several years and director of administration staff member Diane Bognich confirmed that it has been for about 12 years.

Both companies were said to have excellent credentials.

Although the Budget and Finance Committee recommended going with Thompson, Price, Scott, Adams and Co. for the audit, several board members said they felt the switch might not be worth the money saved.

While Thompson did have the lower bid, after an initial on site interview, everything else would be done off site by video, fax or email. Johnson sets up in the conference room and performs its audit work at the Tourism office in Manteo.

During the discussion, Bognich was asked how she felt about the switch.

After an initial response that she was comfortable with the switch, adding that she has lived in a virtual world for a year, she later said she had mixed feelings after it was pointed out that much of the $4,000 difference would be in work and time providing paperwork and reports to Thompson and it will fall on her.

Ervin Bateman said although he voted in favor of having the board review the bids, he is not in favor of making a change because eye-to-eye contact is irreplaceable.

Webb Fuller pointed out that much like the attorney contract, the board can look at the cost, but it is the service provided that is the main factor.

Tim Cafferty added that it appears most of the companies Thompson has dealt with were much smaller and handle only a fraction of the volume Dare County deals with.

While there was interest in having a different company review the books, a comment from Bambos Charalambous that the Dare County Tourism Board should keep its money in the county led to a unanimous board vote to stay with Johnson, Mizelle, Straub and Murphy as its auditing firm.

Other business for the day included a review of Town of Manteo plans to develop a downtown Manteo waterfront lot between the Waterfront Shops condos and Poor Richard’s Restaurant.

Known as the Davis Lot, the property was purchased by the Town of Manteo with financial assistance from the Dare County Tourism Board and the Friends of the Elizabeth II and provides a clear view of the Elizabeth II sailing vessel docked on the other side of the bay.

Deed restrictions prohibit certain activities on the site in order to maintain a view of the Elizabeth II. Since no additional funding is being requested, the Town of Manteo was simply seeking confirmation of Dare County Tourism Board’s support of plans to provide some site improvements like seating, landscaping, interpretive signage and solar-powered lights.

Board attorney W. Jay Wheless pointed out that while an argument could be made that some of the planned improvements could in some way hinder views of the Elizabeth II, overall they also enhance the view from the site.

After providing a vote of approval for the plans as presented, it was also agreed that the board should look at how involved it needs to be in any grants involving property purchases.

Also of interest was a presentation by College of The Albemarle President Dr. Jack Bagwell and Timothy Sweeney, dean at the COA Dare County Campus, on current events at the college.

Bagwell pointed out that COA, one of 58 community colleges in the North Carolina Community College System, is the state’s oldest community college and serves seven counties. The school has an annual enrollment of more than 3,350 COA students and offers more than 40 certificate and diploma programs at four locations: Currituck, Edenton, Elizabeth City and Manteo.

According to Bagwell, the $1.3 million upgrade to the Manteo campus which is currently under construction will feature the latest and greatest capabilities. The new 36,000 square feet building is designed to host conferences and other events that will draw people there.

Bagwell said the Currituck campus is also expanding and should be ready in the next couple of days.

During a short question and answer session, Bateman asked when the school will provide a culinary program because the 300 restaurants in the area make this a perfect training ground. Sweeney said there have been talks about such a program tied to First Flight High School, but offered no timeline.

There was also some discussion about other hospitality programs offered and the need for apprentice training programs in light of Governor Cooper’s recent $140 billion commitment to offshore wind power. Bagwell said that also has been in the works for about a year and a half and the school is looking at curriculum and other schools to partner with.

During a budget report, Bateman advised that there are positive numbers reported for all areas adding that it has been “one tremendous year and we are blessed.”

The next Dare County Tourism Board meeting is set for 9 a.m. on July 15 at the Outer Banks Visitors Bureau Administrative Offices in Manteo.

North Carolina ranks near bottom of states in COVID-19 vaccinations