Business owners and friends of Andy Twiddy and Cassandra Redd, and applicant Michael Smith, who want to open Banshee Tattoo, spoke to commissioners about the level of professionalism and artistic talent the tattoo artists possess. Said Twiddy of Manns Harbor, one of the three owners, “We aren’t going to be your basic street shop – it’s not going to attract a rowdy crowd, we plan to keep bankers’ hours, it’ll be by appointment only. I think this’ll be a good fit for KDH. I’ve worked in KDH for a long time.”

Manteo resident Tracy Porter said: “I’ve known Cassandra for several years. She is what I consider a true artist. And what her and her coworkers do is truly a gift. A lot of people look at tattoos is other ways but actually it is an art form and it’s an artform a lot of us choose to wear on our bodies. I think she’s utmost professional, you can go see. I fully support her and several others here tonight.”

Bill Gillen of Collington said, “I know historically tattoos may have been viewed as bringing the wrong crowd or something. But as a wearer of [Redd’s] art, it belongs on Gallery Row just as easily as anywhere else in the county – it truly is an artform. I think it will draw a lot of tourists, she does a lot of beautiful seascapes and beautiful lighthouses and such and it’ll be an asset to the town in my opinion.”

While board member Ivy Ingram expressed approval for tattoos in general, she shared concern about changing the ordinance to allow tattoo parlors in commercial zones. “This is a great artistic community – it’s not about a specific shop . . . I do have concerns about this use in our commercial zone as it doesn’t seem compatible with our current commercial uses. It could be more compatible in our light industrial 1 where we allow body piercings. That seems more consistent.”

Commissioners Terry Gray supports and BJ McAvoy agreed. “It’s a delicate balance. We are concerned with what could open up here, it’s not just your business we’re considering here,” McAvoy said to the supporters in the audience.

Ingram made a motion to deny the request but directed staff to look into allowing tattoo shops in light industrial 1 zone. Mayor Ben Sproul was the one dissenting vote: “When I look at tattoos and how they’re seen in the public, I think that’s evolved a great deal. Their art is valued higher and higher over time. I think it’s quite respectable. Going forward, I think that’s the future.”

Motion to deny the request passed 4-1.

Next, commissioners heard reports from College of The Albemarle President Dr. Jack Bagwell and from Dave Hallac of the Outer Banks Group on the National Park Service.

Bagwell gave an update on the 36,000 square foot, $18 million building project under construction in Manteo. “It will be the central hub for cultural, instructional, education, maybe tourism activities,” he said.

The mayor said, “It’s really exciting time, that new building is really going to change the look and feel of Manteo.”

Next, Hallac shared the state of the National Park Service in the area, which includes the Wright Brothers National Memorial, Fort Raleigh National Historic Site and Cape Hatteras National Seashore. 2020 saw record number of visitors and overnight campers: “People flocked, not just to their national parks, but here.” And, according to Hallac, we can expect more of the same for 2021. He shared plans for the future, including studies on the sea level rise, the much-anticipated multi-use path to connect the Wright Memorial to Colington and a large lighthouse restoration plan. He also presented awards of appreciation to Steve Albright, public services director and to the commissioners in appreciation of their partnership and stewardship to the Wright Brothers National Monument. 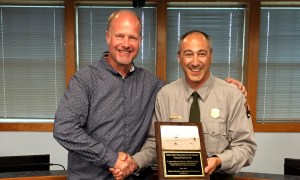 In old business, commissioners approved town code amendments mandated by the NC state assembly regarding local planning and development regulations. The changes will affect language in chapters 10, 30 and 31 dealing with general provisions, Board of Commissioners and boards and committees, respectively.

The one item of new business was the proposal for a weekly market at Aviation Park. “First Flight Market,” as it will be called, will run every Tuesday from 10 a.m. to 2 p.m. from July 20-August 17. It is limited to five weeks because the market will rely on school parking for overflow and teachers will be returning to school toward the end of August. Applications will accepted on a first come, first serve basis, but the goal is to offer diversified, local goods including produce, handmade local art, jewelry, candles and homemade food and baked goods. Vendor fees are only $50 for the five weeks ($10 per week) for a 10×10 table. There will be a maximum of 25 vendors and three food trucks. If the market is successful, the town will look into the possibility of a holiday market and a full season for 2022. “We’ve moved away from the commercialization of the market. [Shoppers] want the unique gifts something that’s made here, that’s the attraction,” said planning director Meredith Guns.

Commissioners also affirmed a 3.6% cost of living adjustment for town employees. It was originally budgeted for 2.6%. “It’s a very unusual time and we want to be supportive of staff and how challenging it can be to live here . . .” said Mayor Sproul. The additional one percent will cost the town $92,303 to the General Fund and $11,305 to the Water Fund. The vote for the amended budget was set for the June 23 meeting.