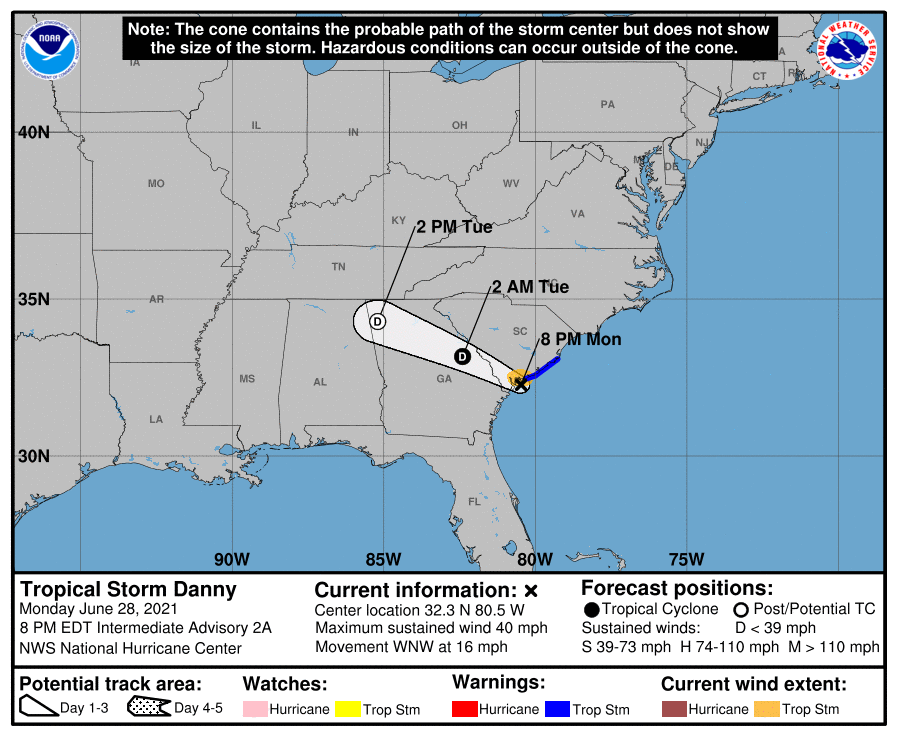 Tropical Storm Danny made landfall Monday evening on South Carolina’s coast, threatening to dump several inches of rain on parts of the southeast as it blusters inland.

Only hours after forming offshore, Danny had top sustained winds of 40 mph (65 kph) as it moved ashore just north of Hilton Head on Pritchards Island, the U.S. National Hurricane Center said. It added that Danny was expected to rapidly weaken over land as it heads into the southeast on a track through parts of Georgia.

The fourth named storm of this Atlantic hurricane season formed close to South Carolina’s coast during the afternoon Monday. Forecasters said it could be a rainmaker as far inland as the north Georgia Piedmont area and in northeast Alabama.

Dangerous surf conditions also were expected along parts of the southeast seacoast, along with a threat of isolated tornadoes near the coast. 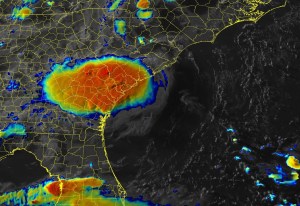 At 8 p.m., the storm was centered about 50 miles (80 kilometers) southwest of Charleston, South Carolina, according to the Miami-based hurricane center said. The system was moving to the west-northwest at 16 mph (26 kph).

A tropical storm warning was posted earlier Monday from Edisto Beach to South Santee River in South Carolina. The hurricane center said tropical storm conditions were expected to continue in the warning area for a few more hours after landfall.

The storm could produce between 1 and 3 inches (3 to 8 centimeters) of rain with higher amounts in some coastal areas of Georgia and South Carolina. Forecasters said heavier rainfall could occur in some scattered spots but the region has been dry, limiting the potential threat of any widespread flooding.

Still, forecasters warned that some local flooding remained a possibility in urban areas along the coast and up to 1 to 2 inches of rain were possible elsewhere around South Carolina and in north Georgia and northeast Alabama.

Some brushed off the storm’s potential impact.

In Savannah, Georgia, all systems were go for Tuesday night’s Savannah Bananas home baseball game as organizers eyed the storm. Officials for the collegiate summer league team planned to cover the field with tarp on Monday in preparation for the game.

“For us, being on the coast and being in Savannah, we get some nasty pop-up storms that can dump an inch of rain in just a few hours,” Bananas President Jared Orton said Monday. “This one doesn’t look like much more than just a nice, passing day of rain. I think we’re good to go as long as the sun comes out tomorrow.”