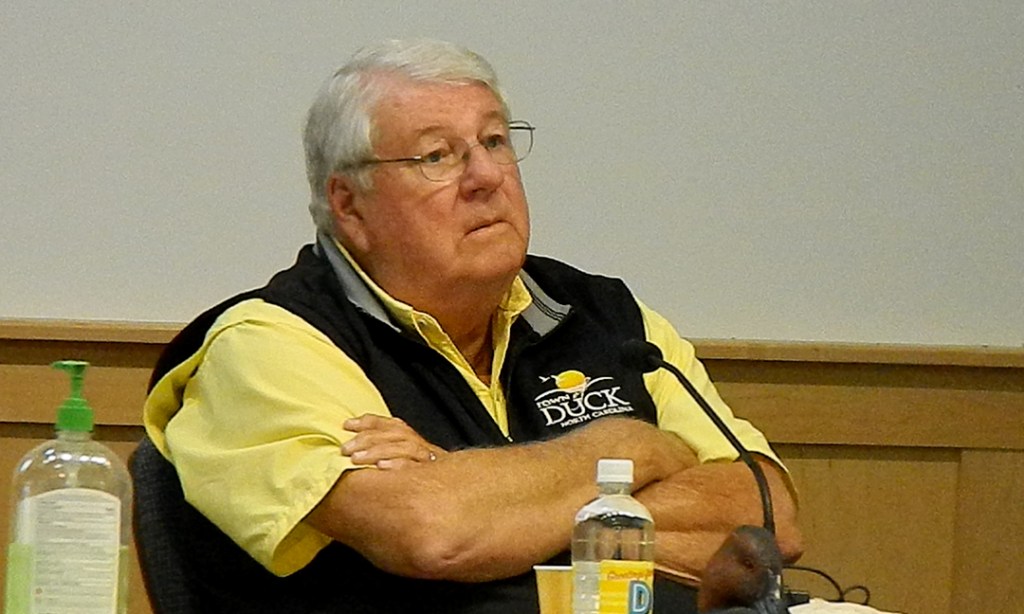 Leading off the afternoon session, Ken Willson with Coastal Protection Engineering provided Town Council with recent beach survey statistical data and participated in a discussion on a potential for additional sand being placed on the beach during an upcoming project and the costs/benefits of such a placement.

According to Willson, analysis of the data leads to three levels of sand placement ranging between 428,000 and 785,000 cubic yards with price tags of $7.9 million to $13.6 million. With about 196,000 c/y lost each year, the plan with the most sand would replace everything and the lowest volume plan would be more of maintaining a status quo option.

During Willson’s presentation, through a video link, Council heard from Brian Ley and Dr. Grace Andrews of Project Vesta about their efforts mixing volcanic olivine with regular sand to capture atmospheric carbon as a way to help speed up the reduction of carbon levels. According to its website, Project Vesta is a non-profit founded in 2019 and headquartered in San Francisco promoting accelerated weathering of volcanic olivine as a climate draw-down strategy in order to capture carbon absorbed in the world’s oceans.

During her comments, Andrews explained that by mixing set quantities of olivine with regular sand being pumped onto the beach, the chemical weathering process can reduce the carbon levels which are driving climate change.

Ley added that Project Vesta currently has contact with partners who are willing to finance the use of olivine, making it available at no cost to Duck. He added, however, that the use of olivine would most likely be part of a future project since it will not fit within the timeline of the current project.

Following the Project Vesta presentation, Willson said that there have been many snake oil salesmen with pitches that sound too good to be true, but he has yet to see a downside to this proposal. He went on to add that the process is still in a trial and study phase with projects in the Caribbean and northeast U.S.

When Ley pressed for a commitment, Mayor Don Kingston commented that it does sound interesting but Council would need to discuss it further before making any commitment.

At the end of re-nourishment discussion, although Rob Mooney favored using more sand, the majority of Council members said they preferred option three, with 428,000 c/y of sand for $7.9 million. Nancy Caviness explained that she favored that option since the lower cost allows Duck to set aside money for future beach work.

“With the information today,” said Caviness, “I’m more in favor of option three. It allows us to build a fund that puts us in a better financial position.”

Kingston added also that with the lower volume option is a lower cost, which lessens the burden on taxpayers. He also noted that there are now seven beach projects in the county.

Taking a look at the 2021-22 fiscal year $13,932,625 budget and $1,476,489 Beach Nourishment Capital Reserve Fund, town manager Drew Havens pointed out that the numbers are a little higher than normal due to debt service and some additional personnel expenses.

During Council comments, Sandy Whitman said he saw the $2.4 million BRIC grant and $1.4 million beach nourishment as two numbers that are pass-through amounts which puts the budget closer to $10 million.

A vote to approve as presented was unanimous and the full budget document and Capital Improvement Plan is available on the Duck website at: https://www.townofduck.com/wp-content/uploads/FY-2021-22-Budget-Document-Approved-WEB2.pdf

Havens then led off a lengthy discussion that led to the adoption of new Town of Duck personnel policies.

According to Havens, an earlier review of personnel policies led to a complete rewrite of the policy manual with significant changes in its language in order to be compliant with current law and following best practices.

Prior to accepting the new policies, Council asked Havens to make additional changes to sections dealing with acts of harassment, tuition assistance and retiree health insurance. Those sections were pulled for further refinement and will be considered separately once the new wording can be reviewed. Several benefit schedules are also slated to be recalculated for clarity.

After setting a timeline for Havens’ performance evaluation, Council approved budget amendments that moved $410,000 in general sales tax revenues into the beach fund, made a $7,000 funding adjustment for a firefighter/EMT position and authorized $73,000 year-end “clean up” transfers for unforeseen IT expenses, insurance deductibles and several unplanned interim town manager salary and retirement expenditures to ensure that departments do not exceed their total budgeted amounts.

The next scheduled Duck Town Council meeting is set for 6 p.m. on Wednesday, July 7.