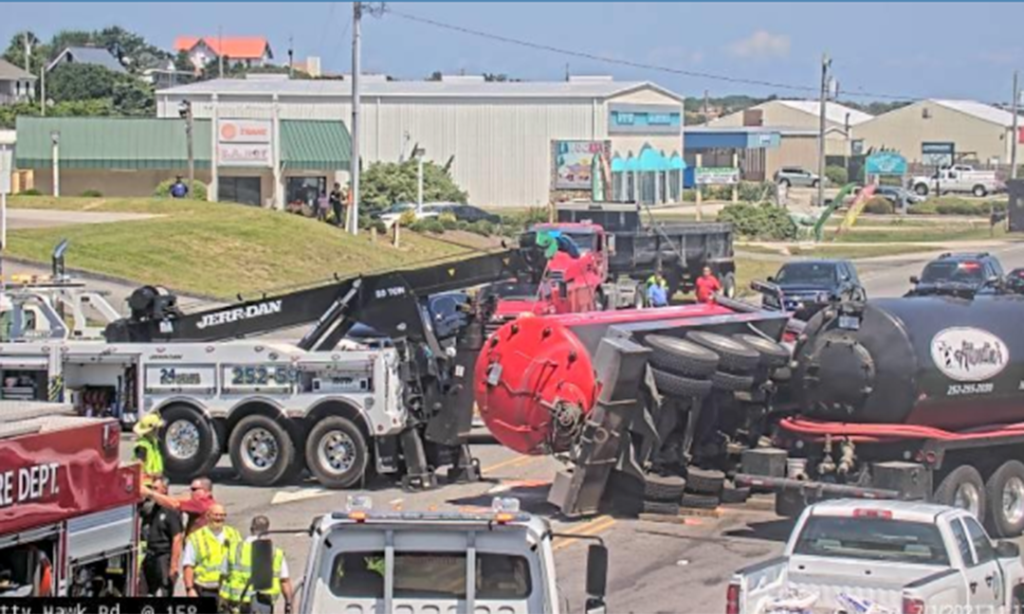 “Preliminary findings of the investigation point to a cargo hauling vehicle traveling north that went into the right turn lane to avoid several vehicles in both lanes in front of it. The vehicle then swerved and entered the intersection at a high rate of speed after running a red light,” stated a KHPD release.

“The vehicle struck a passenger car traveling west from the Kitty Hawk Post Office and then subsequently overturned and slid into the southbound traffic lanes. At this point the vehicle struck six more vehicles including another commercial motor vehicle that were stopped for the red light,” the release continued.

The North Carolina State Highway Patrol Motor Carrier Unit was called in to assist in the investigation due to commercial vehicles being involved.

According to KHPD, four motorists were taken by Dare County EMS to the Outer Banks Hospital and one motorist was flown to Sentara Norfolk by Dare Med Flight.

“The investigation continues and charges will be forthcoming,” stated the Thursday release. “Impairment does not appear to be a factor in the investigation.”

KHPD expressed thanks to “all the agencies that assisted at the wreck scene. We would also like to thank Seto’s and Bayside Towing for their quick response and assistance in getting the road clear.”