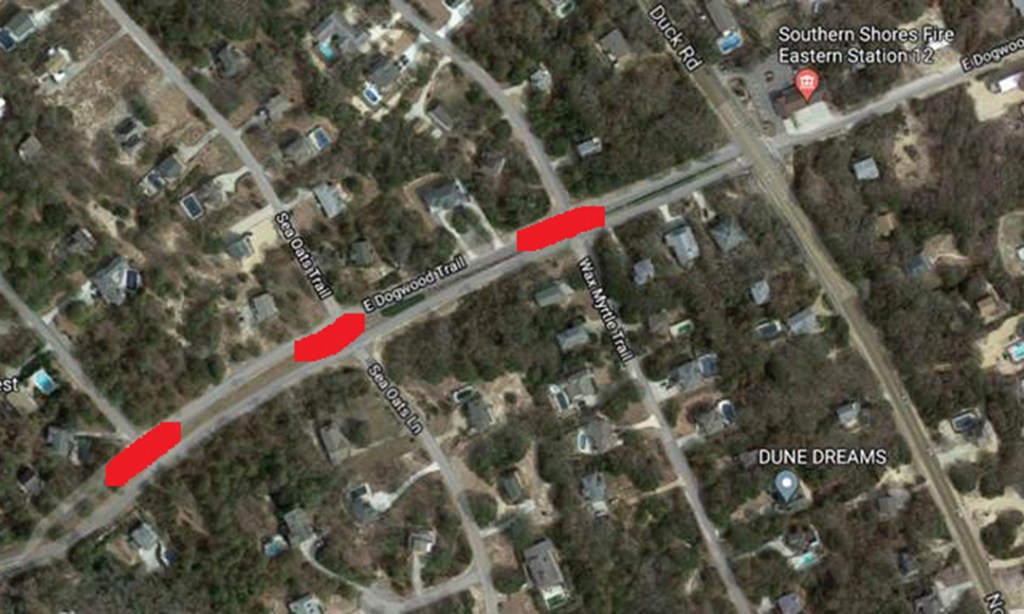 Southern Shores closed the medians on E. Dogwood Trail at Hillcrest, Sea Oats and Wax Myrtle this past weekend and will continue every weekend as needed. Vehicles going in either direction will be able to make right hand turns, but not left.

Traffic was a hot topic at the Southern Shores town council meeting July 6 as councilmembers discussed and brainstormed ways to reduce cut through traffic on peak travel days, settling on the decision to close the medians on East Dogwood Trail at Hillcrest Drive, Sea Oats Trail and Wax Myrtle Trail.

After unexpectedly heavy Memorial Day weekend traffic, town manager Cliff Ogburn added two weekends in June with “no left turn” signs in four more locations, totaling eight throughout town. On June 27, the town placed road blockades on Hickory Trail, Sea Oats Trail and Wax Myrtle Trail for all except local traffic. However, even these measures have proven only mildly effective in controlling the onslaught of cars in residential areas.

According to Ogburn, there are difficulties in enforcing the road closures. “You can’t pull someone over without knowing if they live on the street – pulling someone over because they have an out of state license place. The police would almost have to follow them home to verify if they’re local. In large part – and we suspected this may be the case – unfortunately they’re being ignored by [some].”

Closing the medians, some questioned, could make the situation more difficult for residents, too. People who live in Southern Shores who are trying to get to their home on East Dogwood would have to go up to NC 12 and over and come back.

At first, Mayor Tom Bennett was hesitant to approve restrictive regulations for locals. “A resident goes to the grocery store and they have to go through the same thing the tourists are putting themselves through to get to Corolla or Duck. I personally couldn’t support that – blocking the turn lane on East Dogwood across the median.”

The council agreed that they don’t have full grasp of the source of the traffic issues, as the no left turns did not have the impact they were hoping for.

Councilmember Matt Neal shifted the conversation to safety concerns, saying he would be in favor of closing the median on Dogwood: “I’ve seen people trying to go around the barricades and I’ve seen a couple of near misses. If you close the median, you don’t have that cross traffic.” Neal suggested putting the barricades up and down the same day (Saturday).

Related to the other weekend restrictions in town such as blocking off streets, Conners questioned how it may affect people getting to the country club or to church on Sunday.

“This is rapidly approaching affecting more than just the residents in Southern Shores,” he said.

Neal said, “If you had buy-in from residents on both streets – East Dogwood and Hickory – I’d be up for it.”

Neal made a motion to extend further authority to Ogburn to take additional traffic mitigation efforts to close the medians on East Dogwood at Hillcrest Drive, Hickory Trail, Sea Oats Trail and Wax Myrtle Trail and to include a road closure of Hickory Trail as the town manager deems necessary.

The motion passed, with Conners dissenting.

“It’s not an edict,” said Neal, emphasizing Ogburn’s authority. “If it helps, it’s a small inconvenience.”

Councilmember Elizabeth Morey said that residents of that neighborhood would have to take a longer route, “but I really think they’d be ok with it . . . if it doesn’t work we’ll take the rope and post up.”

Ogburn is moving ahead with the three median closures which took effect July 10 and 11 and will continue every weekend as needed, but the Hickory Trail closure will take more time to implement to give residents an opportunity to plan. In 2019, a majority of Hickory Trail residents signed a petition to make their street a dead end, but at the other end. The town’s concern is that the closure will cause a turnaround problem at the end of the street.

Residents on the town’s distribution list received an email requesting feedback and observations about median closures, as well as requests for thoughts on a Hickory Trail road closure in the future. Said Ogburn, “The Council has been very cautious regarding implementing changes to the traffic problem and this is another step to see what the impact is.” He further noted that town police officers have the discretion to raise and remove barriers if they deem necessary.