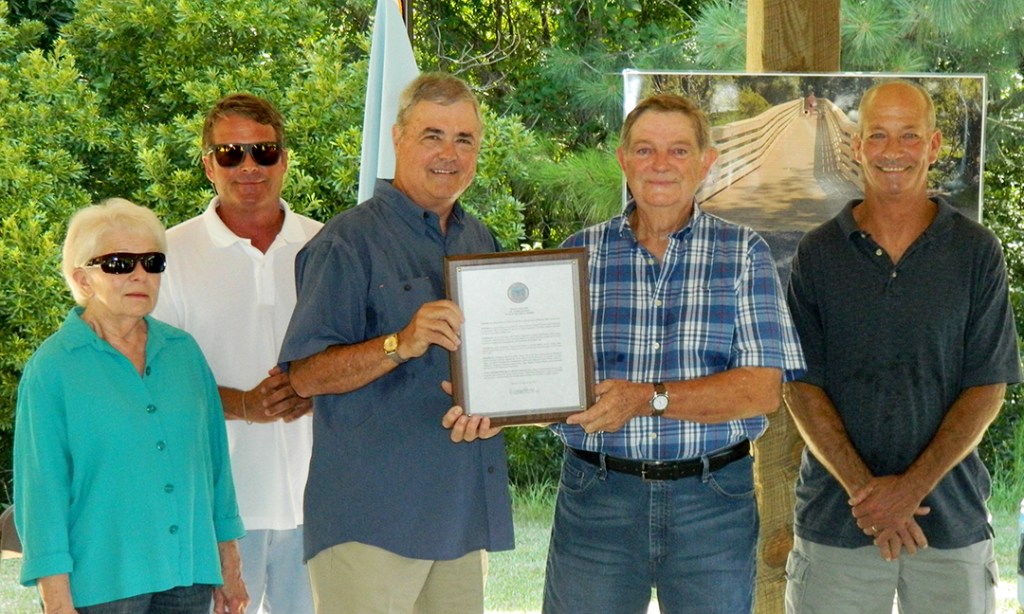 Kitty Hawk Mayor Gary Perry, second from right, was recognized Thursday for his years of commitment and service to the Town of Kitty Hawk by fellow council members, from left, councilmembers Lynne McClean, David Hines, Mayor Pro Tem Craig Garriss and coucilmember Jeff Pruitt. Perry was elected to the Town Council in 2005. In 2007 he was selected to serve as mayor pro tem and in 2013 and 2017 elected as mayor. Philip S. Ruckle Jr. photo

Speaking to a small crowd gathered at Kitty Hawk Park on a recent sunny and beautiful Thursday morning, Kitty Hawk town manager Andy Stewart announced the completion of a connector trail between the park and a 1.8 mile trail located in the adjoining Kitty Hawk Woods Preserve.

“I am super excited that this project is finally completed,” said Stewart. “I know it will bring awesome experiences for people to experience nature for many years to come.”

Use of the town owned conservation land stretching almost all the way from West Kitty Hawk Road to Birch Lane Trail has been discussed for several years. With parking and other amenities already in place at Kitty Hawk Park, the idea of building an access to the more than 460 acres of undeveloped real estate appeared to be a workable plan. Considered mostly marsh acreage, there are several high ground ridges that would make excellent hiking and biking trails.

Stewart said the idea of a trail connection started out as a simple “wouldn’t this be cool” comment by Town Council members.

“It may sound cool,” Stewart commented, “but don’t forget that these things cost money.”

Stewart went on to say it wasn’t long before the “cool” talk turned into action when Mayor Gary Perry gave suggestions to town staff on how to fund the project.

It was about the same time that councilmember Jeff Pruitt and Recreation Board chair Paul Henriques were out in the preserve in the middle of summer wading around in chest deep and snake infested waters with a GPS to determine the shortest route across the marsh to make a connection.

In 2018, the town applied for grants with the Dare County Tourism Board and the Recreational Trails Program with the Department of Natural and Cultural Resources.

Although the Tourism Board awarded Kitty Hawk a $47,592 grant, the town failed to score high enough to receive the state grant.

Securing a Tourism Board grant extension, Stewart called Bob Taber, the town’s contact for the state grant and the two discussed what was lacking in the state application.

“We took his advice on a second submission a year later,” explained Stewart. “We received letters of support from the Dare County School Board, Chamber of Commerce, the Outer Banks Hospital and any other person councilmember Lynne McClean could get to sign a letter of support. If you had a pen, Lynne made you sign.”

The second time around, North Carolina Department of Natural and Cultural Resources awarded Kitty Hawk a $69,408 grant. Coupled with the Tourism Board grant, the town now had $117,000 to complete the project. With some creative ideas for trail construction from town engineer John M. DeLucia and a crew of volunteers to clear and mark any existing overgrown paths, the project was completed with no out-of-pocket funds.

That’s not to say it was smooth sailing all the way.

Although the land is owned by the Town of Kitty Hawk, the North Carolina Coastal Reserve manages it.

Earlier this year, Town Council members were caught off guard when informed that Coastal Reserve Program staff would require a memorandum of understanding regarding construction of the access and that bikes and horses would not be allowed on the town owned land. After considerable discussion and public comments at a March 15 Town Council meeting, it was decided not to accept the NC Parks and Recreation Trust Fund grant.

Then, in April, Perry advised that an agreement had been reached and construction of a southern crossover access to Kitty Hawk Woods would begin soon.

At the July 15 dedication, Stewart said the project was a team effort.

“While this project may just seem like a bridge over some water,” he explained, “I personally feel that it involved more effort and teamwork than any project I have ever been a part of. This bridge, to me, represents all good things that happen when you work together as one to accomplish a goal.” 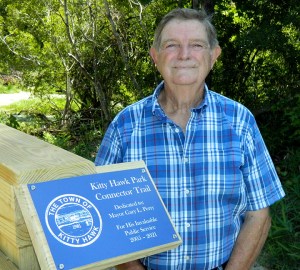 In recognition of his work and commitment to Kitty Hawk and in making a significant contribution toward the trail connector becoming a reality, Perry was almost speechless when presented with a plaque of appreciation and informed that the Kitty Hawk Connector Trail was dedicated in his honor.

Following the dedication ceremony, Erik D. Alnes, North Carolina Coastal Reserve northern sites manager, led a number of interested individuals on a tour over some of the new connector and 1.8 mile trail.