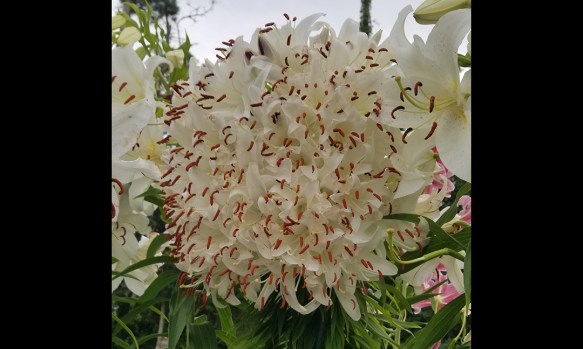 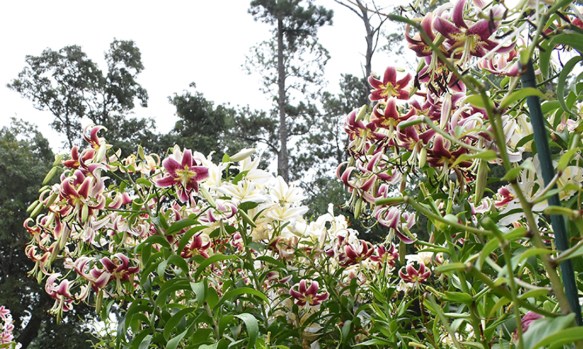 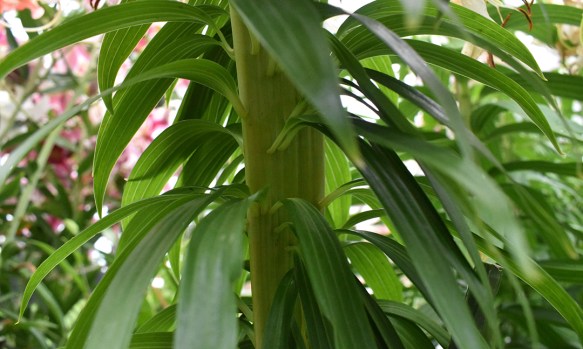 Signs of fasciation in a garden include flattened single stems that have many blooms, like this one. Danielle Puleo photo 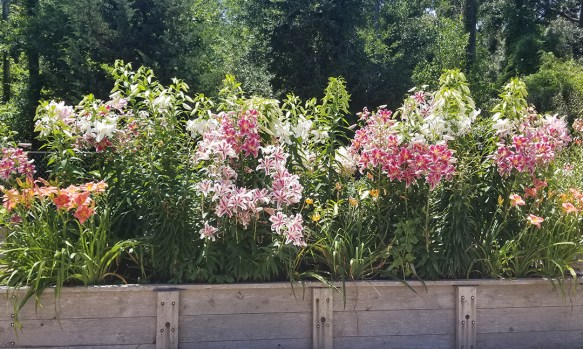 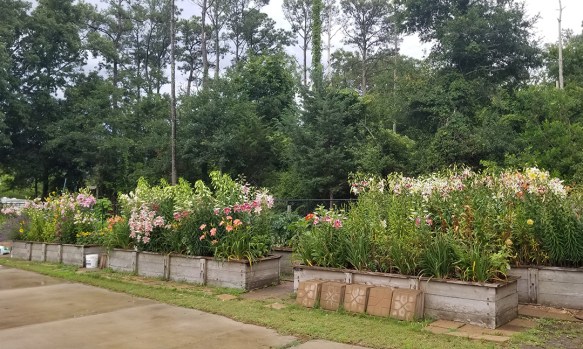 Gardens have long been regarded as breathtakingly beautiful sanctuaries full of life and abundance. Cared for tenderly by the hands that first planted their seeds, gardens have always had a special place in the hearts of those who tend to them. Plants and flowers seem to have a mind of their own, at times, and can surprise us with just how full of life they become.

For Jule Scarborough, this is the case. Her garden was built along the driveway toward the front of her home at the northern end of Roanoke Island. Three years ago, Scarborough and her husband Marty Layman took on a garden project, but had no idea it would take off as much as it has. The phenomenon they have experienced throughout their flower beds is something unlike any other and has been given a rather unusual name: fasciation.

Scarborough explained to The Coastland Times that she was so intrigued by her garden, she called the local Ag Extension office to see if someone could come out to explain what was going on.

Tanya Lamo, county Extension director in agriculture-horticulture, visited the Scarborough/Layman residence in late June to investigate. After spending some time with the lilies in particular and going back to research, Lamo’s conclusion was that the lilies in Scarborough’s garden were experiencing the phenomenon of fasciation.

“Plant fasciation is defined by Michigan State University Extension as the abnormal fusion and flattening of plant organs, usually stems, resulting in ribbon-like, coiled, and contorted tissue,” Lamo wrote in an email to Jule after her visit. Fascination can cause plants to increase in both weight and volume, which is exactly what Scarborough’s garden has experienced. The MSU Extension goes on to explain that there is often a concentration of leaf or flower beds in the area with fasciation.

The curious thing about this garden is that Scarborough and Layman had built 15 raised beds (2-ft. high, 3-ft. deep and 16-ft. long) to house their flowers, plants and vegetables, and fasciation is taking place in more than one of their flower beds.

Over 50 types of lilies are currently growing in the garden, most of which have peaked three times this spring-summer season. Some lily stems have over 100 blooms. Scarborough has even named one of these flowers “Medusa” as an ode to its incredible number of flowers on a single stem.

The Coastland Times reached out to Lamo and got her take on the situation, specifically the cause of the phenomenon. “This can be the result of different things,” she started, “it can be because of a random mutation or insects and disease . . . I don’t think this is a case of the latter.”

Lamo explained that Scarborough has many different varieties of oriental lilies. Sometimes when flowers are newly hybridized, their genetic code is not stable. The cause of the mutation could be related to these particular lilies being of a newer hybridization, still working out the kinks.

Another theory Lamo shared had to do with the natural organic matter Scarborough had used for the soil of the flower beds. “The flower beds have blood and bone meal,” Scarborough explained. She then laughed and said, “In trying to build the soil, I thought it was just my fertilizer . . . I must have overdone it. And I overdo everything.” However, this does not seem to be the case.

A mix of animal blood and bone meal along with manure and some gardening soil makes up the composition of what the flowers are currently growing in. Scarborough said the blood and manure provide nitrogen, while the bone gives the flowers phosphorous and calcium. In her veggie boxes, Scarborough has fish from Wanchese. No fertilizer, just organics.

Not only are the flowers producing hundreds of blooms on single stems, they are also splitting their stems in two and growing much taller than average. “I have lilies that are five and six feet tall,” said Scarborough. Lilies typically do not exceed three feet in height and normal stems do not split in the middle. These are all signs of fasciation, which Lamo confirmed is what this particular garden is experiencing.

The first healthy bloom for the flower beds occurred last year (a year after being planted). Scarborough tries to aid in all of the pollinating herself, making sure bees, hummingbirds and butterflies visit her flowers and plants to keep them alive and well. This year was the first time this phenomenon had reached her garden, and may be the last. She has been documenting the unusual deformations in her garden since it began and will recreate the steps for next year’s season to see if fasciation occurs once again.

The garden is an experience in and of itself. Walking amongst the unusual cultivar is something many may never have the opportunity to do, so Scarborough has been taking photos and writing everything down as she goes. But she is no stranger to materializing her blooms on film for others to enjoy.

For the first birthday Layman celebrated with Scarborough, he gifted her gardening tools and daffodils so she could begin her own garden. After moving outside of the hustle and bustle of a city to rich farmland, Scarborough began growing her garden around their outdoor pool and created her own “oasis.” She began taking photos and making the pictures into cards to send to friends and family, sharing her garden with the world, which she plans on continuing for years to come.