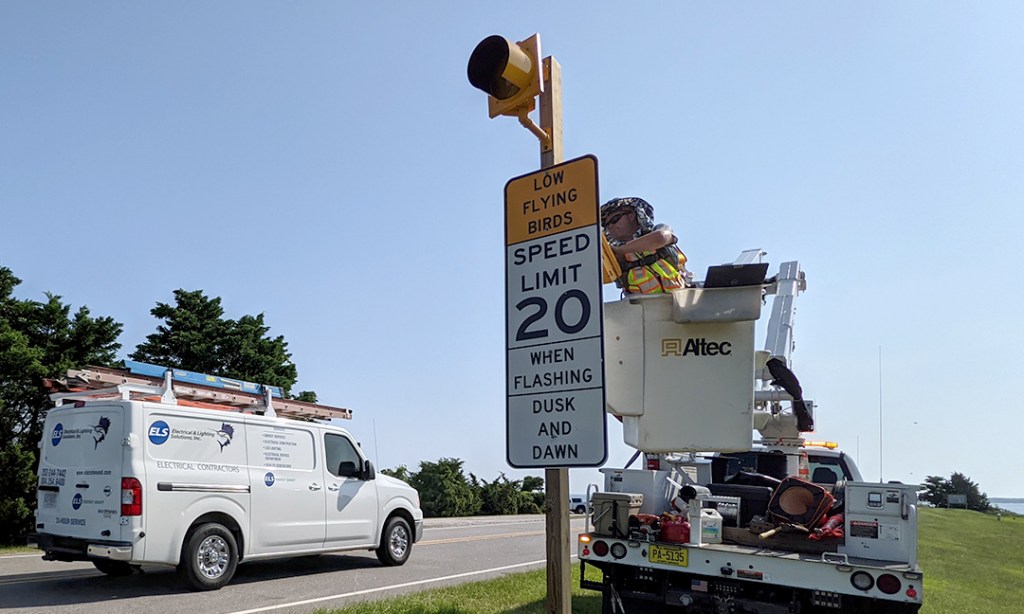 An NCDOT technician sets timing controls on flashers that will remind motorists of lower dusk and dawn speed limits during the annual purple martin roost under the Old Manns Harbor Bridge in Dare County. NCDOT photo

The annual summer purple martin roost has begun on Croatan Sound, which means it is time for motorists to slow down for the birds, stated a press release from the North Carolina Department of Transportation.

NCDOT has temporarily lowered speed limits from 55 mph to 20 mph on the William B. Umstead Bridge at dusk and dawn. The Umstead Bridge in Dare County, known locally as the Old Manns Harbor Bridge, connects the northern end of Roanoke Island with the mainland.

From July through August, the west end of the bridge becomes home to as many as 100,000 purple martins as they prepare for their annual migration to Brazil. The birds roost under the bridge at night, departing at dawn to feed and returning at sunset. The flock is so large during its peak that it can be seen on radar.

Since 2007, NCDOT has partnered with the Coastal Carolina Purple Martin Society to educate the public about the flock and protect the birds and motorists. NCDOT activates flashing lights and lowers the speed limit on the bridge at sunrise and sunset. The speed limit is monitored by law enforcement and allows motorists and birds safe passage across the sound. Since the lights and speed limits were installed, the Coastal Carolina Purple Martin Society has seen a dramatic decline in bird deaths around the bridge.

As an alternative, motorists can use the Virginia Dare Memorial Bridge to travel between Roanoke Island and the mainland. “Those wishing to view the flock safely can do so at Dare County’s multi-purpose pier at the west end of the bridge,” stated the NCDOT release.