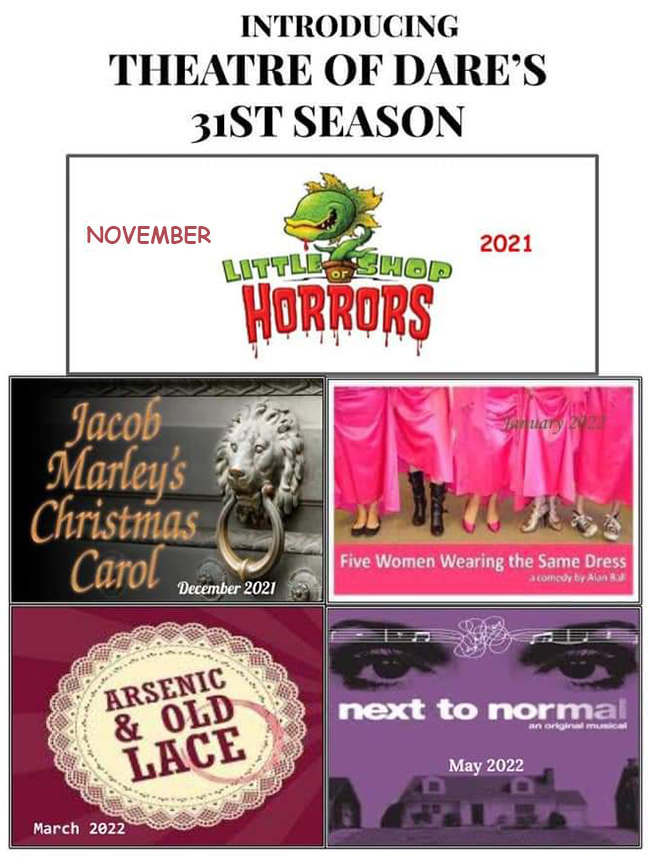 Theatre of Dare, community theatre for the Outer Banks, is selling season tickets for its 31st season productions. Season tickets provide admission to all five shows scheduled for the 2021-22 season.

The “Because we were essentially shut down last season, at least in terms of live, on-stage productions, we did not offer season tickets,” says Stuart Parks, president of the Board of Directors. “During our one live show, The Diary of Adam and Eve, we had many inquiries about when season tickets would be available for the upcoming season, so we’re really excited to be able to offer them again.”

Most of the productions previously scheduled for Theatre of Dare’s 30th season have been rescheduled for the upcoming months, beginning with Little Shop of Horrors in November, followed by Jacob Marley’s Christmas Carol in December; Five Women Wearing the Same Dress in January; Arsenic and Old Lace in February; and Next To Normal in April. Most productions will be staged at Roanoke Island Festival Park, with the Christmas show slated for the Dare County Arts Council. Both venues are in Manteo.

Individual adult tickets for all five shows would cost $60 – $10 for plays, $15 for musicals. Season tickets are $50 each, so it’s like seeing one play for free.

“We continue to be enthusiastic about the support we’ve received from the community, and we’re looking forward to continuing our trend of gaining even more season ticket holders this year,” Parks continued.

To purchase season tickets, get more information or to become involved with Theatre of Dare, visit theatreofdareobx.com.