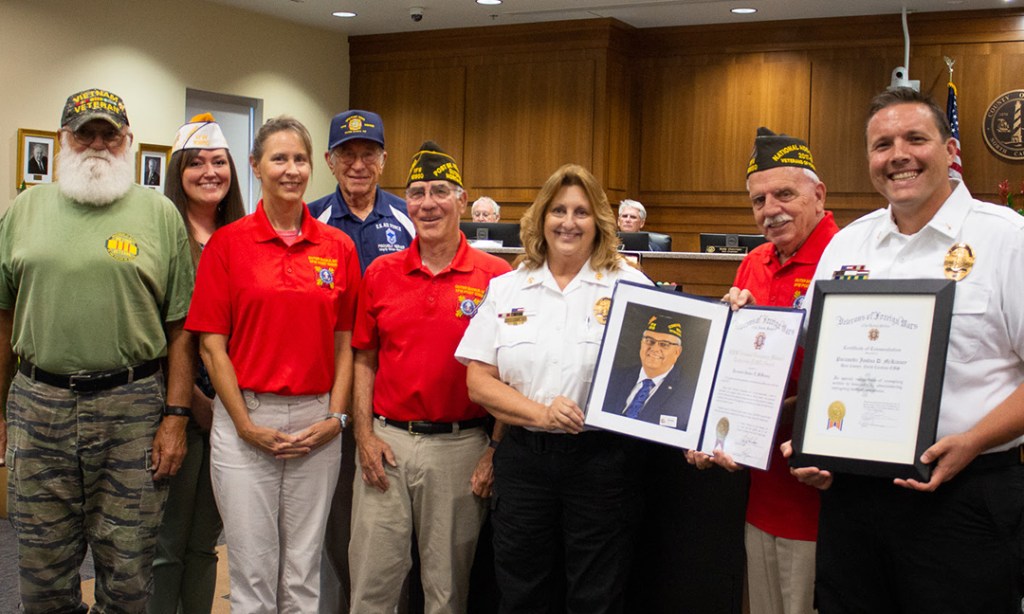 Each year, the Department of North Carolina VFW selects individuals from three separate categories to receive the Public Servant Citation Awards: EMTs, law enforcement officials and firefighting personnel. Those who are eligible include any individual who actively provides emergency medical treatment, rescue services or civil disaster assistance as a member of any public or volunteer company that is organized to provide such services.

Dare County EMS director Jennie Collins nominated McKenney for the award, for which he was selected and recognized by Outer Banks VFW Post 10950. McKenney’s nomination was then forwarded on to the Department of North Carolina VFW competition. He was also selected as the North Carolina EMT Public Servant Citation Award winner.

According to the nomination letter from Collins, “In the years that Joshua has been with Dare County, he has excelled in every aspect possible for a paramedic. It is indisputable that his love for people is what drives him in his passion to serve. Joshua’s heartfelt desire is to provide the best possible patient care in both medicine and caring. His benevolence is one of his many qualities that our community benefits from.”

McKenney was originally hired with Dare County EMS as an advanced EMT in 2005 and attained his paramedic credential in 2010.

In 2012, McKenney moved overseas to serve as a missionary in India and is fluent in Hindi. After completing his mission work in India, he returned to Dare County EMS in 2016 as a paramedic.

In 2017, McKenney applied for the highly competitive flight paramedic position on Dare MedFlight and was successfully appointed to the position. In 2018, McKenney committed to the extensive amount of studying, time and training that is required in order to obtain his flight paramedic certification.

McKenney has also continually advanced himself through both professional and personal education and currently holds two degrees: a Bachelor of Science degree in biblical studies and teaching English as a second language from Liberty University and a Master of Arts in religion in church ministries from Liberty Theological Seminary.

“In addition to his many attributes, McKenney has a passion for teaching,” according to Collins’ nomination form. “Teaching EMS providers – from the newest student attempting to gain a foothold in the industry to the most tenured provider – takes the utmost patience, strength, commitment, encouragement, supportiveness and wisdom to provide quality outcomes. These qualities are consistently demonstrated by Joshua and have resulted in catapulting him to a place of admiration among his students and peers.”

In addition to his work with Dare County EMS, McKenney is also a North Carolina Office of EMS Level 1 instructor and an adjunct instructor at the College of The Albemarle, where he teaches new EMTs, advanced EMTs and paramedics.

“Joshua is a knowledgeable and natural educator, where his teaching style provokes excitement and energy into his students that translates into compassionate, strong caregivers,” Collins wrote in her nomination form. “His innate ability to teach in this profession creates a bond between his peers that grows even deeper with time. Joshua is a devoted public servant, as evidenced by his years of public service and with his commitment to teaching others. He is a mentor that his coworkers turn to for direction and advice, long after the formal education process is complete. Joshua is a loyal, accomplished and selfless public servant. The qualities detailed in this nomination capture only just the highlights of his superior character and love for his community.”

In addition to being declared the winner for the state of North Carolina, McKenney’s nomination has also been advanced for consideration on the national level and he is now a candidate for the VFW National EMT of the Year Award, which will be presented at the 122nd VFW National Convention that is scheduled to be held in Kansas City, Missouri in August.