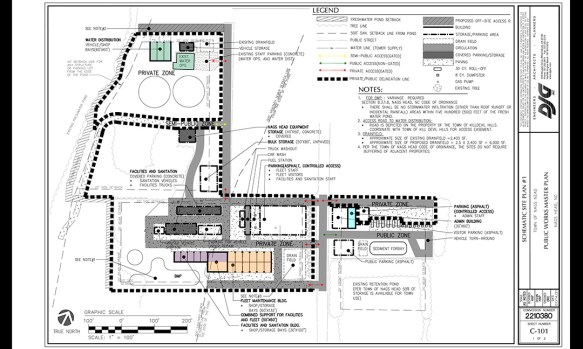 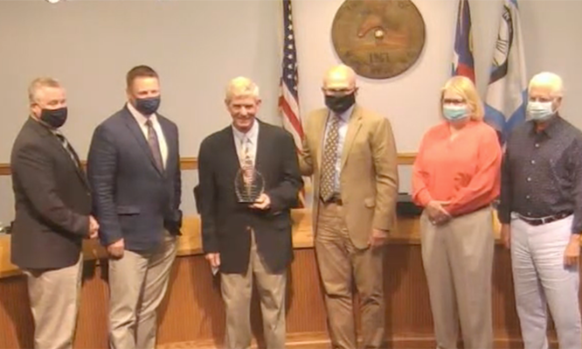 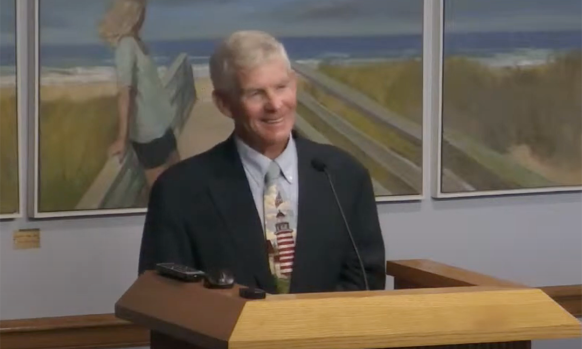 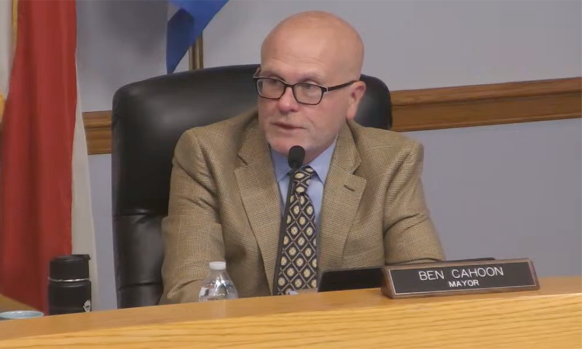 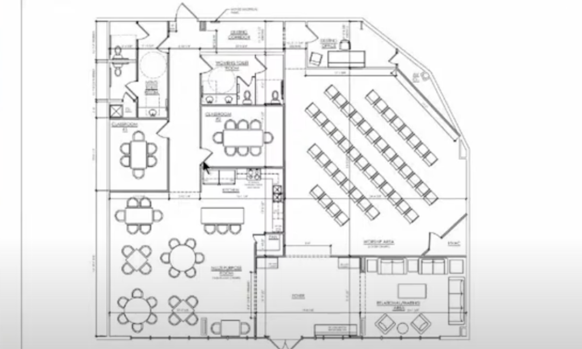 The August 4 Nags Head Board of Commissioners meeting began with an update from Dowdy Park Farmers Market director Paige Griffin. According to Griffin, the market has seen record success and visitors this year. There are plans for the coming year including toga on Tuesdays and holiday markets. “It’s much more than a farmers market, it’s a place where communities gather,” she said.

A representative from Outer Banks Sporting Events gave a short presentation about the TowneBank Half Marathon scheduled for November 5 or 7, departing and returning this year from the Soundside Event location.

Next, former Fire Captain John Kenny was honored with an award of appreciation for 33 years with the town. Said current the fire chief, “During John’s time with the Nags Head Fire Department he has witnessed many changes within the fire department and ocean rescue. John accepted and adapted to these environments but never once forgot to honor the past and history of our fire department. Captain Kenny, your service and contribution to Nags Head fire and ocean rescue has made it a better place. Thank you for your 33 years of courage, commitment and compassion.”

Commissioner Renee Cahoon echoed, “John, you’re the model of what every public servant should be. Your contributions go way beyond what the public knows about – you’ve contributed in so many ways big and small to the Town of Nags Head and I don’t think anybody can thank you enough for everything that you’ve done.”

Next, the board held a public hearing to consider a special use permit/change of use application submitted by Outer Banks Community Church to operate a religious complex within Croatan Center Shopping Center, unit 12 (formerly RadioShack).  The property is zoned C-2, General Commercial and is located at 4711 S. Croatan Highway in Nags Head. The request was unanimously approved by the board.

A second public hearing was held to consider to consider the Public Beach and Coastal Waterfront Grant pre-application for Epstein Street Beach Access. According to planning director Michael Zehner, the town was invited to submit a final grant application for the Epstein Street Public Access through the Division of Coastal Management’s Public Beach and Coastal Waterfront Access Grant Program for $200,000.

Zehner then updated the board on the LED light conversations taking place in the community, showing different styles of fixtures and explaining the brightness and color temperatures available, as well as discussed the amber street lights in four locations that would offer gentle light to nesting sea turtles.

The main event of the meeting was the presentation of a public works facility master plan. At the initiation of the board, deputy town manager Andy Garman, together with DJG consultants, the town engineer and public works directors, created a plan that would encompass the area on Lark Avenue and Pond Avenue including the water plant, the bulk yard brush yard and the main public works site. “This project envisions doing a sort of redevelopment of these properties to analyze future public works needs over a long-term horizon and look at providing facilities that would project our future needs and accommodate growth and bring us up to speed with what our needs would be for fleet sanitation facilities, maintenance administration, water operations and water distribution,” said Garman.

The presentation included two schematics which included a new distribution facility, parking, vehicle storage needs and a public works administration building that would include a recycling center and drop off area. There would be a separate area for shared fleet maintenance and facilities and sanitation building, showers and bathrooms for employees, a fueling center and car wash and areas for sanitation vehicles and larger equipment. The area would also include bulk storage for items such as seasonal lifesaving stations and access to a new water distribution building that would be shared with water operations. To do the redevelopment of the parcel, the town would be looking at approximately $14 million.

Commissioners asked questions about the usefulness of facility as the town plans for growth in the long term, 25 or 50 years down the road. No decisions were made at the meeting.

In the commissioners agenda portion of the meeting, commissioner Cahoon encouraged police vigilance at crosswalks and also urged the public to “please be considerate of anyone in the crosswalk. That’s a very vulnerable position to be in and the last thing we want is a tragedy.”

Commissioner Webb Fuller proposed that the town endorse the concept of looking at the Harvey site and the southwest corner of the Dare County Tourist Bureau as a formalized wind-water activity site for sports such as windsurfing and kiteboarding.  “That would give us access for a certain population that fits a lot of local people as well as a lot of out of town people,” Fuller said.

The meeting ended with a discussion about the much-debated Soundside Event Site property, as well as a request from the public for input. “There will be an opportunity for public engagement. I would ask that people come out and voice their opinion,” said commissioner Kevin Brinkley.

“I’ll be looking and listing for real justification of the need from the community and from certain user groups who may benefit from that kind of facility. I expect and really hope to hear . . . about what they expect this board to do and what their aspirations are for [the site],” Mayor Ben Cahoon said. “This is such a sensitive subject and I’m not sure what the format will be, but I hope people know that it’s an important issue to the board, and the board really wants to hear from people,” he continued.

Remainder of season for The Lost Colony canceled