NC 12 Task Force hears briefing: ‘We’ve got our work cut out for us’ 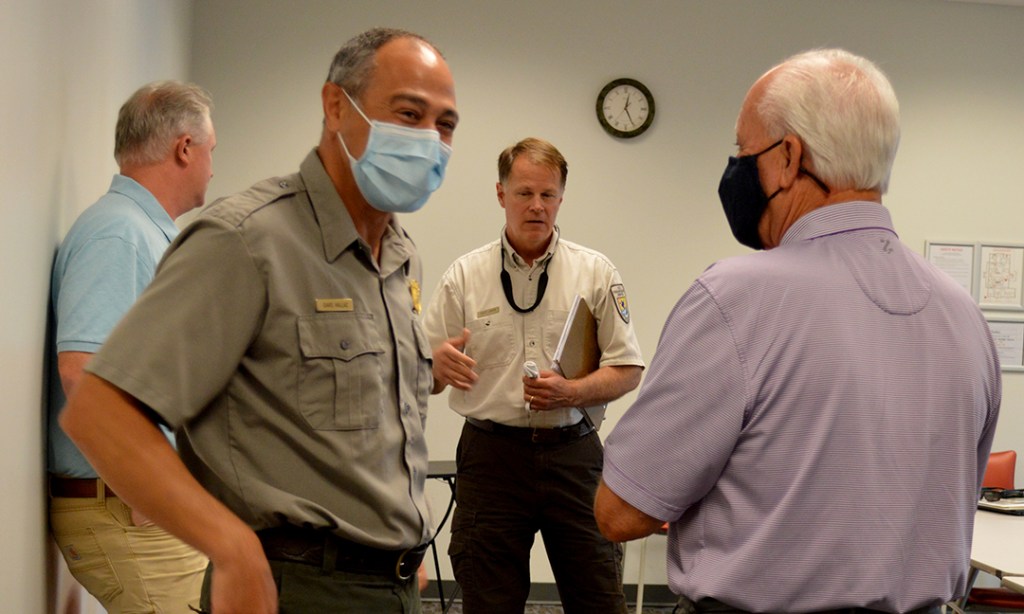 “We’ve got our work cut out for us,” said Robert L. Woodard, chairman of the Dare County Board of Commissioners, to the NC 12 Task Force.

The task force met Aug. 18 at the Dare Administration Building.

Woodard wants to “put something out there” by January 2022. “People are watching!”

Agency representatives and three elected officials gathered in the same place the week before to start the process of prioritizing the hot spots and options.

The group began at the north of Hatteras Island with the two hot spots in Pea Island National Wildlife Refuge. Other areas of Hatteras and Ocracoke islands can’t be accessed without fixing NC 12 in the Refuge.

The island at the Pea Island Visitor Center is experiencing one of the two highest erosion rates among the hot spots: 4.8 meters per year. The second area in the refuge is called the Canal Zone. Its erosion rate is 2.5 meters a year.

For a longer term, building bridges in the existing right-of-way, or bridges in place, was ruled out as not viable as a long-term solution. Bridgers told the subcommittee that the New Inlet (Etheridge) Bridge “was never conceived as an ocean bridge.”

Scott Lanier, Pea Island Refuge manager, told the subcommittee, “we can’t maintain the impounds indefinitely.” He said long term, the impounds are not a priority, but “We’ll keep them going as long as we can.”

Bridgers told the subcommittee, that constructing a bridge costs $74 million per mile.

To build a 10-mile connector bridge between the new Oregon Inlet bridge to the Rodanthe bridge is estimated at $750 million or three-quarters of a billion dollars. Add in the cost of moving the Cape Hatteras Electric Cooperative transmission lines and pretty soon the long bridge is one billion dollars.

The subcommittee is scheduling a field trip to Ocracoke and planning to meet Sept. 8.