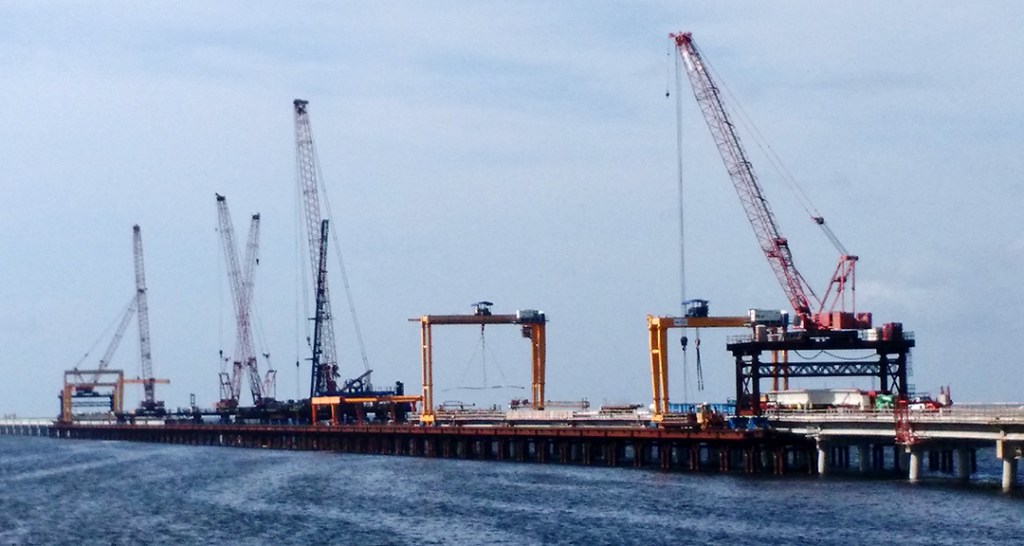 On August 31, the two ends of NCDOT’s Rodanthe Bridge were connected.

On September 2, in a virtual update presentation, Pablo Hernandez, NCDOT’s resident engineer, said the bridge is 88% complete. Shifting traffic is predicted for February or March of 2022.

He called the progress “good” with few rain and high wind days to deter work since the last update in June.

A little over $144 million has been paid out. The total bill has been raised to $155 million due to additional work to help Cape Hatteras Electric Cooperative hang transmission cable. Some $400,000 was added to the contract.

Completion is closing in:

– 342 of the 352 pilings have been installed. Herandez thinks all piles will be installed by end of September.

Construction on the south end of the bridge stopped on August 14. Crews are now dismantling and packaging for shipping the trestle system. Road work at the south end is slated to start October or November and the traveling public should expect lane closures.

Also on the south end, work has started to install expansion joints in the bridge. Currently small gaps about five feet wide occur every four spans. Additional concrete and steel components must be installed.

Crews on the north end will push ahead to complete the bridge.

Hernandez addressed what will happen at the end of the remnant of NC 12.

Currently, about 33 feet south of the boundary line with Pea Island National Wildlife Refuge, a driveway to nowhere will be created to facilitate vehicles turning around.

However, NCDOT is developing a modified cul-de sac plan and will submit that plan for agency review and permitting. A 50-foot wide circle would be built to allow emergency vehicles, delivery trucks, trash trucks and the occasional truck pulling a trailer to turn around.

Hernandez cautioned that the cul-de-sac is not authorized yet but something that could happen.

If the cul-de-sac happens, parking would not be allowed, said Hernandez.

In the question session, concern was expressed about the operation of the round-about.

One person commented Dare County Sheriff’s Office deputies would need to be stationed at the round-about to keep traffic moving on Fridays, Saturdays and Sundays.

The next Rodanthe Bridge update is scheduled for December 2, 2021 at 6 p.m., by either remote delivery or face-to-face in Rodanthe.