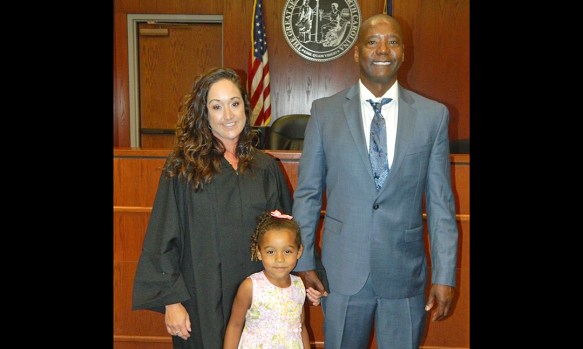 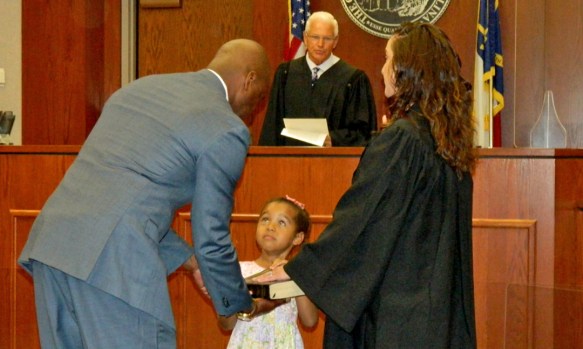 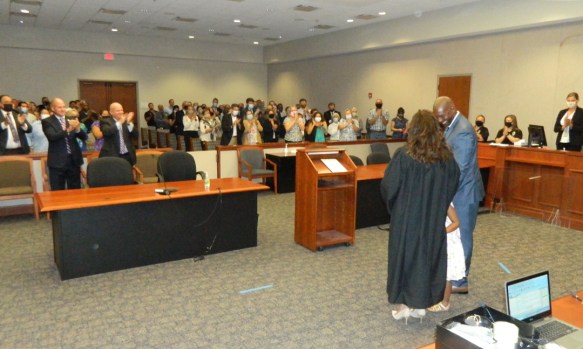 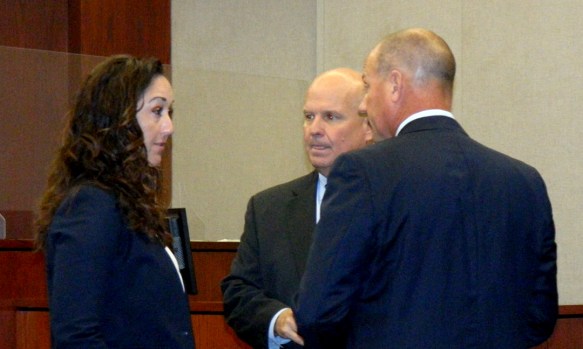 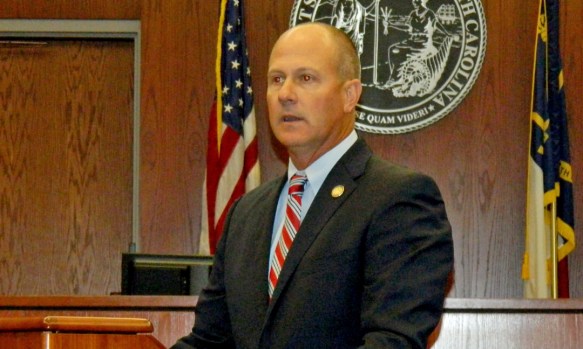 In a large Dare County courtroom overflowing with family, friends and several co-workers, everyone watched intently as Bland, aided by her husband Lamont and their five-year-old daughter Arya, donned her judicial robe and recited her oath of office.

A 1998 graduate of Manteo High School, Bland graduated from the University of North Carolina at Chapel Hill with a 2002 degree in interpersonal and organizational communications followed by a juris doctor law degree in 2008.

“It was 13 years ago on this day, September 2, that I was sworn into office as an assistant district attorney,” said Bland. “It has been an honor to serve the State of North Carolina and this community in that capacity. I stand before you today truly honored and humbled, and I pledge to you today that I will be a fair and impartial judge.”

Bland then thanked God and several family members and close friends for believing in her and offering encouragement.

A press release from Governor Cooper noted that Bland has served this community well throughout her legal career. There were similar comments offered by Assistant DA Jeff Cruden, who added that he was always confident that she could handle any type case assigned.

“She has a passion for the job,” explained Cruden. “She is smart and knows the law, and I think she understands the role she will be taking as a judge. I can’t tell you how sorry I am to lose her, but I am happy for the future she has.”

Once, while more than eight months pregnant, Bland needed a donut cushion to be able to sit through a Perquimans County sexual assault and abuse case.

Womble said nothing was going to stop Bland from seeking justice for that little girl.

There was also an account in another case, against overwhelming odds, Bland convinced a judge and jury to reach a guilty verdict.

“Whenever I moved her around the district she has always been willing to do what was needed,” added Womble. “She is always well versed in the law and well versed in the facts of a case. And, once she makes a decision, she sticks with it.”

While a mood of seriousness prevailed through most of the mid-day session comments, there were some lighter moments.

One such time included an event on Bland’s first day on the job as prosecutor. According to Judge Tillett, she encountered a law enforcement officer who wanted to make sure she understood the guidelines for handling his cases. When Tillett repeated her sharp rebuttal clearly establishing that she was in charge, there was a loud roar of laughter.

It was also noted that Bland is well known for shattering a defendant’s excuse for missing a court date.

Credited with having discerning wisdom and willing to listen intelligently, Bland said she has always been interested in a legal career.

“I wanted to be a lawyer starting when I was around eight years old,” said Bland, who then related how she watched a lot of legal and crime related shows with her dad while growing up. “I decided that’s what I wanted to do.”

Bland said she thought being a prosecutor was the best avenue to make a difference and have an impact on a community at large.

“I wanted to fight for victims,” she explained. “And fight for this community to see that people that deserve to be put away in jail were. Or for having mercy on those that deserve second chances.”

“So I thought,” she continued, “that as a district court judge not only in criminal court but also family court I would be in a position to make the biggest impact on people’s lives. Now I will be doing it all. District criminal court, family court, DSS court, child support court and civil trials.”