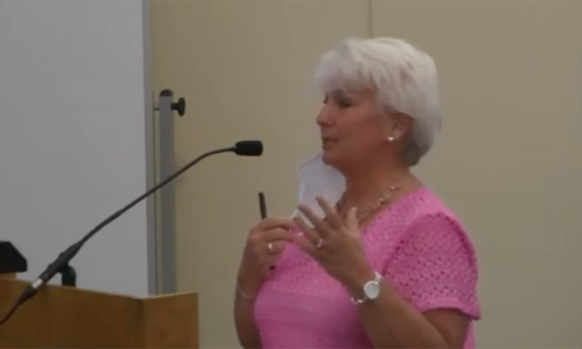 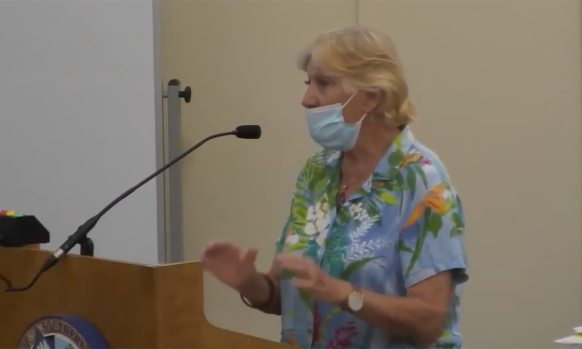 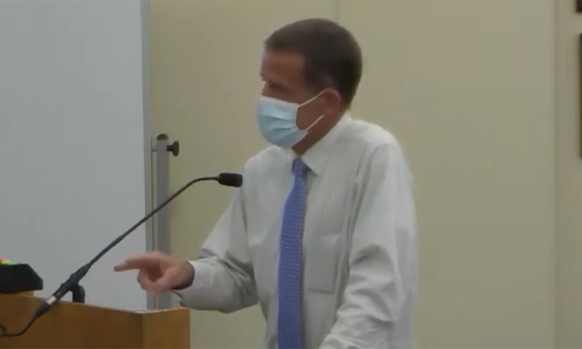 The item on the agenda was a site plan amendment submitted by Aston Properties, which owns the struggling Marketplace property. Aston is requesting to demolish a portion of one building to construct Marshalls, as well as to create 6,000 square feet retail space for a business yet to be determined. The request also includes plans for parking lot modifications which would require removing some trees.

During public comment, one community member expressed concern about the noise that may be generated during the construction phase, as well as the increased tractor trailer traffic and trash collection noise.

At one point during the meeting, engineer and the senior project manager Kimberly Hamby with Timmons Group said that they were “here to build a big box store,” drawing resident pushback.

One resident cited the vision statement in the 2008 Land Use Plan which says that the community is served by small-scale local convenience shopping in the commercial district and “no big box retail exists or are desired.”

Aston Properties representative Karen Partee was quick to comment to the crowd that Marshalls is not considered a big box store like a Walmart or Target, but rather a “junior box store” which typically includes stores under 40,000 square feet.

“We’ve had an abundance of vacancies and those vacancies are not healthy. When you look at a shopping center that has a large amount of vacancy you automatically assume there’s something wrong with that shopping center,” Partee said. “We have an opportunity here to revitalize the center in a significant way that will be a draw for additional local operators to come in and take the rest of the vacancy. I think this will be a turning point for the shopping center.”

Regarding the trees that must be removed, Partee said that good visibility and adequate signage are essential to success. “I hope that you will join in this vision of revitalizing a shopping center for this community. If not, it’s going to continue to deteriorate, and no one wants a blighted shopping center.”

Another resident who has lived in Southern Shores for 30 years shared memories of what the shopping center used to hold, including Daniels’ department store, a fine restaurant, a cinema and an upscale women’s clothing boutique. “Having a 24,000 square foot shop is actually smaller than Daniels’ was,” she told the council. “A small box store would indeed help Marketplace and help this community.”

Council members, too, expressed approval for the project. “The question we need to ask ourselves is what do we want there? Do we want a vibrant marketplace or do we want a marketplace that looks like the old Kmart?” asked council member Leo Holland. “That Marketplace is on life support . . . If it becomes what Kmart looks like now, that doesn’t send the right image. That’s why I am favor of moving forward.”

The motion was approved unanimously, with Mayor Tom Bennett absent due to a medical issue.

In other business, the council authorized town manager Cliff Ogburn to apply for two grants. The first is a request for the Dare County Tourism Impact Grant of not more than $50,000 to help the town acquire data to better understand “the impacts that tourism related traffic generates” according to the agenda item summary. Grant money may be used to purchase barricades or other equipment that the town currently rents, and possibly to work with companies like StreetLight Data, which collects location records from smart phones and navigation devices in connected cars and trucks. StreetLight Data can offer information like where traffic is originally coming from and what weights or vehicle types are passing through, including tractor trailer or RV traffic.

The second grant comes at a greater expense to the town, but with a potentially higher return. The FEMA Building Resilient Infrastructure and Communities (BRIC) Grant, which would be used to solve roadway flooding areas in specific areas of Southern Shores, could potentially provide hundreds of thousands of dollars or more. To increase the possibility of the grant request being accepted, the town council approved a budget amendment up to $25,000 to employ the help of VHB Engineering NC in the grant application process. If the application does not make it beyond the letter of interest stage, the expense to the town will likely not be the full $25,000.

The council also approved a budget amendment for the next stage of the beach nourishment process.

Deputy Chief Johnathan Slegel was recognized for 20 years of service with the police department. Slegel was hired in Southern Shores in 2001 and promoted to sergeant six years later. In 2014 he was promoted again to lieutenant and now serves as deputy chief.