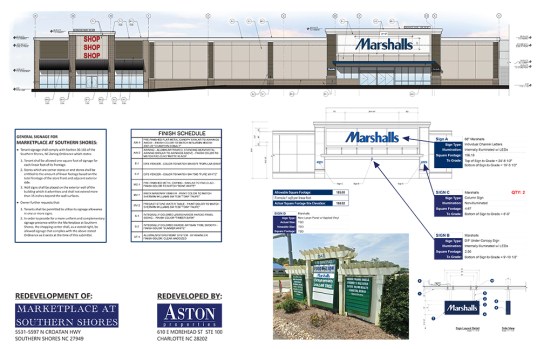 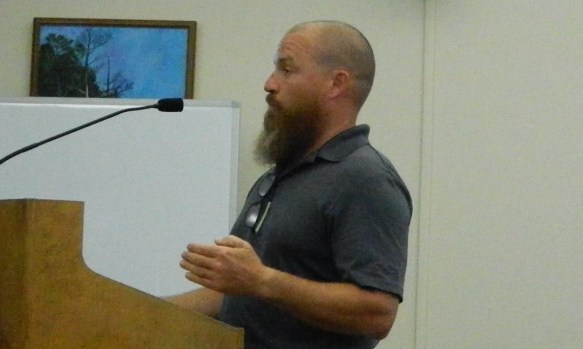 Southern Shores town engineer Joe Anlauf spoke at the August 16 Southern Shores Planning Board meeting about his review of a stormwater runoff filtration and future development plans at the Marketplace shopping center. Anlauf and project manager Kimberly Hamby are to identify any major deficiencies that need correcting before a building permit is issued. Philip S. Ruckle Jr. photo 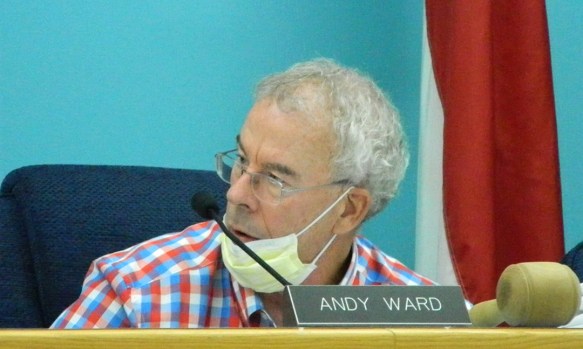 Southern Shores Planning Board members recommended approval of a Marketplace shopping center site plan amendment and began an in-depth discussion on sign regulation changes at their most recent meeting.

During the 145-minute August 16 Planning Board meeting at the Pitts Center, board members reviewed several details of the changes in store for the Marketplace. Among them are plans to demolish almost 20,000 square feet of existing structure and build a new 24,000-square-foot department store adjacent to the existing CVS Pharmacy along with another 6,000 square feet of additional retail space. Also planned are an increase in the number of parking spaces from 587 to 613 and other changes to the existing parking layout.

Records indicate the overall disturbed area will be just over 3.2 acres.

Although most of Monday’s discussion focused on the potential for increased stormwater runoff into a canal behind the Marketplace and the number of old growth trees to be removed in the parking area, recommendation was granted provided the existing filtration system for the development is examined by town engineer Joe Anlauf and project manager Kimberly Hamby to identify any major deficiencies that need correction before a building permit is issued.

The next item for the day was a discussion on several changes to Southern Shores signage regulations.

The changes, brought about by a 2015 Supreme Court decision, are intended to make the town’s sign requirements content neutral with language based on the applicable zoning district a subject property lies within, rather than on the use of the property.

“There is too much to try getting through all this tonight,” said Chairperson Andy Ward.

Ward also pointed out that the town only has jurisdiction on its own roads and not along NC12.

After an in-depth discussion on temporary and permanent signs, the lack of enforcement for sign regulations in past years and the need for permission for signs on Southern Shores Civic Association property, the board agreed to continue its review of regulations again next month.