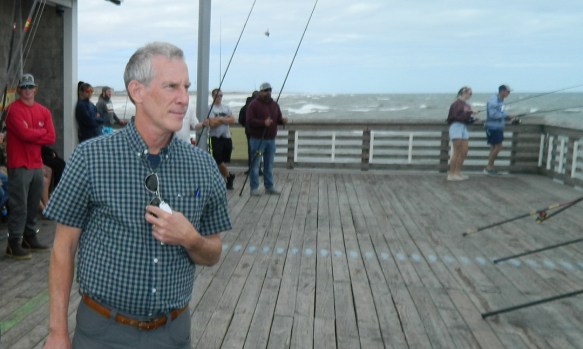 Secretary of the North Carolina Department of Natural and Cultural Resources Reid Wilson watches as a group of fishermen cast lines at the end of the pier last Friday afternoon in hopes of catching some of the red drum running along the coast. Wilson was in Dare County last Thursday and Friday touring several area NC Department of Natural and Cultural Resources sites. Philip S. Ruckle Jr. photo 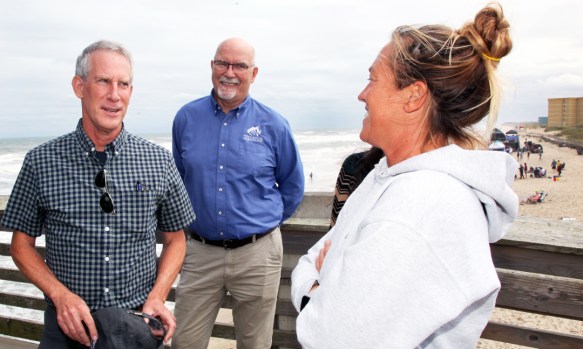 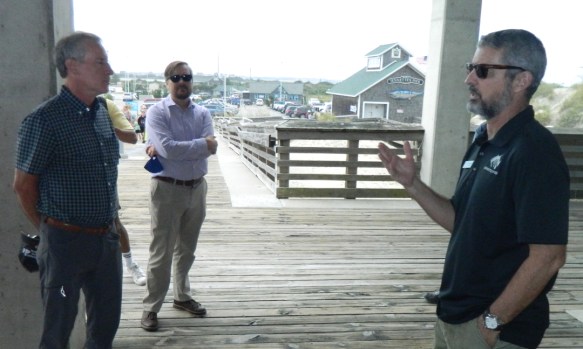 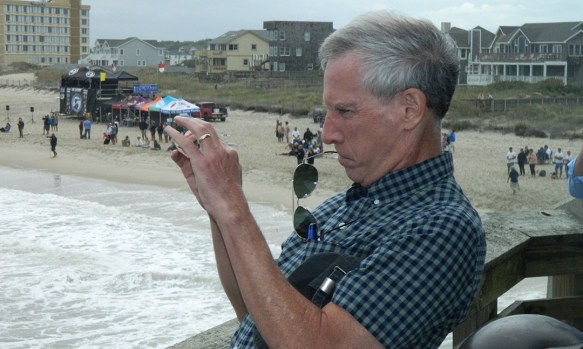 Reid Wilson, secretary of the North Carolina Department of Natural and Cultural Resources (DNCR), was in Dare County September 23 and 24 for visits to half a dozen local sites.

Wilson said while not his first time on the Outer Banks, this trip is the first time since becoming director and the visit has offered an excellent opportunity to learn more about some of the area’s history.

Prior to being named director by Governor Roy Cooper this past January 1, Wilson was the department’s chief deputy secretary, responsible for the agency’s natural resource divisions.

Prior to joining DNCR, Wilson was the executive director of the Conservation Trust for North Carolina, a statewide nonprofit that advances land conservation and connects people to the outdoors. In addition, he has been a public affairs consultant to national environmental groups and served for nearly eight years at the U.S. Environmental Protection Agency as a political appointee in the Clinton administration.

“We are the department of all the things people love about North Carolina,” said Wilson. “A lot of what we do is also focused on education.”

Expanding educational content for children is but one of the five major goals Wilson set for the department. Other goals include addressing the impact of climate change; strengthening and widening the blanket for diversity, inclusion, equity and accessibility; improved economic development for many communities; and public health protection.

Wilson went on to say his department has an important role to play in the climate change discussion by providing objective and scientific information.

“We need to present information in a non-confrontational way,” he expounded. “We need to explain what it is, and what a family can do about it. To focus on what the changes are here where I am standing.”

“Clean energy is what our future is about,” he added. “Our department has no authority over energy, but we can be a key part of that future.”

On Thursday, September 23 Wilson visited the Graveyard of the Atlantic Museum, Roanoke Island Festival Park and the Outer Banks History Center. On Friday, September 24, he was at Jockey’s Ridge State Park, Jennette’s Pier and capped his area tour by attending the Surfalorus Film Festival, sponsored by DNCR, at the NC Aquarium on Roanoke Island.

Wilson said he has a large map with pins marking each DNCR site in the state and so far has visited about half of them.

“When we return to normal it will be tremendous,” Wilson added. “I am amazed at what our sites have done so far during the pandemic.”