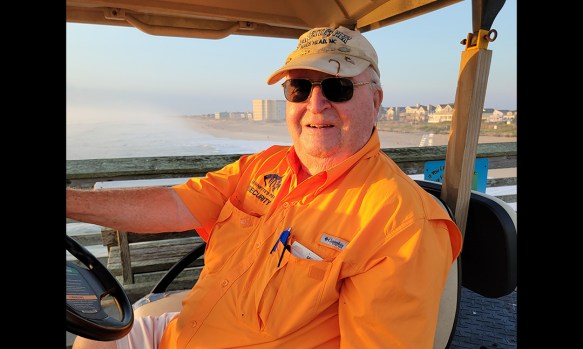 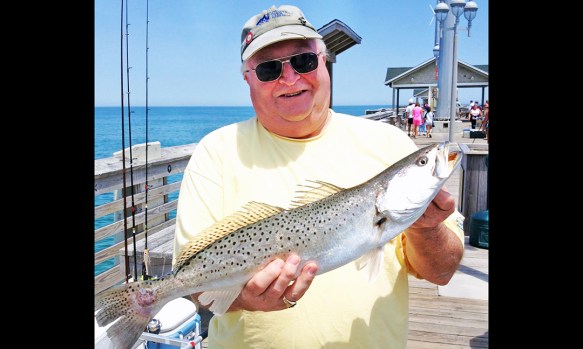 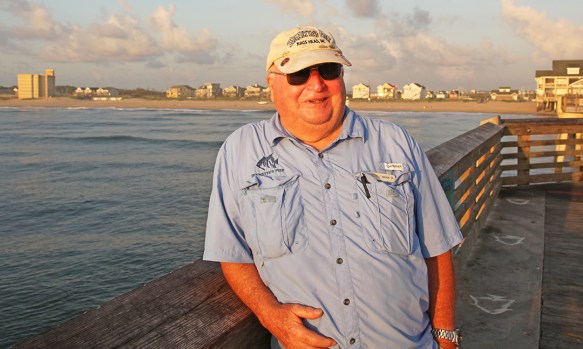 Hanging out at end of pier, Mike Preziotti waits to retrieve the thermometer back up from the sea floor to get the daily temperature. Courtesy Jennette’s Pier 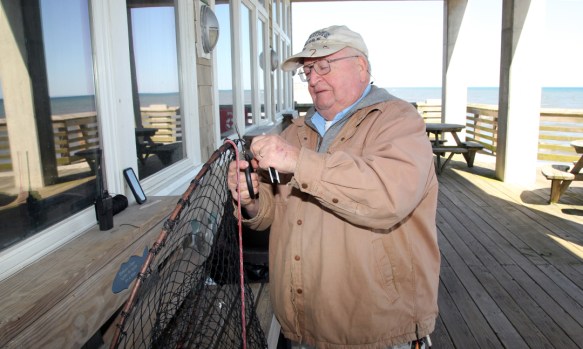 While listening to some tunes on his phone, Mike Preziotti uses a net needle to repair one of the pier’s landing nets, a job he’s done for 10-plus years. Courtesy Jennette’s Pier 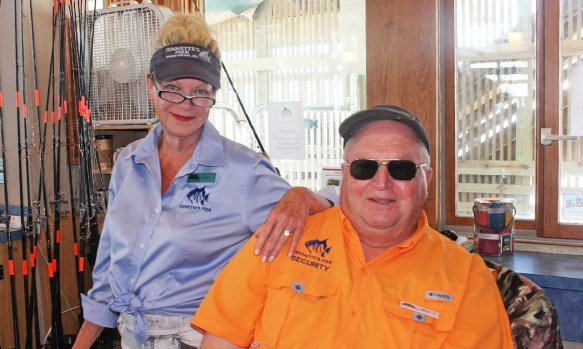 Mike Preziotti arrives before sunrise when it’s still calm at the oceanfront – no fishermen, beach combers or surfers just yet. For the past decade, “Mike P.” has kept busy as head security guard at Jennette’s Pier, a role that suits him well.

An avid fisherman and retired Norfolk, Va. firefighter, Mike P. has become a fixture around Jennette’s Pier. You’ll see him behind the counter with trusted co-worker Lynn Fox or cruising the pier in the royal blue and white electric golf cart complete with shark fin on top.

He’ll have on a Columbia fishing shirt, khaki shorts, ball cap and dark sunglasses with a bundle of keys dangling from his belt. To save on calories, he drinks Diet Pepsi and munches on celery in lieu of his favorite snack – Twinkies.

On summer days, Mike P. first unlocks everything, then checks the ocean temperature before fielding phone calls about what’s biting. He speaks to all the anglers as they file through the pier house with rods bristling and coolers leaking.

On good days, Mike P. may get to fish a little before work, but on others he’s enforcing pier rules or warning surfers who come too close to the pilings.

No matter what the task, you can always count on Mike P.

He’s proud of the speckled trout and big red drum he’s caught on his days off over the years. The former Oceanview native also commercial fished and drove a head boat out of Rudee’s Inlet back in the 1990s.

He often mends the black nylon mesh pier landing nets with a net needle and ties foolproof knots on their lines. Mike P. also excels at computers and loves taking his “mermaid” Corinne out for meals. The Preziottis reside in Point Harbor with their blonde lab Jack.