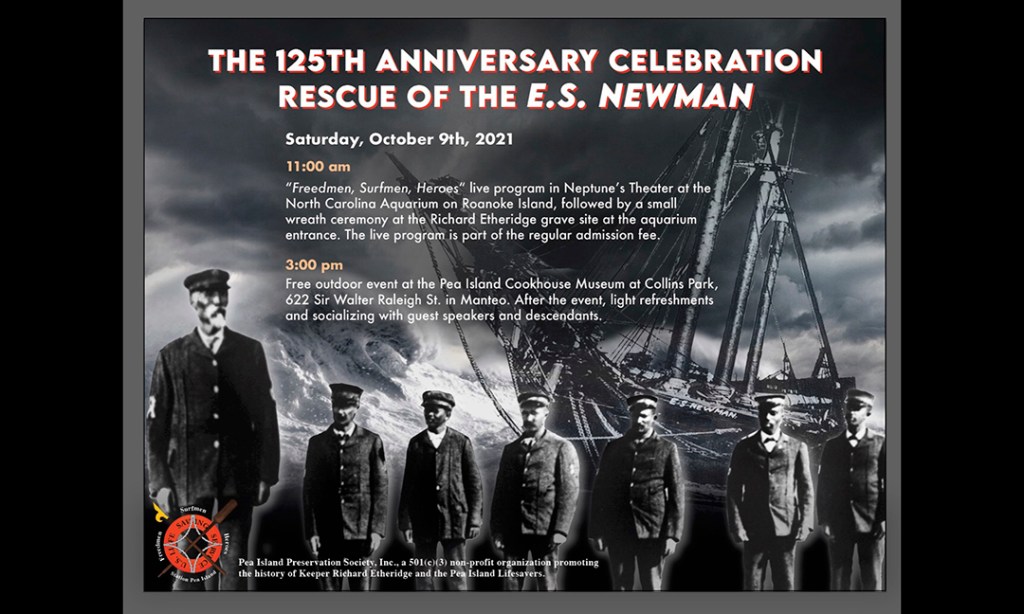 The Pea Island Preservation Society, Inc., (PIPSI) has announced two events being held on Saturday, October 9, 2021 to celebrate the 125th anniversary of the rescue of the E.S. Newman by Keeper Richard Etheridge and the Pea Island Lifesavers. Both are to encourage people who are visiting or who live on the Outer Banks to remember the heroic October 11, 1896 rescue of the shipwrecked vessel during hurricane conditions, a rescue known as one of the most daring in the history of the United States Life-Saving Service (USLSS). Keeper Etheridge, who was once enslaved on Roanoke Island, was the nation’s first black keeper of USLSS station Pea Island, the only station in the service with an all-black crew.

On Saturday afternoon at the Pea Island Cookhouse Museum, PIPSI will have a free outdoor program at 3 p.m. to remember the rescue of the E.S. Newman, with the porch of the museum being used as the stage. David Wright Falade, who co-authored the book Fire on the Beach: Recovering the Lost Story of Richard Etheridge and the Pea Island Lifesavers, will be the keynote speaker for the 3 p.m. program. Wright Falade is currently a professor of English at the University of Illinois.

His novel, Black Cloud Rising, a historical novel that takes readers back to an extraordinary moment when enslaved men and women were shedding their bonds and embracing their freedom, will be available on February 8, 2022 and has already been excerpted in the New Yorker. One of the main characters in the book is Sergeant Richard Etheridge, a character created based on Etheridge’s real-life service in the US Colored Troops during the Civil War. Wright Falade has written for the New Yorker, the Village Voice, the Southern Review and more.

Captain Matthew J. Baer, the US Coast Guard Commander of Sector North Carolina, will also speak at the 3 p.m. event. Daniel Gardiner, the great grandson of the captain of the shipwrecked E.S. Newman, and several descendants of the Pea Island Lifesavers are also expected to attend.  Outside seating for the event will be available on a first come first serve basis. People are also encouraged to bring their own outdoor chairs or blankets, as there is plenty of outdoor space at Collins Park. Following the program, everyone is encouraged to socialize and light refreshments will be served. The inside of the Cookhouse Museum will also be opened to visitors. However, those who wish to visit the inside of the museum will be required to wear face masks and the number of people allowed inside at one time will be monitored.

The Cookhouse Museum is a small museum in the original cookhouse that was at the Pea Island station, the building where the keeper and surfmen would cook and eat their meals. The museum contains artifacts, photographs, paintings and other images honoring the history of the Pea Island station. It also contains the original signboard of the October 11, 1896, shipwrecked E.S. Newman. Also, several outdoor Wayside Exhibits are at the site that tell the history of Keeper Richard Etheridge and the Pea Island Lifesavers. In addition, a life-sized bronze statue of Etheridge is at the roundabout across the street and the Herbert M. Collins Boathouse sits next to the museum. Collins served at the station the duration of World War II and helped to decommission it in March 1947.

Prior to the afternoon program, which is the main event, on Saturday morning at 11 a.m., PIPSI will also again present the live program Freedmen, Surfmen, Heroes in Neptune’s Theater at the North Carolina Aquarium on Roanoke Island. This popular program is normally presented at the aquarium during the summer months, but is again being presented on Saturday morning in remembrance of the E.S. Newman rescue. The presenters – Darrell Collins, Joan Collins and Coquetta Brooks – are each connected to the Pea Island station through family members who served there and tell the inspiring story of Etheridge and his crew using vivid imagery and sound effects, while encouraging audience participation throughout. The special 11 a.m. program will be included as part of the regular admission fee to the aquarium. Immediately following the program, a wreath will be placed at the Etheridge’s gravesite, which is located outside at the front entrance. All persons visiting the aquarium are required to wear face masks while inside the building.

Remembering the October 11, 1896, rescue of the E.S. Newman also is especially important given that Etheridge and his crew never lived to know of or receive any special recognition for their daring rescue. Unlike men at other lifesaving stations who received special awards, the men at station Pea Island never had an opportunity to proudly wear medals on their chests. In March 1996, Keeper Richard Etheridge and the Pea Island Lifesavers were posthumously awarded a Gold Lifesaving Medal by the US Coast Guard for the E.S. Newman rescue. But by then, some 100 years later, each had long died. The 125th Anniversary Celebration is the perfect time to remember these forgotten heroes. So please plan to attend both or at least one of these special events.

The mission of PIPSI is to make the inspiring story of Keeper Richard Etheridge and the Pea Island Lifesavers broadly known and recognized as a compelling part of the history of Roanoke Island and the Outer Banks. PIPSI manages and operates the Pea Island Cookhouse Museum and promotes the history of Etheridge and the Pea Island station through its Freedmen, Surfmen, Heroes education initiative. The Cookhouse Museum at Collins Park is located at 622 Sir Walter Raleigh Street in Manteo. For more information, see www.peaislandpreservationsociety.com  or call 252-573-8332.

The North Carolina Aquarium on Roanoke Island is located in Manteo at 374 Airport Road. The aquarium is accredited by the Association of Zoos and Aquariums and is dedicated to the mission of “Inspiring appreciation and conservation of our aquatic environments.” For more information, see ncaquariums.com/roanoke-island or call 252-475-2300.