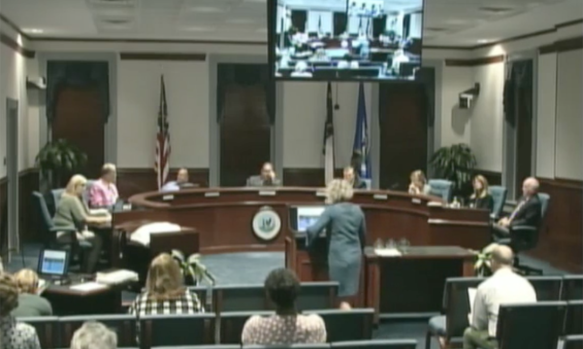 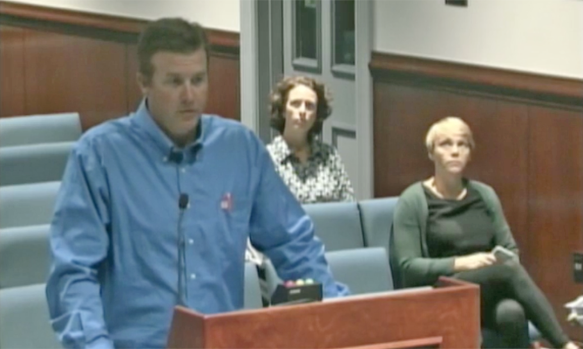 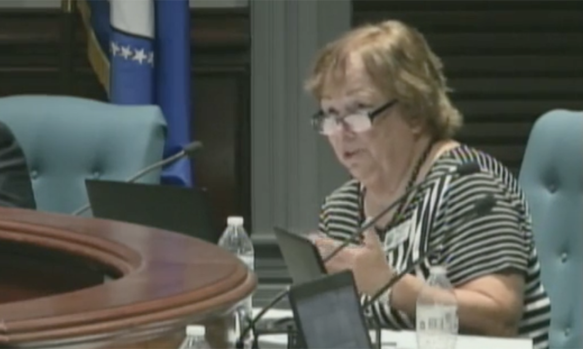 Commissioner Kitty Etheridge urges caution in allowing more growth in the county until the schools can adequately meet the needs of the community. Currituck meeting screenshot 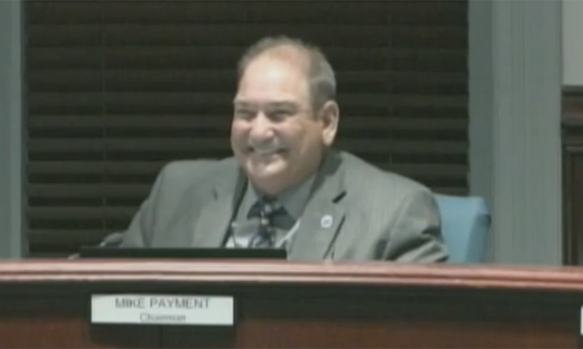 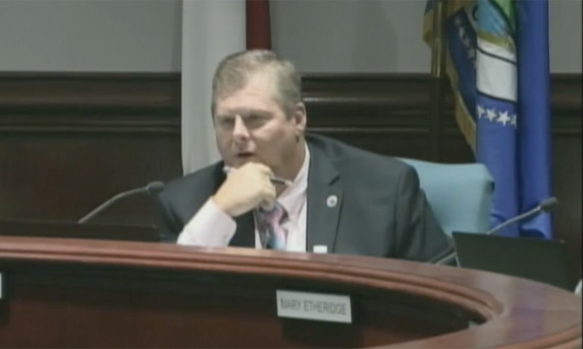 Commissioner Bob White addresses accusations of conflict of interest within the Board of Commissioners. Currituck meeting screenshot

Currituck commissioners spent many hours discussing growth plans for the county at the board’s October 4 regular meeting. Four public hearings came before the board for decisions.

The first was a request from Outer Banks Ventures to amend the future land use classification map from conservation to full service designation for a 36-acre property in Corolla at the southern end of Monterey Shores on Malia Drive, adjacent to the Timbuck II Shopping Center. The request comes following a recently approved US Army Corps of Engineers wetland delineation, which increases the amount of full service acreage at the property from .40 to 12.22. The remaining 23.57 acres will remain in conservation.

The attorney representing Outer Banks Ventures made it clear that the board was not approving a development; they were voting to amend the land use plan and then at a later date a request for permits will come. The long-term plan for the space, if approved, is to build a restaurant on the Currituck Sound. “It would be the only place on the Currituck Outer Banks where you have a restaurant overlooking the sound that you can access by boat,” he said.

Commissioner Bob White moved to approve, which was accepted unanimously.

The second public hearing was a request from Allied Properties for Windswept Pines in Moyock to move on to phase three of development, requiring an amendment for rezoning of the commercial mixed residential district. Phase three would add an additional 14 residential lots on the 15.55-acre parcel, which includes 7.51-acres of open space, bringing the total Windswept Pines residential lots to 73 over almost 67 acres. Two years ago, the application to begin phase three was denied because of inadequate public facilities, namely that Moyock Elementary School was already beyond capacity.

The Moyock Elementary School expansion project, which will allow a capacity of 750 students, compared to the current 529 capacity, is expected to be completed in August 2023. Nonetheless, commissioners had reservations in approving the Windswept Pines request in the event of a building delay of the elementary school. However, noted commissioner Kevin McCord, 14 lots is only expected to generate about three students.

Developer Marc Bissell, representing Allied Properties, said, “We’re just doing rezoning right now. We’ll have to come back for permitting later.” He estimated it would be three or four months until Allied Properties came back to request permits.

Commissioner Kitty Etheridge made a motion to table the item until the county meets with the builder and the school board, set for later on in October. “We don’t have all the information we need to make a good decision,” agreed Selina Jarvis.

However, the other commissioners were ready to hold the vote. The amendment was approved, 5-1, with Etheridge dissenting.

The third public hearing involved a request from Sam Miller of Miller Homes and Building for a conventional rezoning of 162.5 acres in Barco from Agriculture and General Business to Single-Family Residential-Mainland, leaving 2.5 acres General Business.

With the current zoning, Miller could build 62 lots. His plan is to develop about 80 lots and retain the wetland area. However, with a conventional – often called straight – rezoning, it is illegal to impose conditions, so while the applicant has said he will develop 80 lots and retain the wetland area, “you can’t hold a developer to anything with a straight rezoning request,” said Planning Board presenter Tammy Glave.

The planning staff recommended that Miller resubmit his request as conditional zoning application plan. Miller defended his request, mentioning the last development he built using straight rezoning – Laurel Woods Estates – as an example of his quality standard. “Let’s keep it simple and do what works . . . we don’t necessary need conditional zoning. If someone has a real concern [with the development], but for the fourth meeting, I’ve yet to get something,” he said.

When asked by Chairman Mike Payment of the benefits for straight rezoning, Miller replied, “It comes down to time and money.” Because Miller plans to build in phases, a conditional rezoning will require more approval at each step of the process.

Again, commissioners Jarvis and Etheridge urged caution. “Part of the problem with rushing something is that we have schools over capacity, at capacity . . . striking while the iron is hot is not prudent. A buffer is to me a good way to make sure that you make sure you protect the future value of what will be developed to the north and south of [the property],” said Jarvis.

Payment made a motion to deny; motion carried 4-2.

The last public hearing was a “housekeeping” amendment that clarified language in the ordinances and according the North Carolina 160D requirements. The amendments were approved.

During the reports and presentations of the meetings, Tameron Kugler, manager of travel and tourism in Currituck, shared with the board the awards given to the county at the North Carolina Travel Industry Association Leadership Conference. The county won three awards, including the Best of Show award out of 80 entries. “I want to lift my team up, they’re the ones that make this all possible. I’m very, very proud of my team, my county and the Board of Commissioners who support us every step of the way,” Kugler said.

Etheridge, in her report, proposed a temporary modification to the county dress code to allow employees to participate in the Operation Santa fundraiser. Employees are encouraged to wear blue jeans starting this Friday for a fee of $2, for a total of $20 over the ten-week fundraiser, benefitting local children in Currituck County.

Next, commissioner Bob White addressed the social media criticism he has received that claims that his personal business in the wild horse tour industry and his position as a commissioner is a conflict of interest. White listed the professional backgrounds of the other commissioners, as well as his own experience in hotel management, restaurants, beach shops and more. “We all bring different things to the board. It should represent all types of industries in the county. It’s expected that you would do business and give back through a form of service on this board,” he said. “I want to set the record straight about what is and is not a conflict of interest. For us to be up here and own a business is not a conflict of interest.” He then explained how commissioners respond when there is an actual or perceived conflict of interest by excusing themselves from a vote, asking the county attorney for counsel or voluntarily excusing themselves from the room so the other commissioners can feel comfortable to discuss and vote.