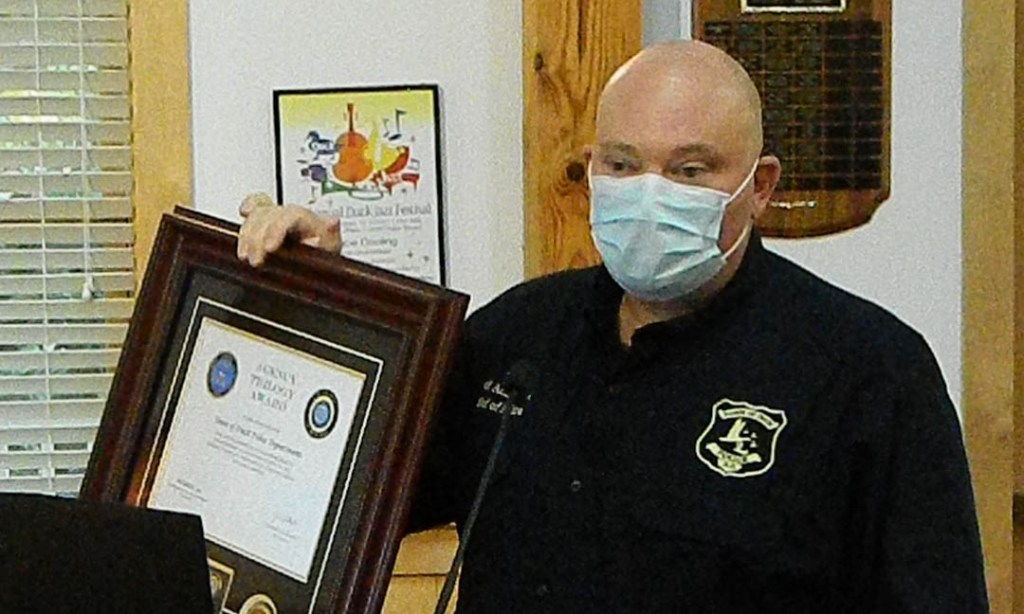 Duck Town Council during its October 6 regular session meeting, with one member absent due to a family death, approved a CAMA Land Use Plan update, agreed to extend COVID-19 restriction accommodations for businesses, discussed changes to the Waste Management trash schedule and learned about a recent prestigious police department award.

Presented to those agencies in which all command staff members complete multi-day training programs in the Supervisor, Command and Executive Leadership Institutes, the cutting-edge FBI-LEEDA Trilogy curriculum is especially designed for first-line supervisors and middle managers with the goal of enhancing leadership competencies.

Duck Police Department, according to Ackerman, is the second agency in North Carolina and one of only 24 in the United States to receive such an award.

“This is a big deal for us,” said Ackerman. “Because this training was from an elite group of trendsetters.”

He went on to add that, while some departments designate command staff as only the chief and deputy chief, in Duck it includes sergeant and above.

According to the FBI-Law Enforcement Executive Development Association website, the private, non-profit organization is separate from and not part of the Federal Bureau of Investigation.

Taking up the first item of business, council revisited its comprehensive and land use plan.

Following an August 5, 2020, resolution in which council approved a draft, the CLUP document then underwent 14 months of formal review by the N.C. Division of Coastal Management and other state agencies.

According to community development director Joe Heard, the review did not result in any guideline amendments nor see any substantive changes to the CLUP previously approved by the Planning Board and Town Council. There were, however, more than a hundred minor amendments to the document.

“Most comments deal with such things as document organization,” explained Heard. “Other changes include requests for additional background information and to identify which recommendations are policies and which are implementation actions. The revised CLUP also clarified that it is to be used as a guideline. Before final review and certification by the secretary of the N.C. Coastal Resources Commission, the revised CLUP now requires review and re-adoption by Town Council.”

During discussion on the document, it was pointed out that there is no defined time for CLUP reviews. The average span for most communities is to take a look after about five years. The last Duck review was 15 years ago.

At the end of discussion, council voted 4-0 to approve the revised comprehensive and land use plan.

With an order offering temporary accommodations to businesses subject to COVID-19 restrictions set to expire November 30, council held a brief discussion on what steps, if any, should come next.

The order approved on May 19 allows businesses to temporarily use tents, outdoor seating and displays, additional signage and waives fees. Currently there are no state, county or town restrictions that limit the capacity or operations of businesses due to COVID-19. The evening’s discussion focused on whether or not to extend the special provisions granted for businesses dealing with COVID-related restrictions or instead go back to the business as usual status in place prior to the pandemic.

In an effort to help businesses plan for the coming holiday season, council agreed to extend May 19 provisions until the middle of January. On the recommendation of town manager Drew Havens, council settled on a Sunday, January 16 date and asked Heard to draft an extension for review.

When the 2022 beach renourishment project bids were opened, officials were a bit surprised to see that the numbers were lower than expected. The lower project cost opened the door for saving money on the project or adding additional sand within the original budget for the project.

“This sounds like a great opportunity to put more sand on beach at no extra cost,” said Mayor Don Kingston.

As expected, the vote to add 69,000 cy of sand to the project passed with unanimous approval.

Related to the beach renourishment project, council authorized the issuance of four separate special obligation bonds required in order to obtain the financing needed for the beach renourishment project. According to town documents the interest rate will be 1.74 percent for a five-year bond and 1.54 percent for a one-year, variable rate bond. The rate for a FEMA bond will change at each renewal but is subject to a market dependent cap expected to be below 2 percent.

In a separate action, similar to the one for the 2017 project, an interlocal agreement among Dare County and the Towns of Duck, Kill Devil Hills, Kitty Hawk and Southern Shores was approved for the execution and administration of the beach nourishment construction contract.

According to Cross, Fred Smith Company at $188,920 and Hatchell Concrete at $218,500 were the only bids submitted with Barnhill Contracting, Whitehurst Sand and H&H Land Development declining to bid. Current workload and limited labor forces were indicated as reasons to opt out.

Cross explained that the project area is in great need of work and includes removal and reconstruction of the multi-use path with 707 linear feet of permeable concrete and 313 linear feet of conventional concrete. The creation of shallow roadside swales for drainage away from the path and road surface are also part of the project.

Faced with working only with as much as is budgeted, funding some permeable concrete with the remaining conventional to be completed next fiscal year, adjust funding to complete the originally designed for the $188,920 or not awarding a bid and holding off on any work, council decided to hold off on any decision until November, when bids on another improvement project are due and a comparison can be made.

Duck Town Council meets again November 3, which is within the 45 days Duck has to respond to the Duck Trail improvement bids.

During a lengthy discussion on the town’s current trash pick-up schedule, Waste Management officials advised that a majority of the failures in the company’s performance are due to workforce shortages, truck failures and several associated parts shortages.

Earlier this year, the sanitation company requested a schedule change that split Duck into north and south territories over a two day schedule instead of one. In addition to an increase in tonnage, dealing with labor shortages and high traffic volumes played an important part in the schedule change.

Although a survey with 367 responses indicated support for the proposed schedule change, council has since received more than two dozen public comments opposing the continuation of the split route schedule. The goal was to provide improved service reliability and shorter recovery times with an overall decrease in missed collections.

An evaluation for the new schedule revealed, however, that a similar number of carryover days occurred as compared to the previous summer.

Councilman Sandy Whitman advised that most of the comments he received indicated residents want it all done on one day.

According to Cross, some of the problems Duck is facing are not unique to Duck, adding that labor shortages are an issue almost everywhere. She went on to say that town staff have talked with Waste Management weekly about any issues and about developing a more efficient routing system, such as routing using only right turns to improve time, fuel efficiency and safety. An earlier start time was also discussed.

As the discussion came to a close, Mayor Don Kingston said he didn’t think anybody would be opposed to an earlier start time, like 5:30 or 6 a.m., and his suggestion was that when feasible, the schedule should go back to one day in the off season with recycling still on Mondays.

Other business for the evening included an announcement from Heard that NCDOT has completed its review of grant requests and has included the Duck request for further review. Heard said that usually indicates that the money is coming but the award will not be until December or January. While good news that money will be coming, the timing will make it impossible to include any of the associated projects in this year.

Heard pointed out, however, that the town was looking at around a $650,000 match on just two of the associated projects. With the BRIC grant, Duck will realize a $410,000 savings, which means a new road and stormwater management for $240,000.

The next step is to contact the lending partners and request an extension to enable the projects to take place next year, probably mid-October 2022.

The next scheduled Duck Town Council meeting will be a regular session meeting at 6 p.m. on Wednesday, November 3.