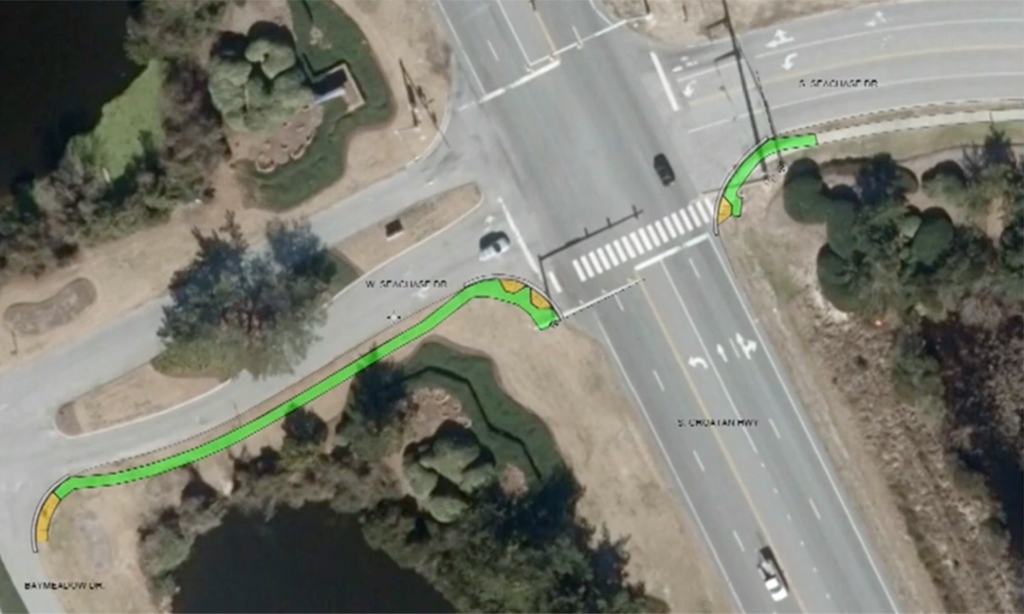 Public Works director Eric Claussen gave a presentation about the results of an assessment of a Seachase Drive sidewalk extension project from Croatan Highway to Baymeadow Drive on the southside of Seachase Drive. According to the staff report, “a portion of the sidewalk on the east side of the highway will need to be reconstructed and curbing added so that the pedestrian path is better delineated and protected at the intersection.”  The project will cost an estimated $35,000. Another area of concern for pedestrians is the crosswalk at the intersection of S. Virginia Dare Trail and Seachase Drive because of limited visibility due to the curve in the road. Public Works suggested additional lighted, pushbutton sign like the one installed by NDOT at the intersections of Bonnett Street and the Jennette’s Pier crosswalk. The cost of this crosswalk is $10,000. 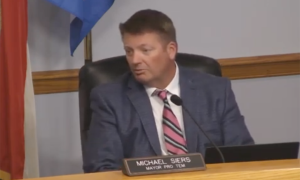 Moving on, commissioner Webb Fuller explained the big picture for the Harvey Public Sound site, located at 6912 South Croatan Highway at milepost 16: “The whole concept is to create sort of a what I’m calling a wind-water recreational area where there are a number of different wind activities, non-motorized. I think is important for the town. For one thing it would take a little bit of pressure off Jockey’s Ridge . . . it’ll provide a benefit to our community to both locals as well as tourists.”

After a closed session, commissioners reconvened for commissioners’ reports. Commissioner Renee Cahoon mentioned a number of issues in the town: the excessive speed on Seachase Drive, the continued noise violations at the “party house” at 6937 S. Virginia Dare Trail and the trash problems on Virginia Dare Trail north of Gray Eagle. “We’ve got to get trash under control,” she said, also mentioning the problem with carts being rolled out by service companies a full 24 hours before pick-up, contrary to the ordinance which states that carts are to be rolled out the evening before a morning pick-up.

Cahoon also called attention to the continued lack of concern for traffic and pedestrian laws. “People coming here this summer do not observe traffic rules – they don’t observe the bike path ordinances. I have occasioned over the past weekend to observe golf carts on the beach road and on the multi-use path that aren’t even legal to be on either one . . . We seem to have an awful lot of people that are coming to the area that don’t care about the laws of North Carolina, they don’t care about the ordinances of the town, and they don’t care about being good citizens and stopping at crosswalks.”

According to Cahoon, visitors are not the only offenders. Locals, too, are violating traffic laws. “I had hoped that we were a better community and our visitors were better than that and it appears that this summer has brought out the worst in people,” she said.