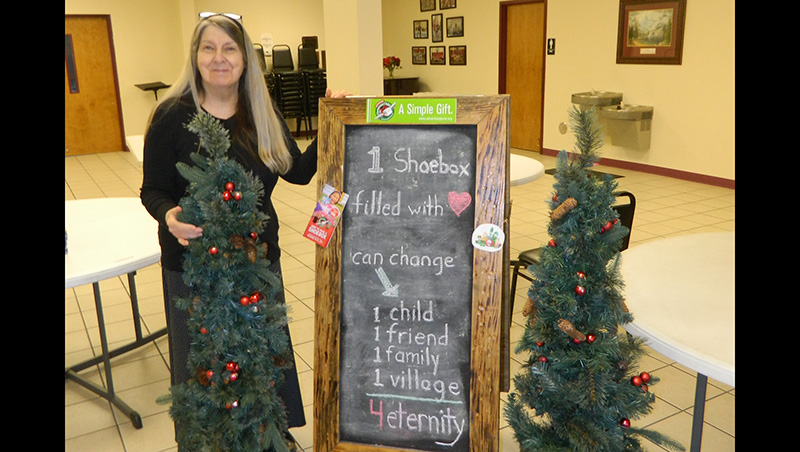 Volunteers at Manteo Baptist Church, located on the corner of US Hwy 64 and Ananias Dare Street in Manteo, are once again collecting Operation Christmas Child shoeboxes.

What originally started in 1990 by a couple in Wales as a truck filled delivery of medical supplies, food, clothing and gifts to Romania following the country’s violent anti-Communist revolution, the program merged with Samaritan’s Purse, a nondenominational evangelical Christian organization, in 1993 and today is the largest Christmas project of its kind in the world.

Promoted as a tangible way of demonstrating God’s love for his children, shoeboxes are filled with small toy gifts, hygiene items and school supplies for worldwide distribution. Due to customs issues, any liquids, toothpaste, breakables, aerosols and candy of any kind are prohibited.

According to the Operation Christmas Child website, gift boxes are sent outside the United States to children affected by war, poverty, natural disaster, famine and disease, as well as to children living on Native American reservations in the U.S., with some 188 million shoeboxes delivered to children in more than 170 countries and territories.

This year, as in years past, Manteo Baptist Church is one of almost 5,000 shoebox collection point locations offering carry in or curbside drop-off services with the following schedule: 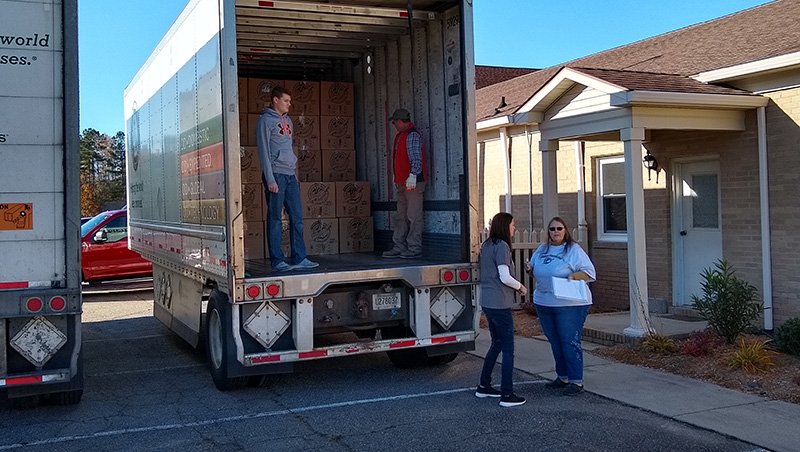 Workers load a truck with Operation Christmas Child shoeboxes at an Elizabeth City collection point for the trip to a central distribution center. File photo

“When people come by to drop off boxes they can remain in an outside area for drop off,” said Manteo Baptist Church administrative assistant Lois Givans. “They can remain in their car if they like while volunteers come to the driver window and take their information. We hope to ensure the safest possible drop off procedure while still fulfilling the needs of the children around the world.”

Although preprinted shoeboxes are available for a girl or a boy in each of three age categories (2–4, 5–9 or 10–14), any average-size cardboard or plastic shoebox would do. For those electing to wrap boxes, the box and lid should be covered separately.

Each box should be filled with about a dozen items at an average cost of $9 to $10. Suggested items include stuffed animals and any number of small toys, hygiene items and school supplies. According to Samaritan’s Purse, shoe box gifts go to needy children around the world and for some it is the first gift they have ever received.

Families preparing shoe boxes are also encouraged to include a personal note and photo and to pray for the child who will receive their gift. Suggested prayers are:
– The family to also be receptive to the Good News of Jesus Christ.
– The pastor of the church who delivers your shoebox gift.
– The community to be transformed by the Gospel.

According to Samaritan’s Purse, shoebox gifts will be shipped out to children in some of the hardest-to-reach countries around the world by the middle of December from processing centers in Boone, Charlotte, Atlanta, Baltimore, Dallas, Denver, Minneapolis, or Orange County, Calif.

After receiving shoebox gifts, many boys and girls are then invited to enroll in discipleship programs with local ministry partners. Depending on the distance they must travel, some shoeboxes are delivered by Christmas while others may not clear customs in receiving countries until spring. In addition, when gifts must be transported to rural areas along poor road conditions, distributions could typically occur from late December through spring each year.

For more information about the Manteo Baptist Church Operation Christmas Child program, call the church office between 10 a.m. and 2 p.m. Monday through Friday at 252-473-2840 or send an email to office@manteobaptist.com.