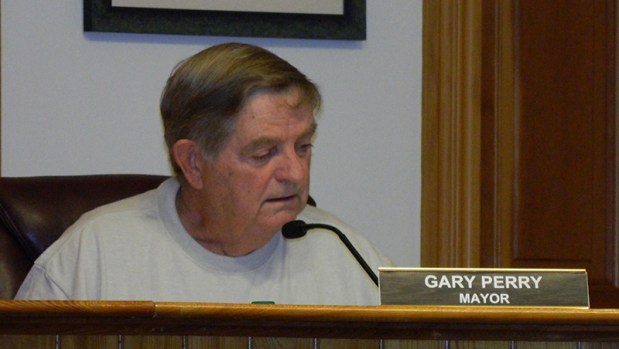 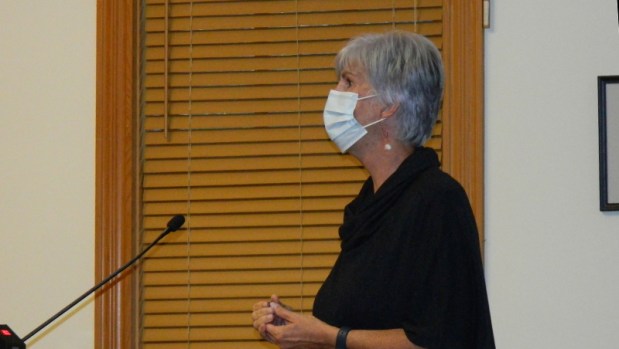 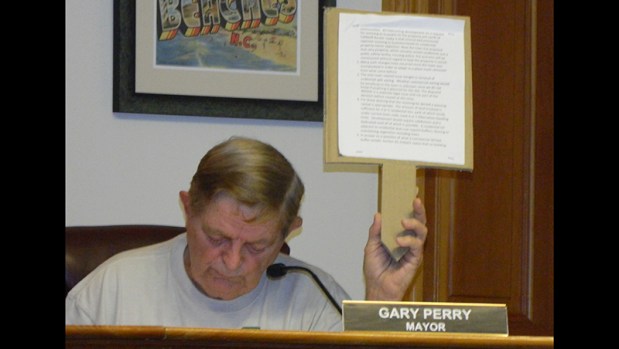 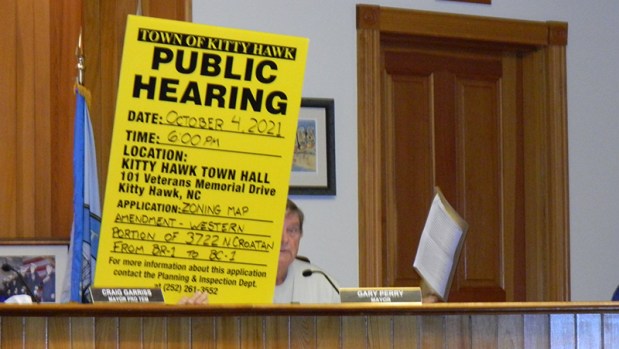 According to Osborne, CPA with the Nags Head accounting, auditing and bookkeeping firm of Dowdy and Osborne, LLP, the town received the best and highest opinion rating available on its June 30 Fiscal Year 20-21 audit, which indicates that the record keeping and accounting documents are in order.

Of particular interest to a larger than normal crowd attending the meeting, council discussed a zoning request to correct an existing split-zoning situation for 3722 North Croatan Highway.

A public hearing took place at the October 4 meeting with several residents voicing opposition to rezoning a portion of the property to BC-1. After area residents requested more time to learn more about the change and to alert other nearby residents, the matter was tabled.

As an introduction to the issue, Mayor Gary Perry explained that Kitty Hawk was incorporated in 1981 with no real zoning in place. Zoning became a heated subject with many residents just wanting to be left alone and it wasn’t until 1986 when zoning of the town occurred, only to have the entire planning board resign in protest of what and how the zoning map would be drawn. Although the results did have flaws, over time changes have taken place to make corrections and better reflect current conditions.

Other changes include providing notices of zoning changes.

“When I came onto this council 16 years ago,” Perry explained, “the only requirement of public hearing notice was publication in the local paper, notice on the town bulletin board, a published agenda item and an 8 by 11-paper notice, visibly posted on the affected property.”

Today, due to council actions and changes to North Carolina law, there is more visible signage and notification is mailed to adjacent property owners. In this case, notice was mailed to 17 separate adjacent property owners, notice of the hearing was also published twice in The Coastland Times, posted on the town website and the agenda posted on town hall bulletin board and electronically mailed to all persons or groups listed on the town’s web notification site.

Perry then held up a large yellow with black lettering sign saying two such signs were posted on the property under consideration, adding that council has continually gone beyond the minimum notice requirements in an effort to obtain the maximum public input for any issue.

Reading from a prepared statement, Perry then advised residents requesting the rezoning be denied to consider that the tract of land involved is large enough for four or five residential lots, each of which could, under current town code also have four or five accessory dwelling units. Any such development would require a dedicated road with no buffers such as fencing or vegetation. On the other hand, a commercial property requires a 50 foot setback, which means no building, parking areas or trash collection areas would be located near the boundaries of any residential district and a 10 foot wide vegetated buffer between commercial and residential zones.

After pointing out that the only issue for council is the removal of an undesired split zoning, Jeff Pruitt, Craig Garriss and other council members added that the zoning issue should have been corrected a long time ago and is not something that should be passed on to a future council.

At the end of discussion, a vote to approve rezoning the property at 3722 North Croatan Highway to BC-1 passed with unanimous support.

After the meeting, attorney James R. Gilreath Jr., representing the applicant, advised that there are no current plans to develop the property and the rezoning action was simply an administrative step to have consistent zoning for the property.

In other business for the evening, council scheduled two public hearings for the December 6 meeting. One is for a zoning map amendment to rezone 4907, 4911, 4915 and 4919 North Croatan Highway from BR-1 to MS-1 in order to accommodate a future police station, and the other is for a zoning text amendment to match the maximum lot coverage language from the MS-1 district with the language in the Beach Commercial zoning districts allowing a maximum lot coverage physical area of 72 percent provided permeable pavement is used on site.

Also approved within the consent agenda were council minutes from September 7 and October 4 meetings, budget amendments recognizing a $500 donation from Dusty Rhoads HVAC Inc. and a $50 donation from Pat and Barbara Wilkerson to the Kitty Hawk Police Department for future purchases of automated external defibrillator supplies and a $5,000 grant received from the Government Education Access Channels Committee for upgrading the audio/video equipment in the Smith Room.

The next Kitty Hawk Town Council meeting is set for 6 p.m. on Monday, December 6.