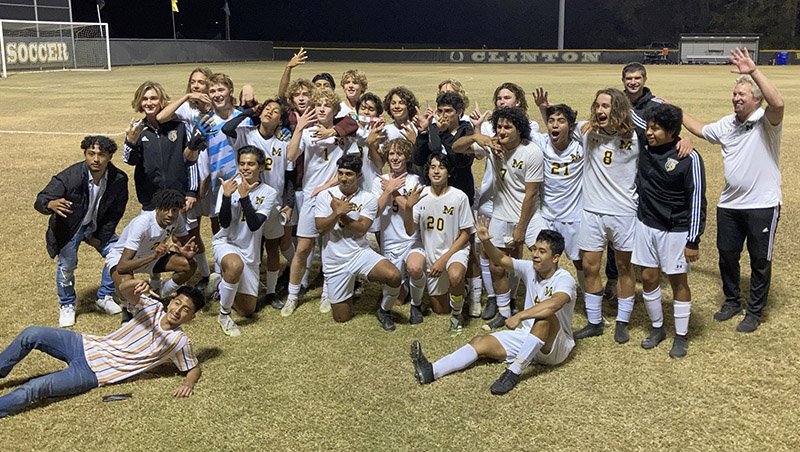 Manteo High School boys’ soccer team came from behind for a 2-1 overtime win at Clinton High School Thursday in a NCHSAA 2A fourth round playoff game.

In overtime play, Oscar Rivera added another goal to Manteo scoreboard, which put the Redskins up 2-1.

The win improves Manteo’s record to 14-3-1 for the season and earned the Redskins a trip to next 2A Regional Championship round.

In 3A action, number one seed First Flight was clipped 2-1 in its fourth round contest against number 21 Western Alamance. Western Alamance (now 17-5-1) jumped to a 2-0 lead before the Nighthawks could respond with a single goal with just under five minutes left.

Thursday’s loss ends an outstanding 15-2-1 season for First Flight. The Nighthawks ended the regular season as conference champions with a 11-0-1 record. Advancing through the state playoffs, the Kill Devil Hills team defeated Currituck County 3-0 on Oct. 27, won their Nov. 1 home playoff game against Rocky Mount 9-0, toppled J.H. Rose on Nov. 4 by a score of 2-1 and claimed a home field victory over the Williams (Burlington) Bulldogs Nov. 8.

Western Alamance will now face Lee County on Nov. 16. The winner of that match will go up against the winner of the Concord vs. Hickory game for the state championship.

Manteo’s championship march included a 2-1 November 1 playoff win over Lenoir followed by another 2-1 win over the Red Springs Red Devils on November 5. Then, November 8, Manteo pulled out a 6-4 double OT win against James Kenan.