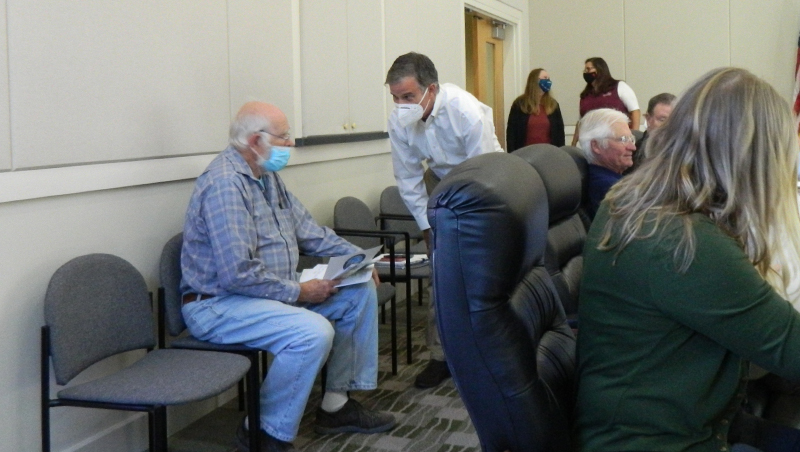 Tourism Board executive director Lee Nettles chats with Page Wiencek, left, prior to the November 18 Dare County Tourism Board meeting. One of the Thursday agenda items included a response to concerns Wiencek had in October about prominently displayed offensive materials at the Event Site. Philip S. Ruckle Jr. photo

At the October board meeting during the public comment session, Page Wiencek voiced a concern that in September one Outer Banks Jeep Invasion vendor at the Event Site in Nags Head had prominently displayed materials with an offensive four letter word. He explained that while the event was promoted as a family affair, the display was anything but family friendly.

Taking up Old Business at Thursday’s meeting, Tourism Board executive director Lee Nettles advised that there had been a written response from Outer Banks Jeep Invasion co-coordinator Steve House.

In addition to expressing thanks to the Tourism Board for helping with a successful fundraising event with more than 38 vendors that raised $38,000, which generated several hundred pounds of food for Currituck and Dare food pantries and provided an economic boost to the community, House provided additional details for the event situation Wiencek talked about.

According to House’s letter, before and after Wiencek approached organizers at the September event, that particular vendor was asked on at least three occasions to not display the material. Each time, the offensive material was taken down and then later displayed again. Concerns over the display coupled with the vendor being misrepresented as an audio dealer, Jeep Invasion staff made the decision to not include that vendor at future events.

House concluded his letter with an apology for an unfortunate situation and included notice that Jeep Invasion staff are implementing new guidelines for vendors. Among them are a requirement that vendors provide for approval a list of merchandise to be sold and a current photo of their displays. The application will also include a notice that displaying offensive material will be an automatic dismissal from the event with all registration monies forfeited.

“So basically,” explained Nettles, “the event developer is taking an active role in trying to prevent situations like this from happening in the future since it is not consistent with what they are trying to do.”

When Nettles asked if he had anything to add to the situation, Jay Wheless, legal counsel to the board, replied that he almost hated to: “You may not like what I have to say, but it needs to be said,” advised Wheless.

Reading from his handwritten notes, Wheless advised that it was 50 years ago when the U.S. Supreme Court gave a landmark decision in Cohen v. California that the First Amendment prevented the conviction of Paul Robert Cohen for the crime of disturbing the peace by wearing a jacket during normal business hours displaying similar words in the public corridors of a California courthouse.

“Your Supreme Court held that one man’s vulgarity is another’s lyric,” said Wheless, “and the right to express it, the word, shall not be infringed.”

Wheless concluded his comments pointing out that in this case the event sponsor, and applicant, has promised to undertake their own scrutiny of vendors and it would be better to let them police the words because, as a public authority, attempts at imposing prohibitions against offensive speech could indiscriminately sweep away protected speech.

Other business for the day included a finance report from the Budget and Finance Committee Chair Ervin Bateman, who advised that in September 2021 each class of occupancy except for timeshares saw some growth. With September receipt totals for occupancy and prepared meals totals at $7,059,135.42, that was a $1,093,848.75 (18.34 percent) improvement over prior fiscal year actuals. In addition, gross retail sales collections for the month of August were also up $3,016,215 (22.89 percent) for a 43.19 percent improvement for the calendar year.

Overall, all expenses are currently within budgeted amounts with 93.9 percent of the budgeted revenues for the year received and about 26 percent of budget expenditures spent.

Making a presentation by video link, Jonathan Dail with the accounting firm of Johnson, Mizelle, Straub, and Murphy, LLP advised that the recent 2020-21 fiscal year audit was completed with no irregularities or uncorrected accounting errors found.

Also on hand Thursday was National Park Service Superintendent David Hallac, who advised during public comments that park service visitor numbers are at an all-time high.

“That was a big year for driving destinations after the 9-11 tragedy,” said Hallac. “However, so far this year, at the end of October, Cape Hatteras National Seashore has recorded 2,937,000 visitors. That breaks the all-time visitor record with two more months to go. So I feel pretty confident we will break the 3 million visitor number by the end of the year.” 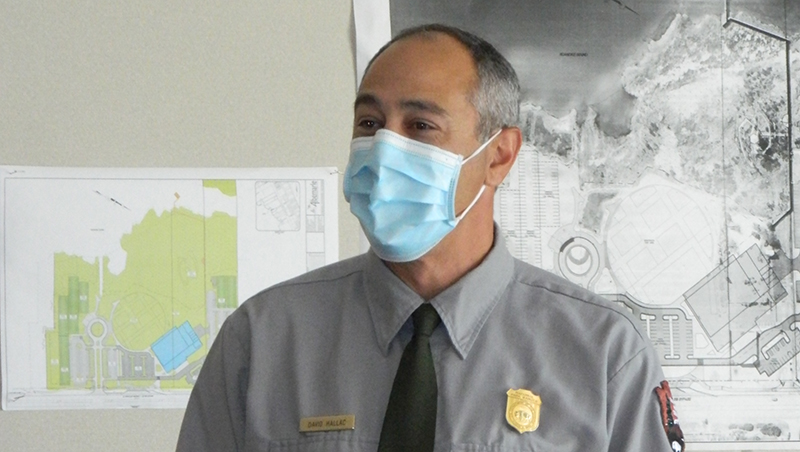 Hallac then added that the number of off road driving permits being issued are also at an all-time record high. He then said with increased visitation comes additional challenges but that a new text messaging system is now in place to help with some of those challenges and 700 members signed up in the first 24 hours. He explained that the message system will be helpful in alerting visitors of events like the recent nor’easter that caused considerable ocean overwash at seven different areas along NC12, left lots of debris to clean up, and forced the closure of NC12 for a while. To register for the message system, text “npsobx” to 333111.

Included in his report was an announcement that all 1,500 seats at the Fort Raleigh National Historic Site Waterside Theatre are being replaced, the 1,000 foot Bonner Pier at the south end of Oregon inlet is open 24-hours with free admission and has 70 parking spaces that are almost always full and work at the Frisco Beach access continues.

With business for the day concluded, board Chair Jeff Pruitt adjourned with an announcement that the next board meeting is scheduled for 9 a.m. on December 16 in the Curtis H. Creech Memorial Boardroom at the Outer Banks Visitors Bureau Administrative Offices in Manteo.