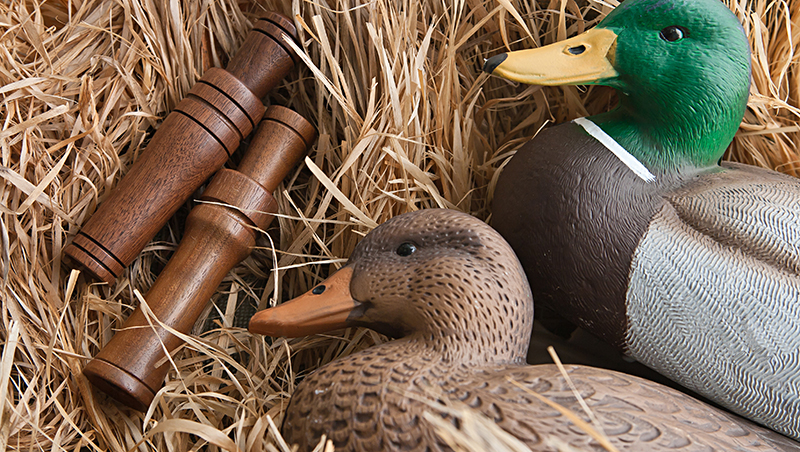 duck decoy with stuffed and some calls

The Kitty Hawk Town Council approved a request that no new permanent duck blinds be allowed within 1,000 yards of a Kitty Hawk municipal boundary at its Monday, January 10 meeting.

Faced with a growing number of blinds “popping up all over” and an increase in complaints from town residents that several of those duck blinds are within close proximity to town shoreline residences, a memorandum of understanding was drafted for presentation to the Dare County Game and Wildlife Commission aimed at finding a balance between the number of permanent blinds, local waterway users and Kitty Hawk shoreline residents.

During discussion it was pointed out that the commission authorizes them without any communication or notice to the town. It was noted also that several blinds have appeared in waterway canals not far from residential homes.

A map of the area shows about two dozen blinds near Kitty Hawk with about that many around Kill Devil Hills. There are currently no blinds in the waters around Colington and Martins Point.

“Fifteen years ago Kitty Hawk lost its representative on the Commission,” said town council member Jeff Pruitt. “Now some of the blinds that were denied have since been approved. We have residents that are afraid to take their daughters out.”

Pruitt said he does not think there is anyone on the commission that knows the Kitty Hawk area and would like to see someone from Kitty Hawk as a representative on it.

The wording of the memorandum of understanding does not place any restrictions on the hunting of waterfowl but does prohibit placement of any new permanent duck blind locations within 1,000 yards from the shoreline of the Town of Kitty Hawk.

Although the commission was created by the Dare County Board of County Commissioners to license permanent or semi-permanent structures to hunt transitory wildfowl in Dare County, Kitty Hawk feels it needs a more active voice in the process.

Another action for the night included adding multifamily dwelling developments with a maximum 14 dwellings per acre as a special use in the Planned Commercial District. According to planning and inspections director Rob Testerman, the change is an attempt to provide smaller, more affordable units and only affects three areas in town.

Council also approved various code changes that expand the areas for recreational vehicles in camping and trailer parks as a special use in the VR-3 district.

Other actions for the night included approval of a retail business site plan review for 5201 North Croatan Highway, condemnation of property located at 4240 North Virginia Dare Trail, authorizing town staff to issue a construction manager at risk RFQ to oversee construction of a new police station/fire/EMS substation, approval of a records retention and disposition schedule, a revised 2022 meeting schedule, approval of the December 6 meeting minutes and a $5,020,429 beach re-nourishment capital project ordinance amendment recognizing the December 14, 2021, proceeds of $88,166 from a special obligation bond issuance.

Council also scheduled two unrelated February 7 public hearings. One for a reduction in the 50-foot separation zone between commercial and residential zones when certain conditions are met and another for a request to amend the definition of lot coverage to allow 500 square feet of pool surface area to be exempted from lot coverage calculations.