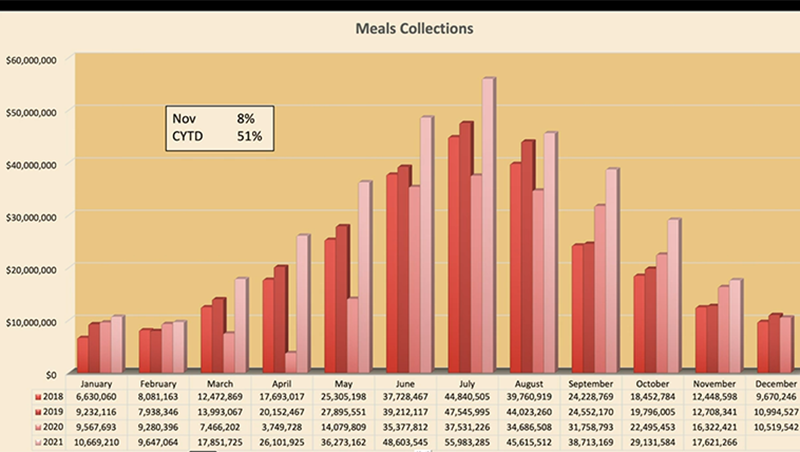 The start of a new year saw four new board members begin new terms on the Dare County Tourism Board at its January 20 meeting in Manteo.

With a full board in place, results of the 2022 Dare County Tourism Board Steering Committee election included Tim Cafferty as chair, Monica Thibodeau as vice chair, Jamie Chisholm as secretary, along with Ervin Bateman as treasurer and Ivy Ingram the assistant treasurer.

Looking at income figures for the closing months of 2021, it was noted that after 17 record-setting months the occupancy collection figures for November show a 33 percent decline. It was, however, a decline that followed extremely high numbers for the previous two years and 2021 year-to-date numbers show an overall 33 percent increase.

Meals, on the other hand, produced an eleventh straight month of increased income collections with an 8 percent increase in receipts.

Among the regular business items for the day was approval of an extension request from the Town of Nags Head for a previously approved $30,000 Tourism Impact Grant.

According to the request, the grant is for redevelopment of a skate park and set to expire later this year on June 30. However, due to its unique design and some of the special construction components, additional time is needed in order to achieve a more integrated design.

Also given unanimous approval was an updated records retention schedule for local government agencies. The update issued by North Carolina Department of Natural and Cultural Resources provides a schedule for public record disposal so as to avoid excessive document accumulation and that valuable records not be mistakenly discarded.

With business for the day completed, the board adjourned until its next meeting at 9 a.m. on February 17.