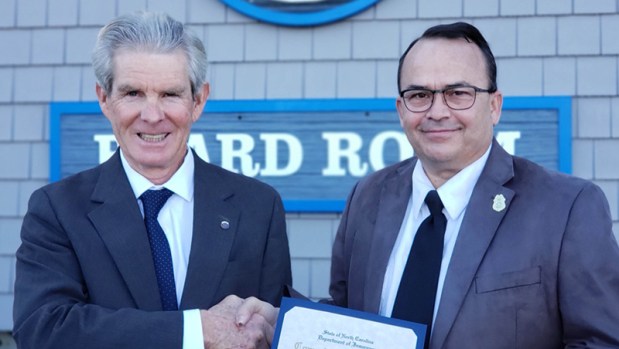 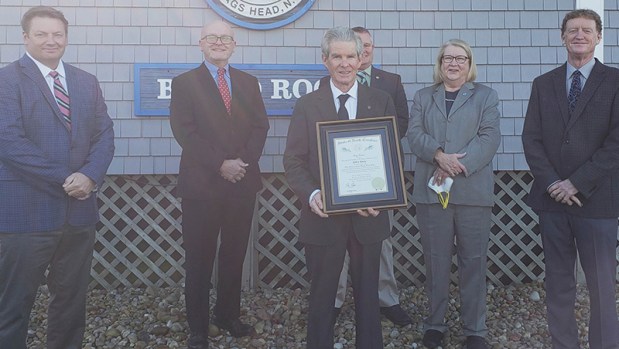 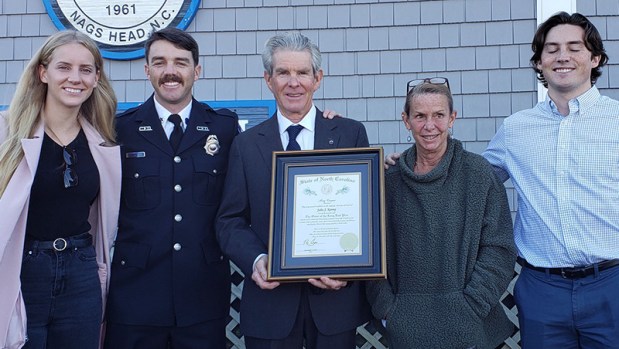 Captain John Kenny is pictured with, left, future daughter-in-law Zoe, son Shawn, wife Kim and son Ian. His two other children, Zack and Kelly, were unable to attend the presentation. All of Kenny’s children have been ocean rescue lifeguards on the Outer Banks at some point and two are currently firefighters. Courtesy Town of Nags Head

“He has been a guardian, a leader, a coach, a mentor, and a friend to every member of our fire department and ocean rescue staff,” said Nags Head Fire Chief Randy Wells. “When our department identified our values of courage, compassion, and commitment, John has lived and displayed all these values. We are here to recognize his long-standing commitment to the Town of Nags Head. Thirty-three years he has been with us as a living example of dedication.”

Kenny was then honored with the North Carolina Department of Insurance Commissioner’s Award signed by Governor Roy Cooper and presented by Deputy State Fire Marshal Brent Heath. “The Commissioners Award … is reserved only for those who have given a lifetime of service to others, given themselves for the benefit and welfare of those around them and that certainly as the Chief has just presented to you is what Mr. Kenny has done.”

Kenny was also presented with a coin from the Office of State Fire Marshal, as it is customary for military and first responders to exchange coins.

Following Heath’s presentation, Nags Head Mayor Ben Cahoon and the Board of Commissioners surprised Kenny with the Order of the Long Leaf Pine.

Presented to individuals who have a proven record of extraordinary service to the state, the Order of the Long Leaf Pine is among the most prestigious awards presented by the Governor of North Carolina. Some of the guidelines by which recipients are selected for the award include contributions to their communities, extra effort in their careers and many years of service to their organizations.

“This means a lot to me,” Kenny said of the awards. “I really appreciate this.”