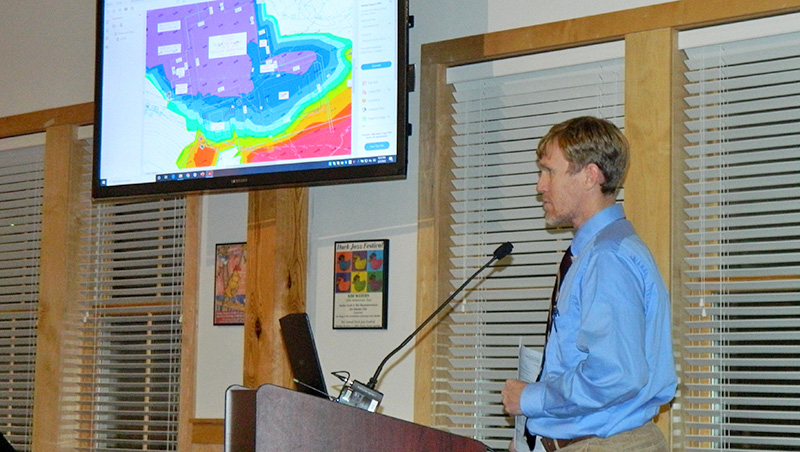 Michael Strader, director of engineering with Quible and Associates, spoke at a February 2 Duck Town Council meeting about plans to construct a new recreation center for the Barrier Island Station Resort at 1245 Duck Road. Strader said site topography would require as much as six feet of fill in certain areas, well in excess of the town's three foot limit. Philip S. Ruckle Jr. photo

During an introduction to the request, Duck’s director of community development Joe Heard explained that Barrier Island Station Resort officials would like to
build a 7,778 square foot recreation center at 1245 Duck Road. A gated neighborhood, the entire property covers about 21.76 acres with multi-family residential buildings constructed between 1985 and 1989.

Heard went on to say the intended construction site is centrally located and is the former site of a recreation center that was demolished in 2020. Because some areas of the property will require fill in excess of the town’s three foot limit, council would have to approve of a special use permit.

Heard added also that town council was not reviewing the entire development project, only the request to fill in excess of the town’s standard.

According to Michael Strader, director of engineering with Quible and Associates, the site will have additional parking and a building containing administrative offices, a recreation center and a swimming pool. However, in order to provide a level elevation for construction, some parts of the site will require as much as six feet of off-site fill material.

Strader said part of the challenge was that he was trying to construct a relatively large building on a site with rolling topography. Because the building’s footprint is so large, no matter where it is located or how it is situated on the property, substantial grading is necessary to create a flat area to accommodate it.

The only public comment on the project was from Tom Perkins, representing Ships Watch Board of Directors, who voiced considerable concern over water flowing onto Ships Watch properties just north of Barrier Island Station Resort.

In response, Heard advised that most of the water Perkins referenced actually comes from more than one source and almost all from outside the proposed construction area.

Strader then added that some of the proposed fill and grading for the site is designed to avoid stormwater runoff toward any adjoining neighborhoods and while he expected an improvement for the situation, he could not go on record saying it would be better, only that by capturing some of the existing runoff from an adjoining roadway it would not be any worse.

Just like the Duck Planning Board, which voted unanimously January 12 to recommend approval of the special use permit, council gave it a stamp of approval.

In other business for the evening, council authorized staff to study potential town code text amendments and continued an earlier discussion on establishing a Town Property Advisory Committee.

Although most council members appeared in favor of an Advisory Committee, almost all said they needed more information and additional time to think about it.

Mayor Don Kingston advised that he had mixed feelings and while more public input would help, the committee needed a more limited focus. Council then agreed to continue the discussion at a retreat scheduled later this month.