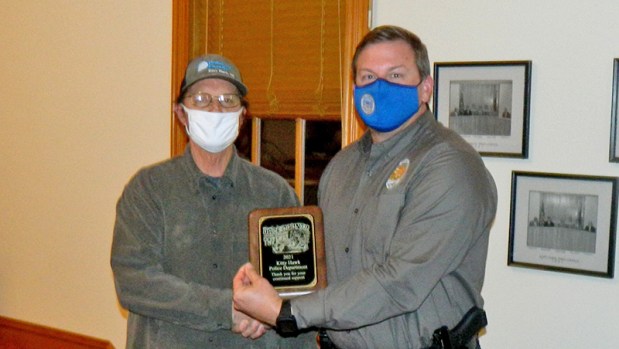 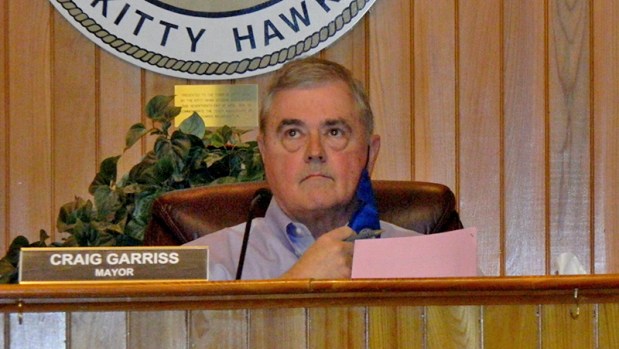 Kitty Hawk Mayor Craig Garriss led the Monday, February 7 Kitty Hawk Town Council meeting that saw a change to the town's separation zone between some commercial and residential districts and an amendment the definition of lot coverage to allow up to 500 square feet of the water area of a swimming pool be exempt from lot coverage calculations. Philip S. Ruckle Jr. photo

According to DeCou, who presented a plaque of appreciation to Police Chief Joel C. Johnson, some 160 motorcycles and 195 Jeeps participated in the annual event that raises money to help underprivileged youth in Dare County.

Adding that it was a very successful year, DeCou said there were about $4,500 in toys collected and along with monies from some other events, the group was able to donate $25,000 to the Dare County Center and $3,000 to a local church to provide Christmas to their kids. There are also $1,500 scholarships for each of the county’s high schools.

Among the regular business items for the night was a request to reduce the 50-foot separation zone between some commercial and residential zones when certain conditions are met.

During his explanation of the request details, Rob Testerman, the Kitty Hawk director of planning and inspections, advised that since the request is only for the BC-1 district, the change would affect only a couple of places.

Specifically, the buffer reduction from 50 feet to 20 feet would only be for portions of a commercial lot adjacent to a dedicated open space or where a recreational area is located on the adjoining residential development, such as along part of Seascape Golf Course and the area adjacent to the Harbour Bay playground. The result in those cases is a distance even greater than the required 50 foot separation.

Because the golf course is zoned residential the 50 foot separation requirement applies to the adjoining commercial use even though it is separated from any residential structures by a distance of 200 to 300 feet.

Speaking in favor of the change, Calfee Engineering’s Ralph Calfee said if the request is approved, the intent behind having a buffer between commercial and residential districts would still be met since in those areas where a dedicated open space or recreational area is located between a residential development and a commercial zone, the open space and recreational areas would be part of the buffer distance.

During a discussion on the requested change, councilman Jeff Pruitt said while he was in favor of the principle behind the change, he couldn’t support it because it just didn’t “seem quite right.”

Councilman David Hines pointed out that the change would only affect a couple of properties and Testerman added that unless one of the eligible properties underwent a complete renovation, it is likely that the reduced buffer would allow for little more than additional parking.

At the end of discussion, the vote to approve passed on a 4-1 vote.

Acting on a staff initiated request, council then approved an amendment to Section 42-1, which modifies the definition of lot coverage to allow up to 500 square feet of pool surface area to be exempted from lot coverage calculations.

According to Testerman, lot coverage refers to any area covered by buildings, parking areas, accessory structures, driveways and roads. One purpose for regulating lot coverage is to limit the intensity of developed and impervious areas on any given lot.

Because the current lot coverage definition does not exempt pool surfaces, added to the fact that a body of water is essentially impervious and additional water does not infiltrate but instead adds to the volume of water, the interpretation has been to include pool surfaces in lot coverage calculations.

Testerman went on to say, however, that in most instances there is a gap of a few inches between the top of the pool water and adjacent grade of the pool deck allowing a pool to act as a catch basin for some rainwater up to that point in which it has collected so much rainwater that the pool water level is flush with the surrounding pool deck.

“In other words,” Testerman explained, “pool surfaces create no additional runoff until the swimming pool is completely full.”

Other business for the night included scheduling two unrelated public hearings for the March 7 meeting. One hearing is for a zoning text amendment to 42-528 related to regulations and restrictions for accessory dwelling units and the other is a request for a special use permit to operate a medical office at 3933 Welch Street.

At the end of the evening’s business, council adjourned until the 6 p.m. March 7 meeting.