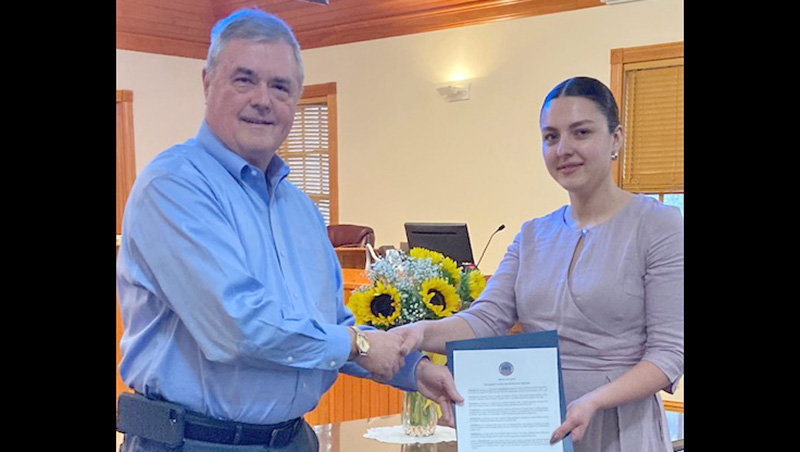 Following her comments at the March 7 Kitty Hawk Town Council meeting on current Ukraine events, Kitty Hawk Mayor Craig Garriss presented Anastasiia Forlano with a copy of a proclamation designating Kitty Hawk in solidarity with the Ukranian people. She was also given the bouquet of sunflowers shown in the background. Sandy Myers photo

First up was Southern Shores resident and Kitty Hawk business owner Anastasiia Forlano with a brief presentation of information about current Ukraine events.

Forlano said although she was born in Ukraine, she has lived here since 2012 and feels blessed to be a part of the Outer Banks community. She went on to say the people still there are caught in a fight for their lives resulting from an aggressive attack by Russian troops.

Forlano then explained that a GoFundMe account is being set up to help provide humanitarian aid to Ukraine. She explained further that Outer Banks Realty and the Outer Banks Rotary Club are working on establishing a non-profit organization to help collect funds to help Ukraine citizens affected by the conflict.

Forlano ended her comments saying a large number of people on the Outer Banks are ready and willing to help the Ukrainian people. She then added a plea that everyone consider some type of help for this important cause.

Following her comments, Mayor Craig Garriss pointed out that flowers on display in the meeting room and a Ukraine flag are a show of support for the Ukrainian people.

Garriss then read a proclamation stating that Kitty Hawk stands in solidarity with Ukrainian people and encourages all to join in condemnation of Vladimir Putin’s acts of war and Russia’s invasion of a free and democratic Ukraine.

The next series of brief introductions saw Kitty Hawk Fire Chief Mike Talley announce that Jasper Rogers would be filling a newly created position of Kitty Hawk deputy fire chief. He then went on to advise that following a comprehensive promotion process that David McCulloch, Jeremy Boice and Joe Case were selected to fill the positions of fire lieutenant.

The final fire department recognition for the evening included introducing Ron Tumolo to council as the 2021 Kitty Hawk Firefighter of the Year.

The next presentation included a two minute video recommending a newly designed welcome center be built on state-owned land where the Aycock Brown Welcome Center and Monument to a Century of Flight is currently located.

Considered an ideal location for a 30,000 square foot structure, proposed plans for the site call for a tribute to the Wright Brothers with a museum, world-class observatory, the world’s largest display of 12 historically-accurate Wright Brothers aircraft, a multi-purpose theater, an aircraft building workshop, an outdoor performance area, elegant café, gift shop, science, technology, engineering and mathematics (STEM) training classrooms, along with an extensive library and archive.

A mission control room will allow visitors an opportunity to fly a Wright Flyer simulator with several activities aimed at participation by children. In addition to ample visitor parking, there will be school and tour bus access and electric vehicle charging stations.

The multi-million dollar project honoring Orville and Wilbur Wright is expected to be fully funded by private investors with no additional cost to taxpayers.

The Wright brothers are credited with launching the aerial age on December 17, 1903 by flying the world’s first successful heavier than air motor-operated airplane.

“This is going to make Kitty Hawk famous,” said Garriss. “It will be the only one like it in the world.”

Garriss then praised councilmember Charlotte Walker for her work on the project, adding that it will be an enormous project that needs to be in Kitty Hawk.

Garriss encouraged everyone to contact their local and state representatives with support to speed the project along.

“This is a win-win for everybody,” said Walker. “The state does not get any revenue from that piece of property, and the rest area there needs some repairs and updating.”

Included in the evening’s agenda was a resolution acknowledging Kitty Hawk’s support of the State of North Carolina accepting a gift of vision from Ken Hyde of the Wright Experience and Bill Cress of Access Aerospace, LLC and other private donors to establish the Wright Brothers Tribute Museum and Observatory on state owned land at 5230 North Croatan Highway, Kitty Hawk, North Carolina.

Other business items for the evening included approval of a special use permit for a medical office at 3933 Welch Street, authorization for parking improvements to Luke and Bleriot streets, setting an April 4 public hearing for a special use permit to allow commercial crabbing and fishing at 3839 Moore Shore Road and selection of Whiting-Turner Contracting Company as the construction management company to oversee and coordinate construction of a new Kitty Hawk police station with room for a fire station bay and EMS substation.

According to town manager Andy Stewart, of the three proposals submitted in February, the selection committee scored Whiting-Turner as the top choice, well above A.R. Chesson and C.E. Gleeson.

Council also agreed to revisit a proposal to amend regulations and restrictions for accessory dwelling units at the April 4 meeting.

According to planning and inspections director Rob Testerman, following council’s recent adoption of several new definitions for accessory dwelling units, there were multiple calls from residents indicating the change created a number of unintended consequences. He added that most concerns focused on a requirement that ADUs be limited to the side and rear of a property.

Among the issues council looked at were a change in how the maximum height is measured in order to match other sections of code, the removal of a Register of Deeds filing requirement and to allow accessory dwelling units to be in other areas of a property than only to the side and rear of the primary dwelling structure.

Testerman explained that other accessory structures like a garage or shed are allowed anywhere on a lot provided they met setback requirements. However, having living space trips the requirement that it only be to the rear or side of a primary structure even if it appears similar to one with an office above it.

“There did not appear to be any justification for having one set of standards for one and allow the other to go anywhere on a lot,” Testerman explained. “The Planning Board did have some concerns but did unanimously recommend approval.”

The only apparent concern with any proposed changes appeared to be with the ability to allow additional curb cuts for additional driveways.

In response, Testerman advised that two curb cuts are already allowed, so the only change to code would be to allow living space above a structure making it an accessory dwelling unit that can be anywhere on the property.

Councilmember David Hines said also that he had received 39 calls on the issue, with none against, and at the end of discussion moved to adopt the proposed changes to Sec. 42-528 for regulations and restrictions pertaining to accessory dwelling units.

Although at first glance it appeared the motion passed with one no vote, Walker clarified that she too was a no vote. With Lynne McClean unable to attend the meeting, it was a split vote with Hines and Garriss in favor while Walker and Jeff Pruitt were opposed.

Council then agreed to revisit the issue with all attending in April.

Items approved in the consent agenda include:

●  February 7 council meeting minutes.
●  $36,000 for Public Works Department to purchase of a replacement truck.
●  a policy for American Rescue Plan Act of 2021 Coronavirus State and Local Fiscal Recovery Fund expenditures.
●  a budget for a project to be funded by the Coronavirus State and Local Fiscal Recovery Funds of H.R. American Rescue Plan Act of 2021.
●  a FY 22-23 budget calendar.
●  authorization to hire a highly-qualified fire captain candidate above normal step 10 of pay grade.
●  authority for an on-demand, as needed, collection service to replace the current quarterly scheduled pickup dates.
●   the resolution in support of a Wright Brothers Tribute Museum and Observatory.

At the end of business, council recessed until a 9 a.m. March 28 budget work session.

New leadership for Dare Board of Education; Dare County…