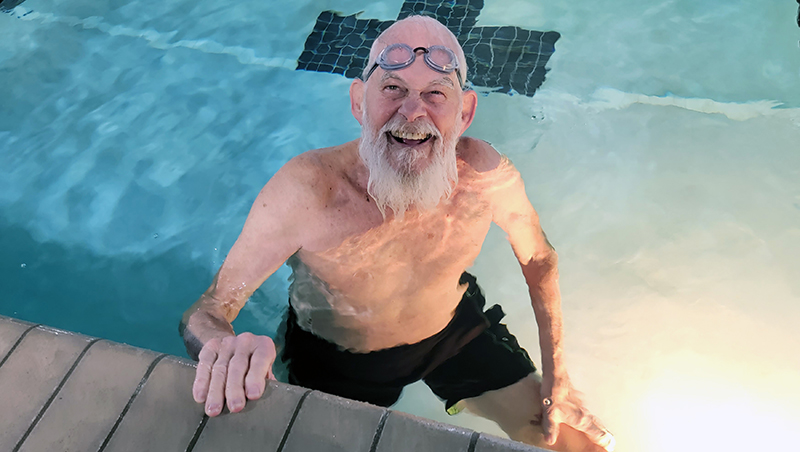 Charlie Erwin, 90, of Kitty Hawk takes a break at the wall after swimming laps in the 25-meter pool at the Outer Banks Family YMCA in Nags Head. He’s been a competitive swimmer his entire life. Daryl Law photo

With a youthful jump, Charlie Erwin, age 90, plunges into the YMCA pool in Nags Head. For him, swimming laps has been a life-long pursuit and he’s pretty good at it.

Each season, when the Senior Games roll around in springtime, Erwin is ready to give it a go. His philosophy in life? Never give up.

He’ll tell you his grandson, Blake Medler, keeps him going too and sometimes the young man asks Erwin “why?”

And Erwin wants to set some more records if he can keep swimming. This spring, in the Outer Banks Senior Games local meet he’ll look to qualify for the fall N.C. Senior Games meet in Cary. He’ll compete in the group for men ages 90 to 94. Last year, he placed first in seven events.

Erwin said in his younger years, he was called “a stud” and had plenty of success then too.

“When I was young, I was a good swimmer,” Erwin said. “Three or four years ago, I had a hip replacement; it screwed up my swimming – I’ve never swam well since.”

He’s also got a pacemaker and shoulder injury but day in and day out, Erwin’s in the 25-meter pool knocking out the laps. Most of the other senior swimmers know him and he’s apt to talk and socialize some while in the pool or on deck. These athletes thrive here like it’s their own fountain of youth.

At his Kitty Hawk residence, Erwin seems relaxed and happy to be surrounded by his things. The retired U.S. Navy bronze star recipient has his house adorned with swimming medals with ribbons and trophies.

There’s a 2007 U.S. Masters first place for 400-freestyle at Bayside Recreation Center in Virginia Beach where he set a record and then fourth place finish in the Fina World for the same event. He’s got more freestyle awards: a 2003 gold for the 400, a silver for the 200 and a bronze for the 50.

He’s got a trophy and photo of his 300-yard relay team in Vietnam too. “They had to kill the butterfly [leg], none of us could do it worth a damn,” he said smiling.

Erwin spent 22 years in the Navy, first “bouncing around” the North Atlantic before stints in California and Vietnam. He served on carriers, destroyers and oilers, he said. Erwin even told an interesting but not for print tale about “grubby ole sailors” and their drinking nights out in Sasebo, Japan.

But it was back home in a lake in the woods of Massachusetts that Erwin first learned to swim long distances.

“I would swim at a lake that was a mile and half long, that’s what got me going in distance swimming,” he said. It offered him a break away from taking care of his sister with special needs, Erwin added.

During the visit, out of nowhere, he produces a small trophy. “This is my first trophy, a third place in 1948,” he said. Next, he pulls out another one 10 times taller.

“I won this just after I graduated from Lowell High School in Massachusetts,” Erwin said. “The water was 56 degrees!” It was the same race as before but he wanted it more the second time and he was a better swimmer.

“The odds were not in my favor, people pulled out because it was too cold,” he added. Although he ended up being hypothermic, he won the race and has the trophy to prove it.

Since that time, he’s swam hundreds and thousands of laps. He keeps it up daily because exercise is “good for us and our health,” Erwin said.

Besides, he does better when he exercises.

For Erwin, swimming was the answer to hopes of becoming an athlete as a young man. He said he couldn’t excel at other sports like football, basketball or baseball.

Then Erwin told an interesting story about Blake being on the First Flight Middle School football team as a seventh grader last year. He did a lot of standing around cheering on the others until the coach needed something special.

“’Yeah, I’ll kick,’” Erwin said Blake told the coach. The excited grandson later told Papa: “’Now I’m in charge of the whole team, they’re all behind me [on kick-offs]!’”

That day Blake became the kicker. He had some immediate success with onside kicks and he became a hero, an MVP, Erwin said. Blake continued: “’Those guys call me MVP!”

Right away, he had respect in the locker room, too. He kicked many onside kicks and they recovered three in seventh grade and two in eighth, Erwin said.

“They don’t mess with him,” Erwin said. “Taking advantage of an opportunity, that’s what you have to do in life! Now, he’s doing well in other sports.”

Look for Erwin to lead the Outer Banks swimmers to yet another powerful year of swimming in the Senior Games.

For the record, Erwin was the first one to swim a complete mile in the Outer Banks Family YMCA pool when it opened back in 2001.