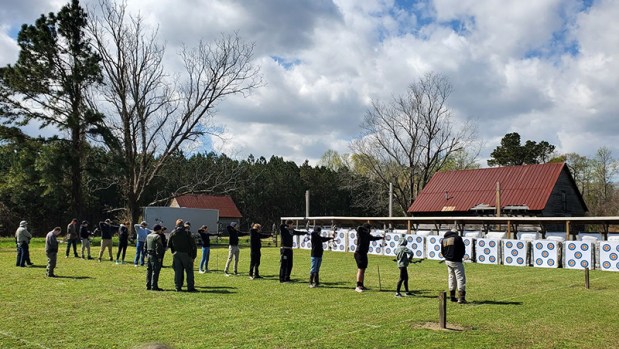 A recent donation to the Outer Banks Gun Club shooting range is expected to provide for improvements to the archery range and the access to it. Manteo Hunter Safety Education Team photo 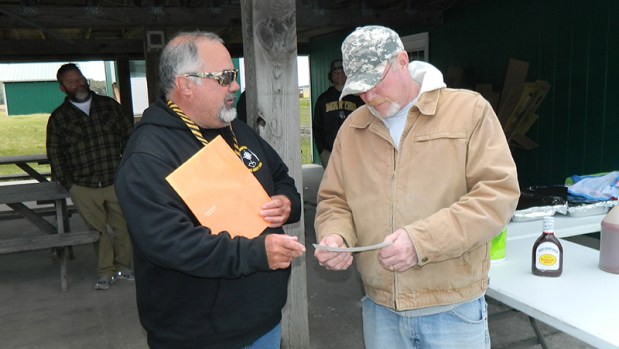 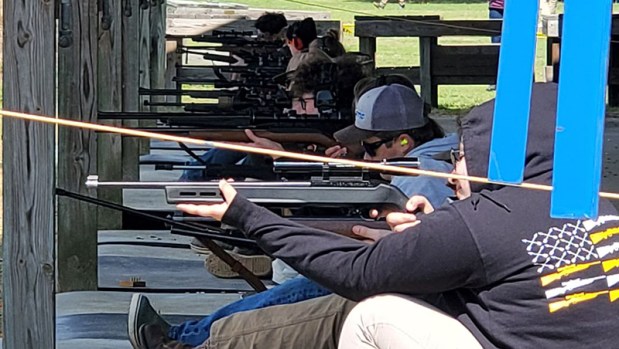 “Because of everything you do for us, the team and parents,” said Presgrave, “we would like to give you a check to go toward improving the facilities here at the range.”

Presgrave said it was because of the generous donations to the Hunter Safety Education Team that he was able to make the check presentation.

Clearly caught off guard by the donation, Wilson responded saying, “Young people, you are the future of the sport. There’s a lot of bad stuff in the news and some want to blame the gun. But it’s not the gun, it’s the person behind it and you are learning the right way, along with the safety and responsibility needed.”

According to Wilson, the 26-year-old Outer Banks Gun Club Shooting Range on Link Road in Manns Harbor is open to the public and has about 1,400 members. Although the property is owned by Dare County, the Gun Club has a low-rent agreement with the county. Volunteers take care of all the range maintenance requirements where local police departments, Sheriff’s deputies, Coast Guard, active military, gun club members and visitors to the Outer Banks train.

“We are non-profit,” said Wilson. “So everything that comes in goes right back into the range. All our people work for free building sheds, making range repairs, painting, building new targets and target stands. It’s all volunteer, nobody gets paid anything for the work out here.”

A real diverse crew that includes a retired nuclear plant operator, builders, electricians, former Navy Seals, they are not the only volunteers.

Presgrave explained that the Hunter Safety Education Team was started by a local group of volunteers who wanted to establish a program that taught firearm safety and hunter education. While many people were involved, Jeff James, Barry Sawyer and Britton Shackelford were among the founding members who ran the program solely off of a yearly $1,500 from Dare County Parks and Recreation.

Open to Manteo students from sixth through the 12th grade, children are taught to use .22 long rifles for competition shooting, shotgun using the clay thrower system, and archery. First Flight has a similar program.

Presgrave, who took over as head coach in 2020, said the team typically meets twice a month November through March at the Outer Banks Gun Range. The primary goal is still to provide a safe learning environment where youth are given the opportunity to learn about gun and hunter education safety.

“We want every child that goes through our program to come out safer,” Presgrave added. “We have more than 70 kids in the shooting program for schools and took almost 50 to District One for northeastern North Carolina at the Columbia 4-H Center competition this year.”

Presgrave went on to say the competition event includes a full day of shooting where game wardens set up targets and do all the judging.

“They like to hunt too,” Presgrave added, and it provides some interaction between them and the students.

Presgrave said the range has an area for skeet, .22 long rifles, a pistol range where targets can be moved, a rifle range with targets at 15, 50 and 100 yard ranges and a fairly recent addition of an archery area.

“We had never really had any archery coaches so our program didn’t spend a lot of energy focusing on that aspect of the program,” explained Presgrave. “In 2020, Tami and Rich Harper, whose son Zane is a member, stepped up and made that part of our program thrive with the little bit of equipment that we have. The Finn Gaddy Family has given us a very generous donation earmarked for improvements to the gun club, focusing on the archery range, so we are very blessed to have a supportive community who works hard to help these kids grow and learn.”

“Practice is from November to March and competition teams are chosen by attendance, attitude and accuracy,” she explained. “We care the most about safety and making a difference in the lives of kids. We have witnessed so many examples of our older students coming in to help guide our new young members and to show them the ropes, especially in .22 where the competition shooting requires four different stances and for us older coaches it’s hard to get in those positions so our older kids proudly show the younger ones how it’s done.”

Both the Presgraves affirmed that when they keep kids safe, and helping them learn how to properly handle firearms, then they have done their job because while many students do go to competition every year, there’s more to the program than competition.

“We focus on trying to make them safer and to have fun,” Ben explained. “The competition is there, but the main thing is there are 70 some kids here that are so much safer than they were six months ago. They are all friends, and good kids held to the highest standards. There is no bullying or horse play, if they do we’ll throw them off the team. It’s sometimes a little stressful at the beginning of the season, but none of us have any extra holes.”

Presgrave added that the team would like to see some improvement to the archery range and the access to it. That way parents would be able to watch.

“Currently we have to wear boots every time it gets wet,” he added with a chuckle.