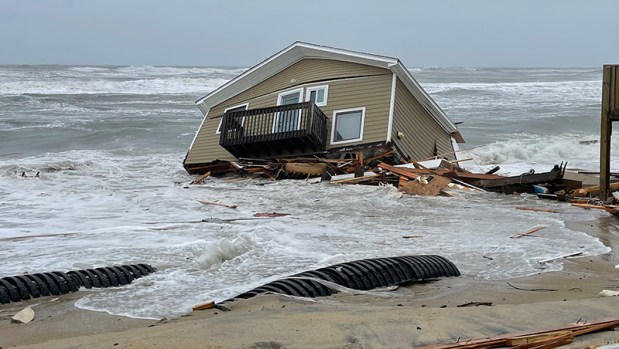 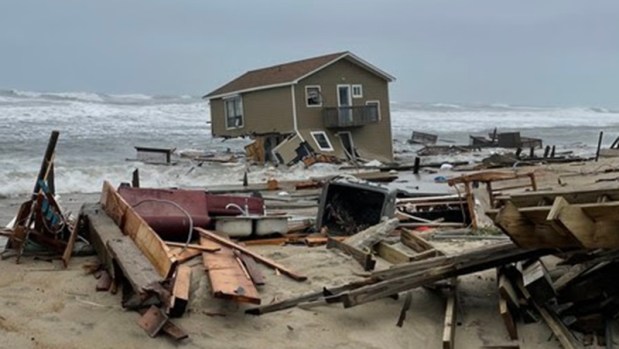 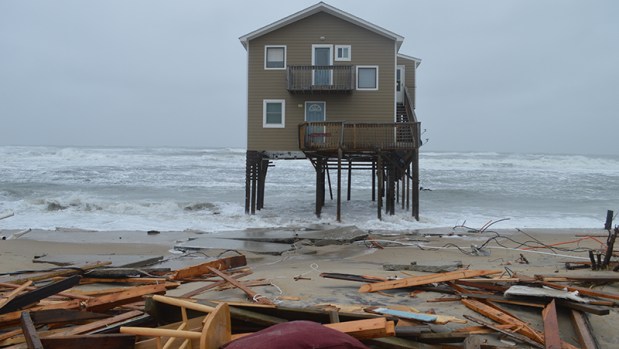 This house, located at 24265 Ocean Drive in Rodanthe, went in the ocean at 1 p.m. on Tuesday, May 20, 2022. The owner of this structure has secured the necessary special use permit for cleanup. Debris from Tuesday morning’s collapsed house is on the beach and cracked concrete was close to the second house before it collapsed. Mary Helen Goodloe-Murphy photo 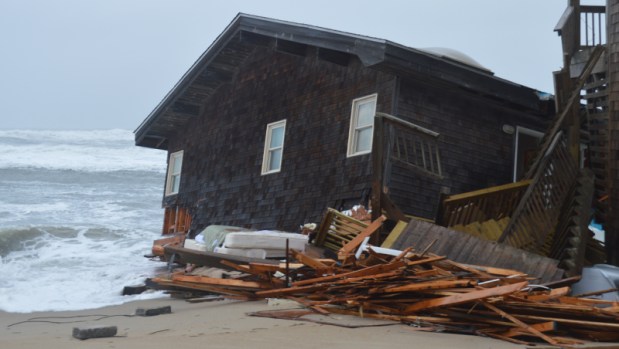 Sometime early Tuesday morning, the house at 24235 Ocean Drive in Rodanthe collapsed into the Atlantic Ocean. House debris, lumber and pilings are now on the beach or in the water. The beach in front of Ocean Drive is closed. Mary Helen Goodloe-Murphy photo 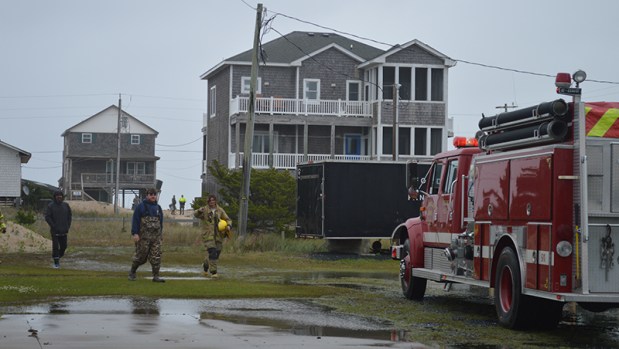 On Tuesday morning, volunteer members of Chicamacomico Banks Fire and Rescue Department responded to a call from Ocean Drive about a transformer sparking. The cause was salt build up. By 1 p.m. Tuesday, the station’s volunteers had completed three patient transfers. The department uses a five-ton military truck to move patients from Rodanthe through Pea Island National Wildlife Refuge to the south end of Oregon Inlet Bridge to meet up with Dare EMS. Mary Helen Goodloe-Murphy photo

Two houses leaning into the ocean finally collapsed on Tuesday, May 10, 2022.

Both houses were unoccupied.

The first house, at 24235 Ocean Drive in Rodanthe, hit the water in the early morning hours Tuesday. Waves regularly washed under the structure, built in 1985. The house had 2,592 square feet of space and was valued at $376,400 by Dare County. 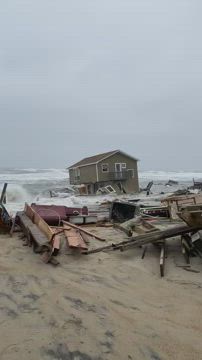 House debris like a sofa and mattresses were already on the beach along with lumber with protruding nails from the first house collapse.

The first house owner, Ralph A. Patricelli, of Monte Rio, Calif., according to Dare County’s records, has secured a special use permit for cleanup and hired contractor W.M. Dunn Construction from Powells Point to clean up the mess.

The second house owner Hien Hoang Pham, of Knoxville, Tenn., has also secured a special use permit for cleanup.

National Park Service has closed the beach along Ocean Drive to protect the public from hazardous debris. Law enforcement officials will close Ocean Drive shortly. Visitors are cautioned to stay away from the beach in this area, reports a Cape Hatteras National Seashore media release.

Late Tuesday morning, seashore staffers were surveying south of the collapse to determine how far the debris field had spread.

The northernmost house on Ocean Drive is also leaning oceanward. That owner has just about completed the permit process.

As with a Feb. 9 house collapse, the National Park Service will coordinate cleanup activities with the house owner and the public.