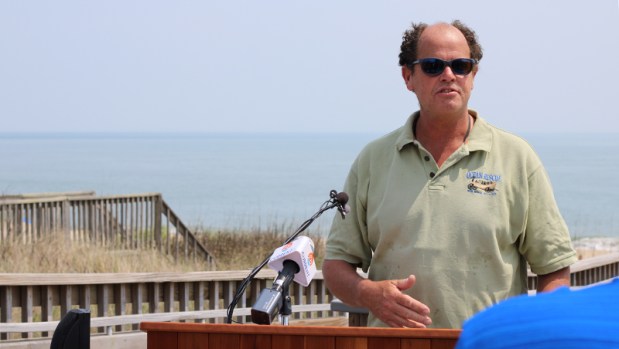 Kill Devil Hills Ocean Rescue director David Elder urges beachgoers not to dig holes greater than knee deep and to fill them in at the end of the day. Summer Stevens photo 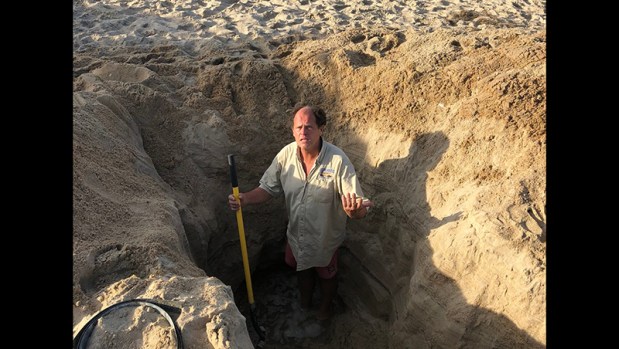 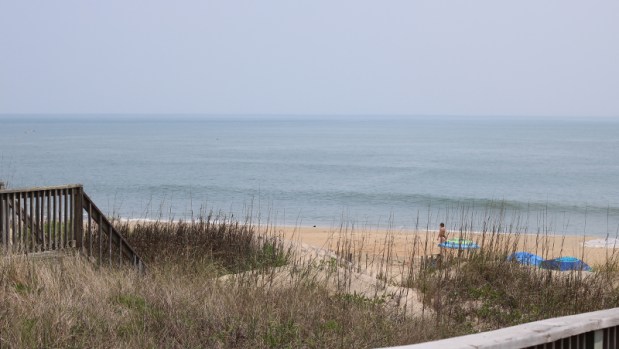 Outer Banks Ocean Rescue officials held a press conference Friday, May 20 to alert the public of the dangers of holes left unattended on the beach.

The press conference followed a Kill Devil Hills social media post that gained community traction showing Ocean Rescue director David Elder inside a seven-foot hole at the beach. The post has been shared almost 500 times, proof that this is an issue that concerns Outer Banks residents.

Holes on the beach can pose hazards for beachgoers and for lifeguards, especially those who ride ATVs. “When we encounter a hole, our heart stops for a minute. The first question we ask is, ‘Was someone in that hole?’ And then, what damage has been done to my vehicle?” said Cole Yeatts, Kitty Hawk Ocean Rescue director. “We ask all individuals, have a good time but be responsible.”

Injury or death from large holes on the beach can occur a variety of ways. Children who dig or tunnel very large holes are at risk if the hole collapses in on itself, which can happen when water flowing in the bottom of the hole causes instability. Large volumes of sand – which can weigh between 60 and 100 pounds per square feet according to Nags Head Ocean Rescue director Chad Motz – can fall quickly. “That’s a lot of weight coming down on top of you,” Motz said.

Last week, a New Jersey teen died when the 10-ft hole he was digging with his sister collapsed, trapping them both.

Another hazard can occur when a hole, even a shallow one, is dug close to the water level and becomes filled with water from a wave. “For me, the hole was just over knee deep,” said Elder as he relayed a rescue story. “She was laying in the hole . . . [When the wave came] she was now in very dense, wet sand. She could not sit up. It was a life hazard,” he said.

Holes can cause injury to unsuspecting walkers or runners on the beach, and can also be a threat to sea turtles who come up from the water to find a nesting spot.

According to Ocean Rescue officials, unattended holes are not an uncommon occurrence. Lifeguards encounter them daily.

The issue is not digging holes; lifeguards recognize that this is an enjoyable activity for beach goers. The concern comes from the depth of holes and the holes that are left unfilled at the end of the day. “Digging holes is ok,” said KDH assistant Ocean Rescue director Ben Battaile. “But we want you do it safely – no deeper than knee level.”

The public is encouraged to check in with a lifeguard upon arriving at the beach to check conditions and to contact Dare County Central Communications at 252-473-3444 with beach questions or concerns or to report an unattended hole. Visitors can also text “OBX Beach Conditions” to 77295 for daily updates.