Hurricane season: What’s in a name? 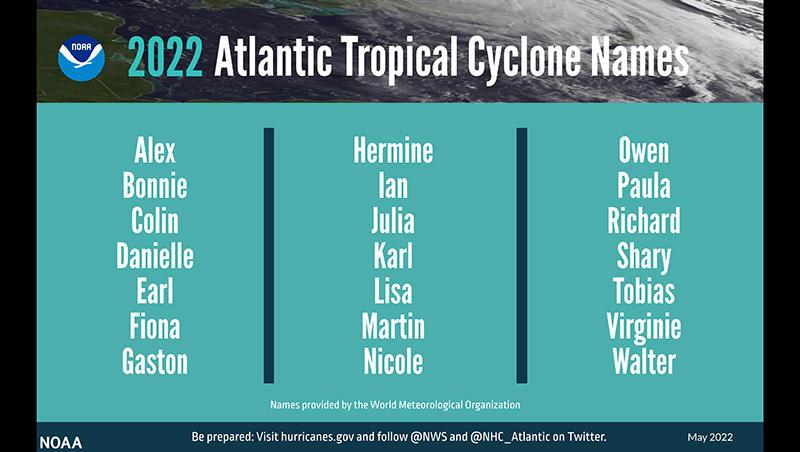 A summary graphic showing an alphabetical list of the 2022 Atlantic tropical cyclone names as selected by the World Meteorological Organization. The official start of the Atlantic hurricane season is June 1 and runs through November 30. NOAA image

With the official Atlantic hurricane season running June 1 to November 30 each year, the current conditions in the Gulf are cause for concern with some forecasters.

Although it is possible for a hurricane to form during any month of the year, maximum hurricane activity often occurs in early to mid-September. The prediction for the 2022 hurricane season is for “above average” activity, with 19 named storms. That includes nine hurricane-force storms and four major hurricanes predicted.

What are storm names for the 2022 Atlantic hurricane season?

Hurricanes have been tracked since the early 1870s with the basic concept of a hurricane season beginning in 1935. Early tracking used a cumbersome latitude-longitude identification method with only the most severe hurricanes given names, often for the place where they did the most damage.

In 1950, the U.S. Weather Bureau began using a phonetic alphabet (Able-Baker-Charlie) system for storms, which proved to be quicker and less subject to error than the older system in written as well as spoken communications, especially when two or more tropical storms occur at the same time.

In 1953 the National Hurricane Center abandoned the phonetic alphabet and female names were substituted until 1979 when the World Meteorological Organization and the U.S. National Weather Service switched to a list of names that also included men’s names.

Today there are six different lists of names made up by meteorologists at the World Meteorological Organization. The first tropical storm of the season is given a name that starts with A, the second storm name starts with a B, and so on. Letters Q, U, X, Y and Z are not used since there are so few common names starting with those letters.

Each name is used in rotation and recycled every six years. That means the 2022 list will be used again in 2028. The only time that there is a list change is if a storm is so deadly or costly that the future use of its name on a different storm would be confusing or inappropriate. In the event that more than 21 occur in a given season, a supplemental list of names is used.

There are different name lists for Atlantic and eastern Pacific tropical storms.