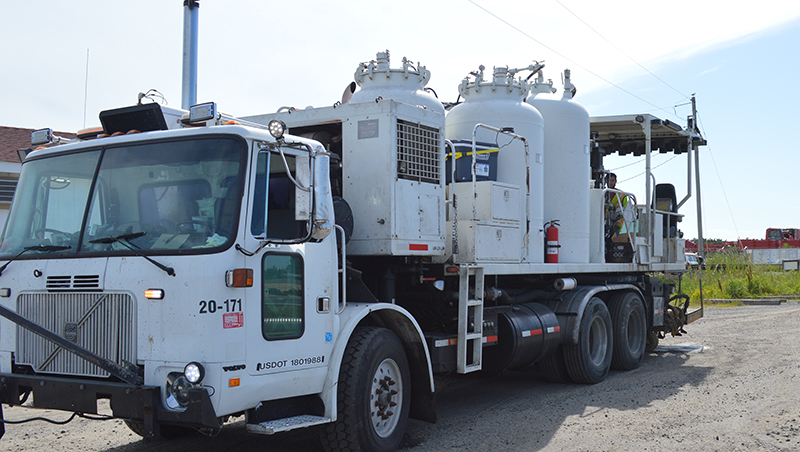 This large truck is used to paint lines on roadways and bridges. On Monday, the truck painted most of the lines at the roundabout at the south end of the Rodanthe Bridge. The contractor is T.M.I. Services Inc., of Graham. Mary Helen Goodloe-Murphy photo

On Tuesday morning, June 7, 2022, at the south end of the Rodanthe bridge, NCDOT officials were anticipating the arrival of painting machinery and traffic controllers to finish the Rodanthe Bridge.

At the roundabout, the striping crew needed to add a few lines and take up some old ones. Traffic controllers will direct single lane traffic while that work is going on.

Additionally, reflectors need to be placed on the asphalt bridge approaches. Reflectors attached with an epoxy adhesive are already on the bridge deck.

Once finished at the roundabout, the paint crew and traffic controllers will move to the north end of the bridge. Striping will tie the existing NC 12 pavement to the bridge’s asphalt approach. Old lines marking the detour route will be removed. Again, single lane traffic will be needed. Reflectors will be the final touch.

At some point when the work is done, an announcement will be made to remove the barricades and open the bridge and let vehicular traffic flow along the new Rodanthe Bridge.