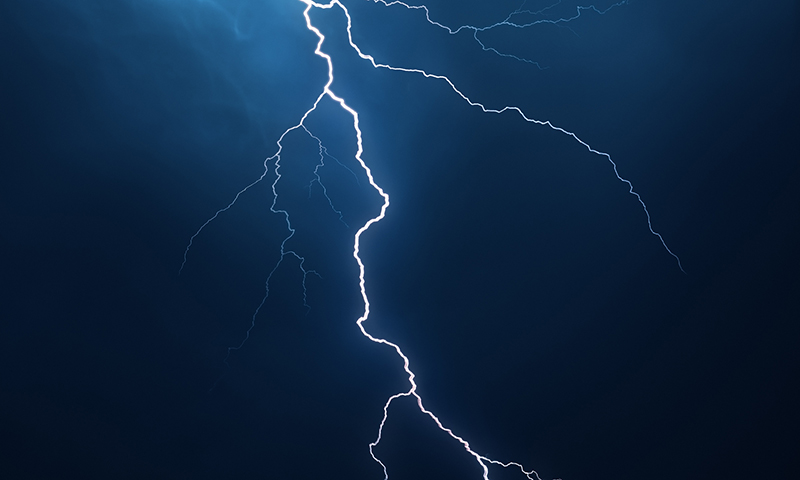 You don’t have to be in the middle of a summer storm to witness a lightning strike. Although most lightning occurs in the summer, people can be struck at any time of year.

According to the NOAA website too many people wait far too long to get to a safe place when thunderstorms approach. That delay, unfortunately, can lead to many of the lightning deaths that occur each year.

In its simplest form, lightning is a violent and sudden electrostatic discharge where two electrically charged regions in the atmosphere temporarily equalize themselves. That usually happens during a thunderstorm but that is not the only time.

Lightning is one of the oldest observed natural phenomena on earth. It can be seen in volcanic eruptions, extremely intense forest fires, surface nuclear detonations, heavy snowstorms, in large hurricanes and, obviously, thunderstorms.

Overall lightning strikes the United States about 25 million times a year. Although the odds of being struck by lightning in any given year are only around 1 in 500,000, you do not want to be the one.

According to the National Weather Service storm data, during the past 30 years (1989-2018) the U.S. has averaged 43 reported lightning fatalities per year. Only about 10 percent of the people struck by lightning are killed, the rest are left with various degrees of neurological damage and disability.

Lightning can strike just about anything tall, including trees, domestic and wild animals and humans. However, trees do seem to be a frequent target. Contrary to popular opinion, there is no “safe” location outdoors. People have been struck in sheds and makeshift shelters. However, shelter is possible within an enclosure of conductive material such as an automobile.

Lightning strikes thousands of trees each year.  When lightning does strike a tree, it will leave a reminder of the visit. Trees are frequent conductors of lightning to the ground. Since sap is a poor conductor, its electrical resistance causes it to be heated explosively into steam, which blows off the bark outside the lightning’s path. In following seasons trees overgrow the damaged area and may cover it completely, leaving only a vertical scar. If the damage was severe, the tree may not be able to recover and decay sets in, eventually killing the tree.

Trees are natural lightning conductors and known to provide protection against lightning damage to nearby buildings by diverting lightning strikes away from nearby structures.

Each lightning strike can reach more than five miles in length and produce temperatures greater than 50,000 degrees Fahrenheit and an electrical charge of 100 million volts. At any given moment, there are 1,800 thunderstorms in progress somewhere across the earth. Lightning detection systems in the United States sense an average of 25 million lightning strikes per year.

If outdoors when a storm approaches, you can slightly lessen the threat of being struck by lightning, but keep in mind that you are NOT safe outside. When thunder roars, it is time to go indoors. Find a safe, enclosed shelter.

When a safe location is not nearby and you absolutely cannot get to safety, remember these National Weather Service tips:

1. Avoid open fields, hilltops or a ridge top.
2. Stay away from tall, isolated trees or other tall objects. If you are in a forest, stay near a lower stand of trees.
3. If you are in a group, spread out to avoid the current traveling between group members.
4. If you are camping, a tent offers NO protection from lighting; move to a valley, ravine or other low area.
5. Stay away from water, wet items and metal objects, such as fences and poles. Water and metal do not attract lightning but they are excellent conductors of electricity. The current from a lightning flash will easily travel for long distances.

Below are some key National Weather Service safety tips for you, your pets and your home:

1. Stay off corded phones. You can use cellular or cordless phones.
2. Don’t touch electrical equipment such as computers, TVs or cords. You can use remote controls safely.
3. Avoid plumbing. Do not wash your hands, take a shower or wash dishes.
4. Stay away from exterior windows and doors that might contain metal components leading from outside your home to the inside.
5. Stay off balconies, porches and out of open garages or carports.
6. Do not lie on concrete floors or lean against concrete walls.
7. Protect your pets: Dog houses are not safe shelters. Dogs that are chained to trees or on metal runners are particularly vulnerable to lightning strikes.
8. Protect your property: Lightning generates electric surges that can damage electronic equipment some distance from the actual strike. Typical surge protectors will not protect equipment from a lightning strike.
9. Do not unplug equipment during a thunderstorm, that increases the risk you could be struck.