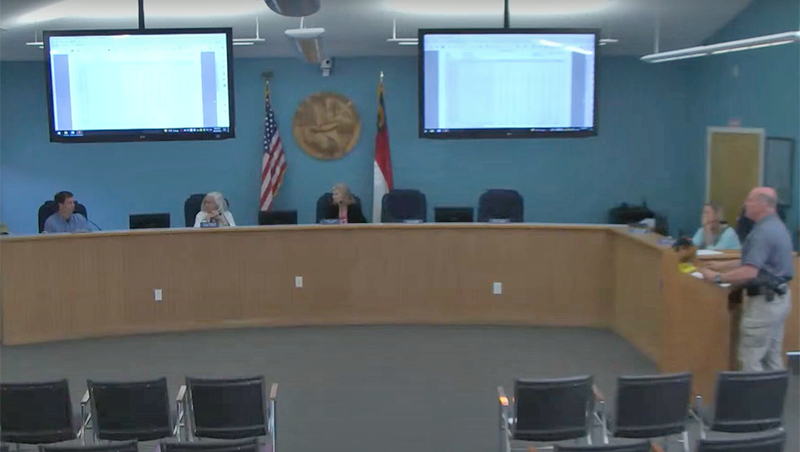 “Eventually, you’re just going to have to say, ‘You know, we've done everything we can,’” said Southern Shores Police Chief David Kole at the June 21 council meeting in response to the town’s ability to solve the traffic issues. Still from Southern Shores video

At the peak of tourism season, Southern Shores officials are asking each other if traffic mitigation efforts are actually helping, or just moving the problem from one part of town to another.

The first issue, which can’t be solved at this time, is the sheer volume of cars traveling through Southern Shores to reach the northern beaches. According to corollaguide.com, there are more than 5,000 rental homes in Corolla and Corolla, totaling up to 50,000 people a week.

Until the Mid-Currituck Bridge can be built – which is still pending litigation – cars will continue to pour through Kitty Hawk, Southern Shores and Duck en route to Corolla. Many of these vehicles are seeking shortcuts through residential streets, rather than staying on US 158 and making the left on NC 12 onto the Town of Duck. In some circumstances, GPS navigational systems are suggesting these shortcut routes.

The hardest hit is S. Dogwood Trail, which runs parallel to NC 12 for over two miles, and its neighboring streets that connect with Duck Rd (NC 12) including Hickory Trail, Hillcrest Drive, Sea Oats Trail and others.

The numbers of cars traveling on S. Dogwood on weekends (Friday, Saturday, Sunday) in June are staggering – one weekend in June saw 8,244 vehicles on the residential street, about half of which were on Saturday.

The town has placed barricades blocking one lane of traffic with “Local Traffic Only” signs at about 10 different locations, with mixed results. While town manager Cliff Ogburn said it seems more people are adhering to the signs this year compared to last year, it’s likely causing backups in other areas. “We blocked Hickory Trail entirely at East Dogwood Trail for two weekends. But the demand it put on other streets was unbearable,” he said in a June 29 email to The Coastland Times.

Part of the problem is that the police cannot pull someone over or stop someone for going around those “Local Traffic Only” signs, nor can they pull someone over for suspicion of not being a resident. “That has created a lot concern amongst our residents that we’re not doing anything, which is not the case,” Police Chief David Kole said at the June 21 town council meeting.

For Southern Shores, the issues are compounded by both the north and south end of town.

In the south, they have researched options for putting up a “No Left Turn” sign at the intersection of US 158 and S. Dogwood located in Kitty Hawk. However, according to Mayor Elizabeth Morey, both the intersection and the traffic light are under the jurisdiction of NCDOT, and they are not willing to implement the “No Left Turn” without the approval of Kitty Hawk.  “The elected officials in the Town of Kitty Hawk declined to support implementing that, so therefore we’re not doing it,” said Mayor Morey at the council meeting.

On the other end of town, Morey said that the previous Southern Shores mayor had asked the Town of Duck elected officials to try to implement something to mitigate the pedestrians that continue to go back and forth across the road on the south end of Duck, after a traffic study revealed that pedestrian crossings increase the vehicular gridlock.

She concluded, “That’s how democracy works, folks, so we have asked our partners, the partners have done what they chose in the best interest they thought, and that’s where we are.”

When asked if he recommended that the town council do anything different, Kole responded, “…To be honest with you, I applaud everybody. I applaud everybody that’s up on this council. I’ve said this many times and many years – the only thing that changes is the people up here; traffic is still the traffic. Until we can get that bridge, I don’t have the answer for you, but I can tell you that that eventually, you’re just going to have to say, ‘You know, we’ve done everything we can.’ Because sometimes we end up causing more of a problem by trying to solve that problem.”

The Town of Southern Shores filed an amicus brief (friend of the court) in favor of the Mid-Currituck Bridge project on July 13 in the 4th Circuit Court of Appeals, gaining support from neighboring towns and counties.